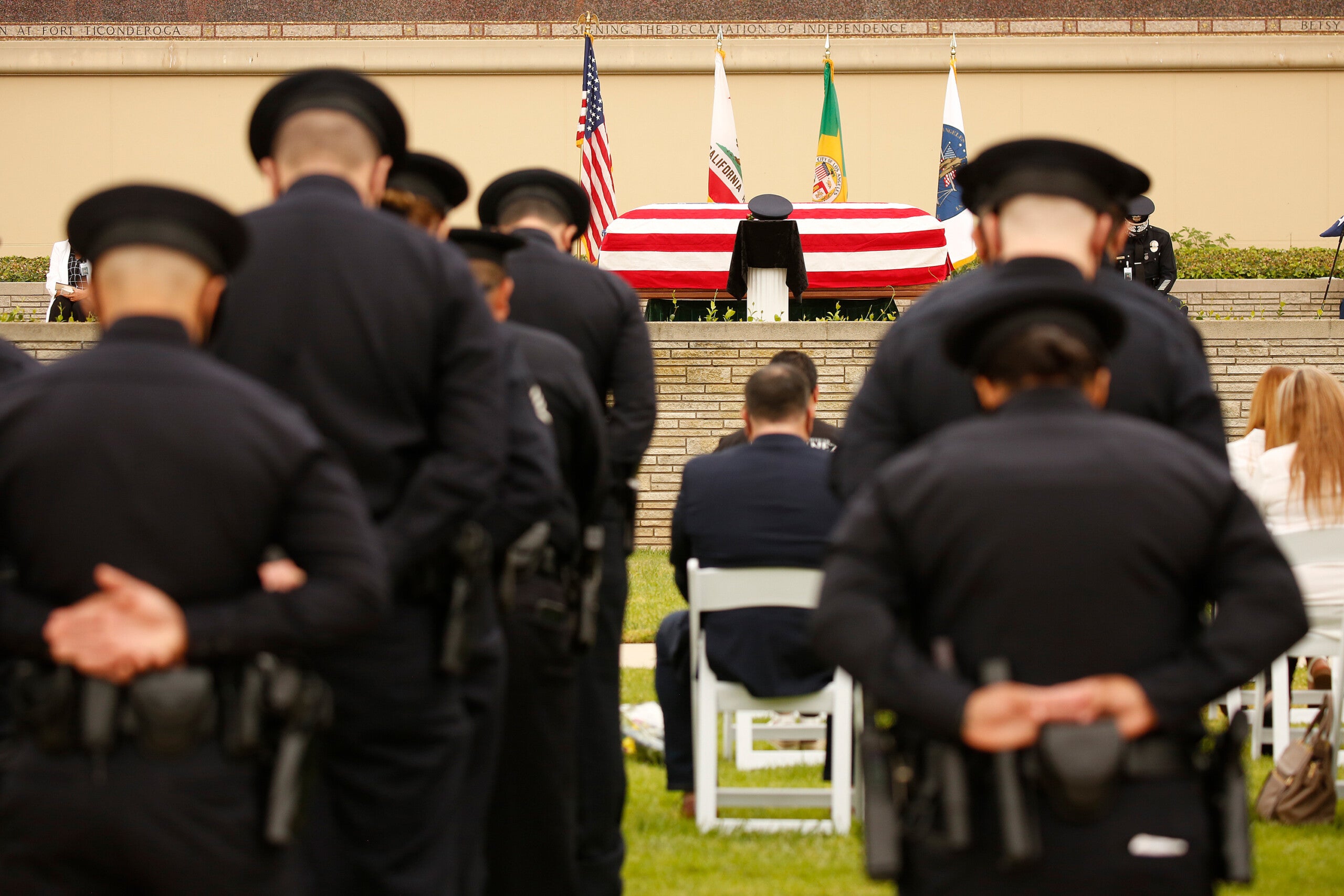 LOS ANGELES, CA - AUGUST 06: LAPD officers, family and friends attend the funeral of Los Angeles Police Department Officer Valentin Martinez, the agencys first sworn employee to die of complications from the COVID-19. The social distance memory service was held at Forest Lawn Hollywood Hills Hall of Liberty this morning. Martinez was a 13-year veteran of the department and is presumed to have contacted the virus on duty. He was 45 when he died on July 24, 2020, leaving behind his mother, Maria Martinez, his siblings and his domestic partner, Megan Flynn, who is pregnant with their twins. Los Angeles on Thursday, Aug. 6, 2020 in Los Angeles, CA. (Al Seib / Los Angeles Times via Getty Images)
by: Harmeet Kaur, CNN
Posted: Sep 3, 2020 / 03:09 PM EST / Updated: Sep 3, 2020 / 03:55 PM EST

(CNN) — More police officers have died from COVID-19 this year than have been killed on patrol.

That’s according to the Officer Down Memorial Page (ODMP), a nonprofit organization that tracks law enforcement fatalities in the line of duty.

At least 101 officers have died from COVID-19, while at least 82 have died by other means, as of Thursday, according to ODMP.

The organization is working to verify an additional some 150 officers who are presumed to have died after becoming infected on duty, said communications director Jessica Rushing wrote in an email to CNN.

Gunfire is the second-highest cause of death, which has killed at least 31 officers this year, according to ODMP.

The toll could surpass 9/11 officer deaths

The toll from the coronavirus pandemic has been so high that it could surpass the number of law enforcement officers who died as a result of the 9/11 terrorist attacks.

“Based on the number of Covid cases we have coming in each day, we think it is very possible and even likely that COVID will surpass 9/11 as the single incident with the highest line of duty death toll in the country,” Rushing said.

Seventy-one officers were killed when the World Trade Center in New York collapsed, and one died in the attack in Shanksville, Pennsylvania. Since then, an additional 311 officers have died from a 9/11-related cancer, the organization says.

The National Law Enforcement Officers Memorial Fund (NLEOMF) attributes a similar number of officer deaths to Covid-19. The organization lists 111 officers on its website who have died of the virus, as of this writing.

Texas has seen the most officers die from Covid-19 with 24 deaths, followed by Louisiana with 12 deaths, NLEOMF reported.