Defense official: Arson suspected as cause of Navy ship fire 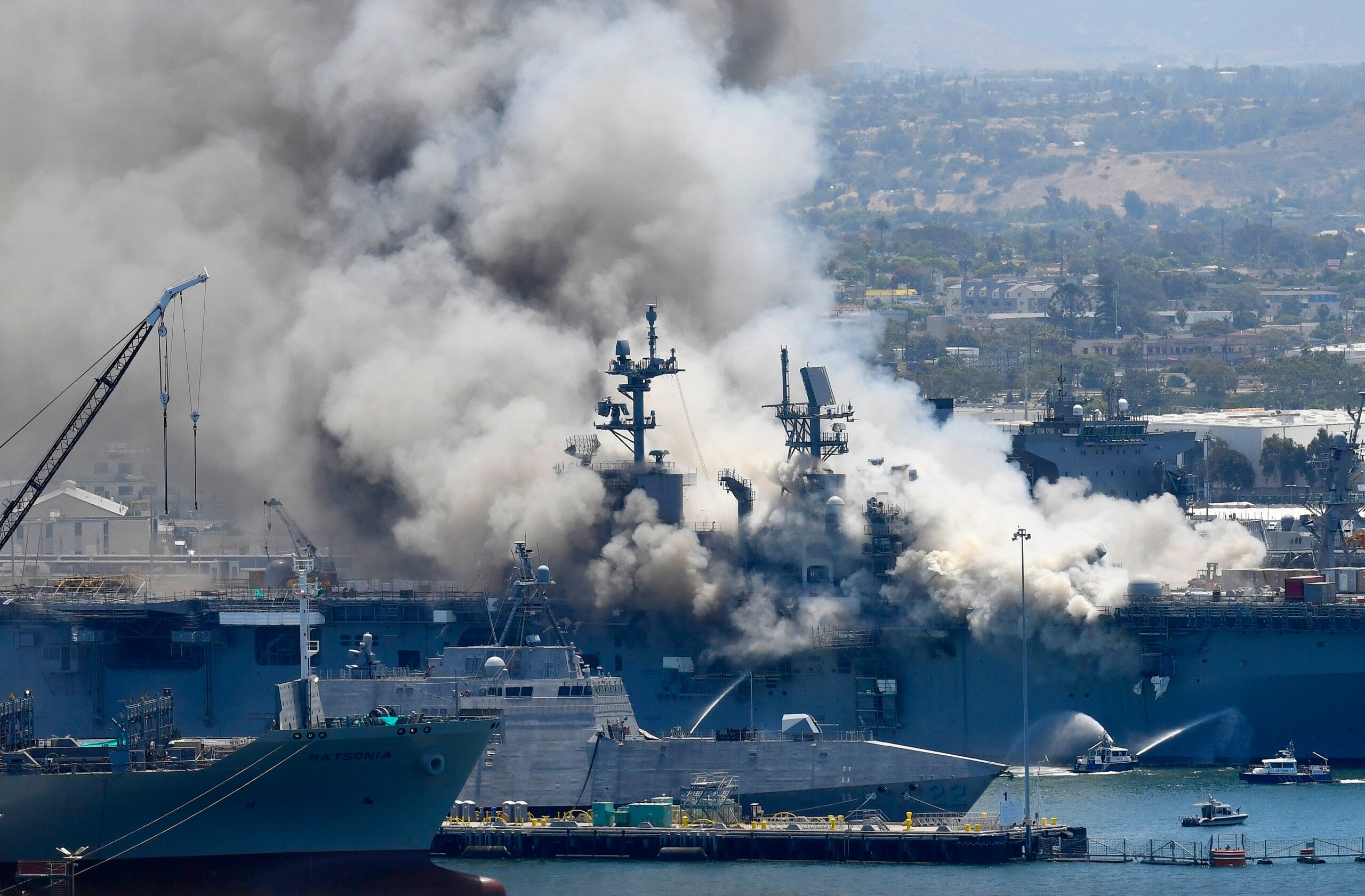 FILE - In this July 12, 2020, file photo, smoke rises from the USS Bonhomme Richard at Naval Base San Diego in San Diego, after an explosion and fire on board the ship at Naval Base San Diego. A senior defense official says arson is suspected as the cause of a July 12 fire that left extensive damage to the USS Bonhomme Richard and a U.S. Navy sailor is being questioned as a potential suspect. The official, with knowledge of the investigation, spoke Wednesday, Aug. 26, 2020, to The Associated Press on condition of anonymity to provide details not yet made public. (AP Photo/Denis Poroy, File)
by: By JULIE WATSON and LOLITA C. BALDOR Associated Press
Posted: Aug 26, 2020 / 10:02 PM EST / Updated: Aug 26, 2020 / 10:02 PM EST

SAN DIEGO (AP) — Arson is suspected as the cause of a July 12 fire that left extensive damage to the USS Bonhomme Richard docked off San Diego, and a U.S. Navy sailor was being questioned as a potential suspect, a senior defense official said Wednesday.

The sailor was being questioned as part of the investigation by the Naval Criminal Investigative Service and the Bureau of Alcohol, Tobacco, Firearms and Explosives, the official said, adding that defense department leaders were notified of the development. The official, with knowledge of the investigation, spoke to The Associated Press on condition of anonymity to provide details not yet made public. The sailor was not detained.

The amphibious assault ship burned for more than four days and was the Navy’s worst U.S. warship fire outside of combat in recent memory.

The ship was left with extensive structural, electrical and mechanical damage and its future remains uncertain.

The development in the investigation was first reported by KGTV, the ABC affiliate in San Diego. The Navy declined to answer questions.

“The Navy will not comment on an ongoing investigation to protect the integrity of the investigative process and all those involved,” said Lt. Tim Pietrack, a Navy spokesman. “We have nothing to announce at this time.”

The Naval Criminal Investigative Service also declined to comment on the case.

The amphibious assault ships are among the few in the U.S. fleet that can act as a mini aircraft carrier. If the Bonhomme Richard is not repaired, it could cost the Navy up to $4 billion to replace it, according to defense analysts.

The Bonhomme Richard was nearing the end of a two-year upgrade estimated to cost $250 million.

About 160 sailors and officers were on board when the flames sent up a huge plume of dark smoke from the 840-foot (256-meter) amphibious assault vessel, which had been docked at Naval Base San Diego while undergoing the upgrade.

Chief of Naval Operations Adm. Mike Gilday visited the ship a day after the blaze was extinguished. He said then that the Navy thought it had the fire under control only hours after it broke out the morning of July 12 in the ship’s lower storage area, where cardboard boxes, rags and other maintenance supplies were stored. But winds coming off the San Diego Bay whipped up the flames and the fire spread up the elevator shafts and the exhaust stacks.

Then two explosions — one heard as far as 13 miles (21 kilometres) away — caused it to grow even bigger, Gilday said. The Navy was looking into what caused the explosions, though Gilday said at that time that they had not found any indications yet of foul play.

Firefighters attacked the flames inside the ship while firefighting vessels with water cannons directed streams of seawater into the ship and helicopters made water drops.

More than 60 sailors and civilians were treated for minor injuries, heat exhaustion and smoke inhalation.