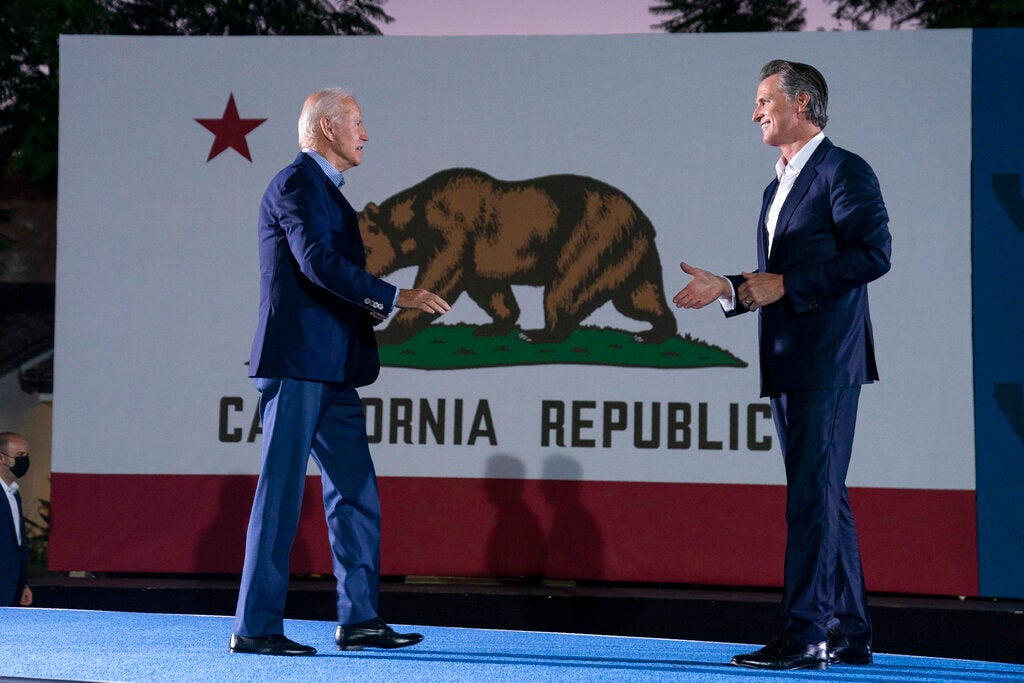 LONG BEACH, Calif. (AP) — With Gov. Gavin Newsom’s fate at stake, Californians on Tuesday cast the last of the ballots that will decide whether he continues to lead them or if the nation’s most populous state veers in a more conservative direction amid anger over his actions during the COVID-19 pandemic.

Newsom, a Democrat who is leading in polls, is only the fourth governor in U.S. history and the second in California to face a recall. He was elected in a landslide less than three years ago.

“I’m feeling good, as long as we can get out that vote,” Newsom said after greeting volunteers in San Francisco hours before the polls closed.

A recall election has a less predictable dynamic than a regular election, he said.

“They designed this to catch us while we’re sleeping,” Newsom said. “But I think you’ve seen in the early voting Democrats have been coming out strong, and I’m just humbled by that.”

Newsom got a final push late Monday from President Joe Biden, who warned that the contest could shape the country’s direction on the pandemic, reproductive rights and the battle to slow climate change. The results also are likely to influence the 2022 midterm elections, when control of Congress will be in play again. The party that controls the White House historically loses seats in midterms.

Biden said the issues that defined the 2020 presidential race have been resurrected in California, with potentially disastrous results if Newsom is removed. Speaking to hundreds of cheering supporters during a twilight rally in the coastal city of Long Beach, south of Los Angeles, Biden referred to Elder as a “clone” of Trump.

Elder staged his capstone rally in nearby Orange County, where he urged supporters to reach out to friends and neighbors to vote. The GOP will need a heroic Election Day turnout to catch Democrats, who have been turning in mail ballots in larger numbers. Nearly 8.6 million of California’s 22 million voters already have cast mail-in ballots.

“Make sure you have your friends vote, vote, vote, and try and get 10 more friends to vote. And hit every call, make every call, knock on every door. We’re going to win this thing if we turn out the vote,” Elder said from a hotel ballroom in Costa Mesa.

U.S. House Minority Leader Kevin McCarthy, a California Republican, called the election an opportunity to change course in a state where Democrats hold a nearly 2-to-1 advantage among registered voters. He cited homelessness, rising crime and the wildfire-driven closure of national parks, which he said was due to “forest mismanagement.”

“And you want to reward that?” McCarthy said Tuesday on Fox News Channel’s “Fox and Friends.

This recall was fueled largely by anger over Newsom’s actions during the pandemic, which included imposing the nation’s first statewide shutdown order. Critics said he was heavy handed, shuttering businesses and keeping children out of classrooms for longer than necessary. Newsom said his actions saved lives.

“I am angry. It should be a freedom of choice. What is this? A dictatorship?” asked Janet Webb, a 69-year-old Lafayette resident who voted for Elder.

She said squabbles over Newsom’s handling of the pandemic have split her family and friends and may prompt her to move out of state.

“I can’t live here like this if they’re going to force everyone to get a vaccine,” Webb said.

California voters have just two questions on Tuesday’s ballot: Should Newsom stay in office? And if not, who should replace him? There are 46 replacement candidates to choose from. If voters keep Newsom, the results on the second question are irrelevant.

“We’re in the middle of a pandemic. Why would we recall the governor who has been really trying to curb the spread of the virus?” the San Diego social worker said.

Mendoza believes Newsom brought the recall upon himself by attending a birthday party at an upscale Napa Valley restaurant last fall in violation of his own administration’s coronavirus rules. But she thinks the effort to unseat him remains a backlash by a small minority of Republicans in a firmly Democratic state.

“We don’t want Elder in office,” she said. “This is ridiculous. We just got Trump out. We don’t want a Trump puppet.”

How California votes could determine how aggressively Democrats campaign on COVID-19 restrictions that many Republicans have decried as unnecessary and overly burdensome.

Newsom’s ouster would be a stunning rebuke in California, where the Democratic Party controls every statewide office and dominates the Legislature and the congressional delegation.

His advisers expressed increasing confidence that the governor would survive the effort to drive him out more than a year before the end of his first term. The campaign had 25,000 volunteers on the streets over the weekend and has sent 31 million text messages to voters.

Republicans have criticized him relentlessly for high taxes and housing prices that are out of reach for many in the working class.

In recent days, Elder suggested the results of the recall election could be skewed by unspecified “shenanigans,” echoing Trump’s baseless claims of voting fraud in his 2020 race with Biden.

There has been no confirmed evidence of widespread fraud. Elder’s campaign website has linked to a “Stop CA Fraud” site where people can sign a petition demanding a special legislative session to investigate the “twisted results,” well before any results were announced.

Newsom said he would accept the election results and urged Elder and others to do the same. “As an American, I’m ashamed. I’m disgusted by it. Stop. Grow up. These people literally are vandalizing our democracy and trust in our institutions,” he said.

Asked to provide evidence of any suspicious voting activity, Elder spokeswoman Ying Ma said the campaign wants “every proper vote to be counted” and “whatever shenanigans there are will not stand in the way of him becoming the next governor.”