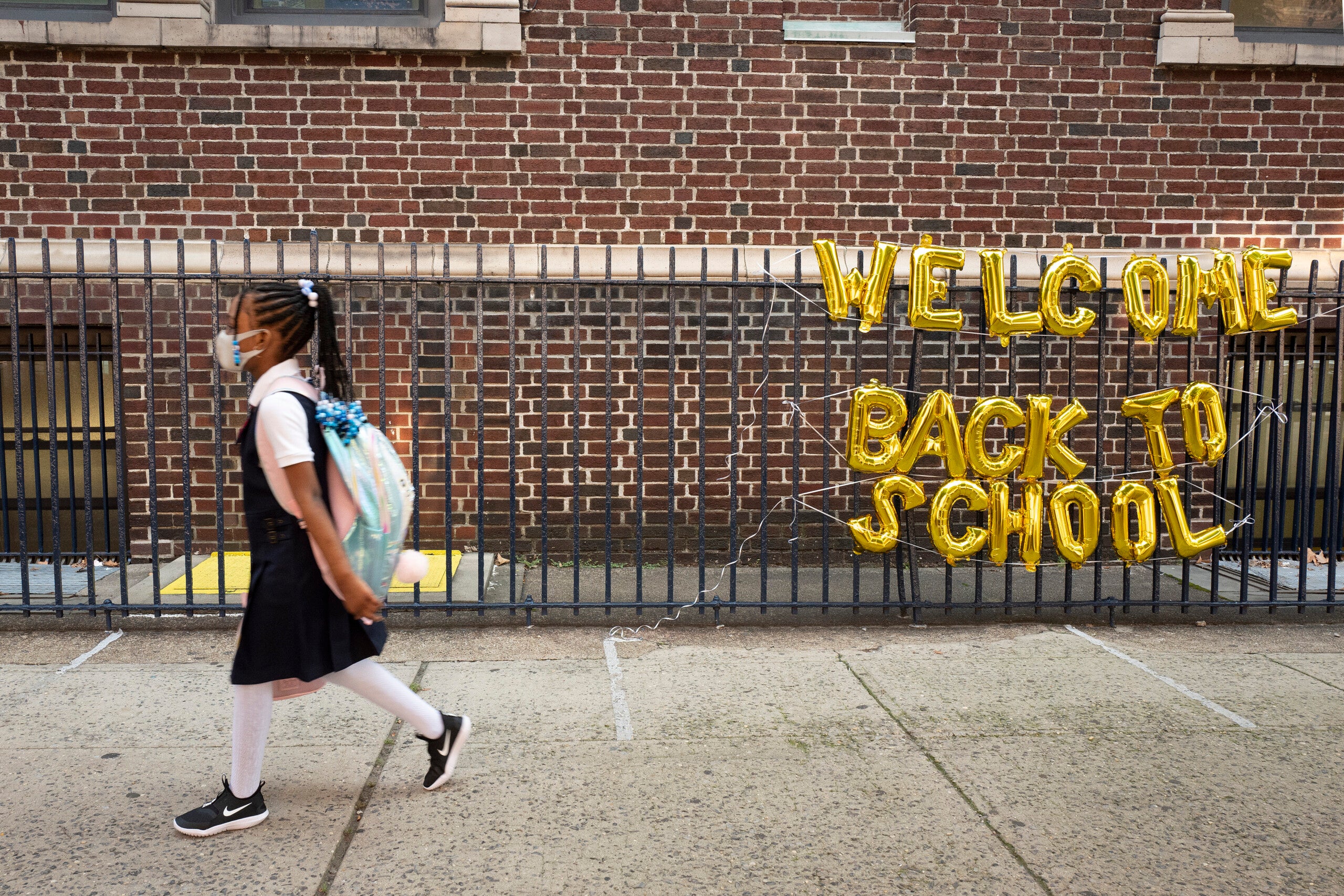 FILE - In this Sept. 13, 2021, file photo, a girl passes a "Welcome Back to School" sign as she arrives for the first day of class at Brooklyn's PS 245 elementary school in New York. COVID-19 deaths and cases in the U.S. have climbed back to where they were over the winter, fueled by children now back in their classrooms, loose mask restrictions and low vaccination levels. (AP Photo/Mark Lennihan, File)
by: MICHAEL HILL Associated Press
Posted: Sep 25, 2021 / 02:10 PM EST / Updated: Sep 25, 2021 / 02:10 PM EST

(AP) — New York City schools have been temporarily blocked from enforcing a vaccine mandate for its teachers and other workers by a federal appeals judge just days before it was to take effect.

The worker mandate for the the nation’s largest school system was set to go into effect Monday. But late Friday, a judge for the 2nd U.S. Circuit Court of Appeals granted a temporary injunction and referred the case to a three-judge panel an an expedited basis.

“We’re confident our vaccine mandate will continue to be upheld once all the facts have been presented, because that is the level of protection our students and staff deserve,” Filson said in an email.

The New York Post reported that the department sent an email to principals Saturday morning saying they “should continue to prepare for the possibility that the vaccine mandate will go into effect later in the week.”

Mayor Bill de Blasio announced in August that about 148,000 school employees would have to get at least a first dose of the COVID-19 vaccination by Sept. 27. The policy covers teachers, along with other staffers, such as custodians and cafeteria workers.

It’s the first no-test-option vaccination mandate for a broad group of city workers in the nation’s most populous city. And it mirrors a similar statewide mandate for hospital and nursing home workers set to go into effect Monday.

As of Friday, 82% of department employees have been vaccinated, including 88% of teachers.

Even though most school workers have been vaccinated, unions representing New York City principals and teachers warned that could still leave the 1 million-student school system short of as many as 10,000 teachers, along with other staffers.

De Blasio has resisted calls to delay the mandate, insisting the city was ready.

“We’ve been planning all along. We have a lot of substitutes ready,” the Democrat said in a radio interview on Friday. “A lot is going to happen between now and Monday but beyond that, we are ready, even to the tune of, if we need thousands, we have thousands.”