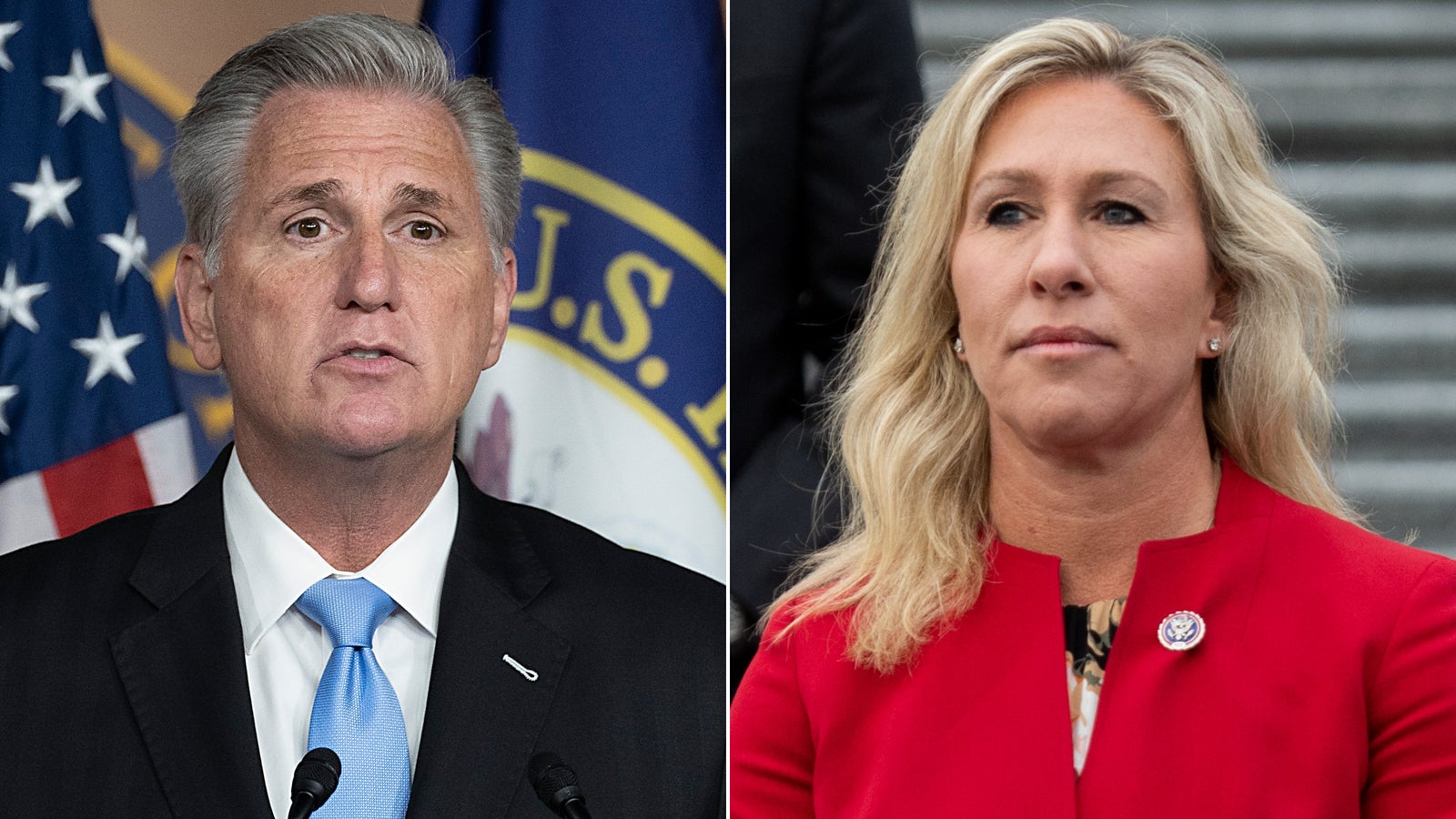 (CNN) — House Republican leaders have condemned incendiary remarks from GOP Rep. Marjorie Taylor Greene five days after she first publicly compared Capitol Hill mask rules to the Holocaust, amid a wave of criticism from Republican and conservative critics as well as Jewish groups aimed at the Georgia congresswoman and the party leaders’ silence.

“Marjorie is wrong, and her intentional decision to compare the horrors of the Holocaust with wearing masks is appalling,” House Republican Leader Kevin McCarthy said in a statement five days after Greene’s original comments and after she made similar comparisons Tuesday. “Let me be clear: the House Republican Conference condemns this language.”

The No. 2 House Republican, Rep. Steve Scalise of Louisiana, also responded to Greene’s comments for the first time on Tuesday.

“Rep. Scalise does not agree with these comments and condemns these comparisons to the Holocaust,” Scalise spokesperson Lauren Fine said in a written statement that also attacked Democrats.

Rep. Elise Stefanik of New York, the newly elected No. 3 House Republican, also responded to the controversy in a tweet that didn’t include Greene’s name.

“Equating mask wearing and vaccines to the Holocaust belittles the most significant human atrocities ever committed. We must all work together to educate our fellow Americans on the unthinkable horrors of the Holocaust. #NeverAgain,” Stefanik wrote Tuesday morning, following McCarthy and Scalise’s remarks.

In comments first reported widely on Friday, Greene compared House Speaker Nancy Pelosi’s decision to continue to require members of the House to wear masks on the chamber floor to steps the Nazis took to control the Jewish population during the Holocaust.

Greene, in a conversation with the Christian Broadcasting Network’s David Brody on the Real America’s Voice TV show “The Water Cooler,” attacked Pelosi and accused her of being a hypocrite for asking GOP members to prove they have all been vaccinated before allowing members to be in the House chamber without a mask.

“You know, we can look back at a time in history where people were told to wear a gold star, and they were definitely treated like second class citizens, so much so that they were put in trains and taken to gas chambers in Nazi Germany,” Greene said at the time. “And this is exactly the type of abuse that Nancy Pelosi is talking about.”

On Tuesday, Greene continued to ramp up her rhetoric, tweeting once again her thoughts about vaccine requirements and the Holocaust.

Senate Minority Leader Mitch McConnell spoke out against Greene on Tuesday morning when asked about her latest comments on the Holocaust.

“Once again an outrageous and reprehensible comment,” McConnell, a Kentucky Republican, said.

“A new comment by @mtgreenee sticking with the Nazi comparison. I’m sure Republican leadership hasn’t seen it yet, so wanted to alert @GOPLeader, @SteveScaliseGOP, and @EliseStefanik so they can hop into action,” tweeted Bill Kristol, director of Defending Democracy Together, a conservative advocacy group.

Jeff Miller, a board member of the Republican Jewish Coalition and member of US Holocaust Memorial Museum Council, also highlighted and criticized Greene’s latest tweet Tuesday.

“WTF is wrong with you?” asked Miller, the former vice chairman of the Trump inaugural committee and a one-time ally to the former President. “I think you need to pay a visit to the US Holocaust Museum.I’d be happy to arrange.Then maybe going forward you wouldn’t make anymore disgusting, ignorant and offensive tweets.If I’m wrong and you’re not ignorant about Holocaust..then you are disgusting.”

Miller has been a major backer of former President Donald Trump’s and helped bundle millions of dollars for the reelection campaign. He is also close with McCarthy and has previously served as a political adviser to him.

It’s unclear what disciplinary steps might be taken against Greene either by her conference or by the chamber as a whole, which is controlled by Democrats. Greene, who was first elected to her House seat last fall, was stripped of her committee assignments earlier this year following CNN and other outlets unearthing incendiary and violent past statements she had made. At the time, House Democrats took the unprecedented step of voting to kick her off her committees after Republican leaders declined to take that action on their own. Instead, leadership stood by her and assailed Democrats for voting her out.

But Greene’s comments in recent days have become a major liability for GOP leaders who are trying to unite their conference in the wake of ousting Rep. Liz Cheney, the Wyoming Republican and former House Republican conference chairwoman, from her leadership post.

Cheney was among a handful of House Republicans who publicly condemned Greene’s remarks days before McCarthy or Scalise made their comments.

In response Greene’s initial comments, Cheney tweeted over the weekend, “This is evil lunacy.”