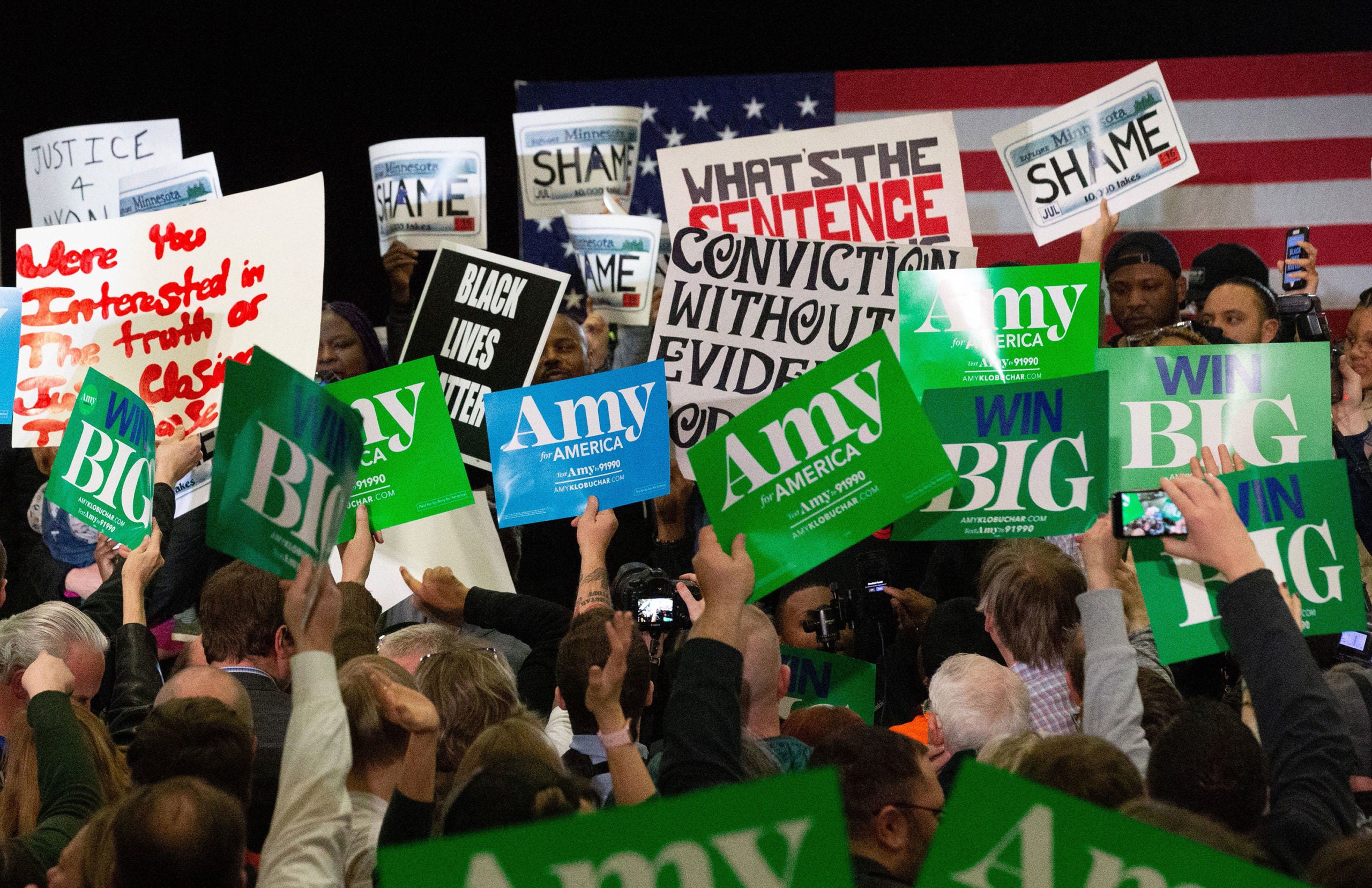 Supporters face off with protestors who took over the stage forcing Democratic presidential hopeful Minnesota Senator Amy Klobuchar to cancel her rally before it even started on March 1, 2020 in St. Louis Park, west of Minneapolis, Minnesota. - Hundreds of Klobuchar supporters witnessed a group of Black Lives Matter protesters demanding her to drop out of the race after her misshandling of Myon Burrell's case in 2002 when she was County Attorney. (Photo by Kerem Yucel / AFP) (Photo by KEREM YUCEL/AFP via Getty Images)
by: Jasmine Wright, CNN
Posted: Mar 2, 2020 / 08:19 AM EST / Updated: Mar 2, 2020 / 08:19 AM EST

(CNN) — Sen. Amy Klobuchar‘s campaign canceled a Sunday evening campaign event after dozens of protesters took the stage and would not leave inside a high school gym in St. Louis Park, Minnesota.

Campaign manager Justin Buoen said he was “very disappointed,” adding that Klobuchar was ready to meet with the protesters, who agreed to sit down with her and then changed their minds.

“We had a negotiation and had an agreement with the organizers of the protest to meet with the senator on site. She was in the room ready to meet with them and then they changed the terms and decided that they didn’t want to meet with her,” he said in a conference room. “Really wish that we would have been able to one, do the meeting, and listen to the protesters, but also have the event.”

Family members of Myon Burrell, a Minnesota teenager who was sentenced to life in prison under then-County Attorney Klobuchar for murder, along with protesters affiliated with the Racial Justice Network, Minneapolis NAACP and others took the stage in Burrell’s honor chanting “Free Myon” and “Black Lives Matter.”

CNN has reached out to Nekima Levy Armstrong, a civil rights attorney who was one of the organizers of the protest, for comment.

A recently published Associated Press investigation into Burrell’s case labeled his conviction “flawed,” causing some of the same groups present to call for Klobuchar to suspend her campaign.

The image on Sunday was striking. At one point, Klobuchar supporters holding “Amy for America” signs stood on chairs directly across from stage shouting “Amy, Amy,” to shout down the protesters while they responded with “Black Lives Matter” chants.

After a brief pause, a majority of crowd joined in the effort to drown out protesters that worked for a brief amount of time, but eventually, the cancellation was announced.

“Ladies and gentleman, thank you very much for coming tonight and for your patience,” the announcer said. “We’re sorry to say that tonight’s event has been canceled. We are sorry for any inconvenience. Please remember to vote on Tuesday.”

The crowd began filing out, leading protesters to start chanting, “Who shut it down? We shut it down!”

When asked by CNN if Sunday night’s protest was emblematic of Klobuchar’s inability to garner support from racially diverse voters, Buoen said no.

“I don’t know that one event is emblematic of anything and again I’m just disappointed and hopeful that we’re able to do a meeting in the future,” he said.