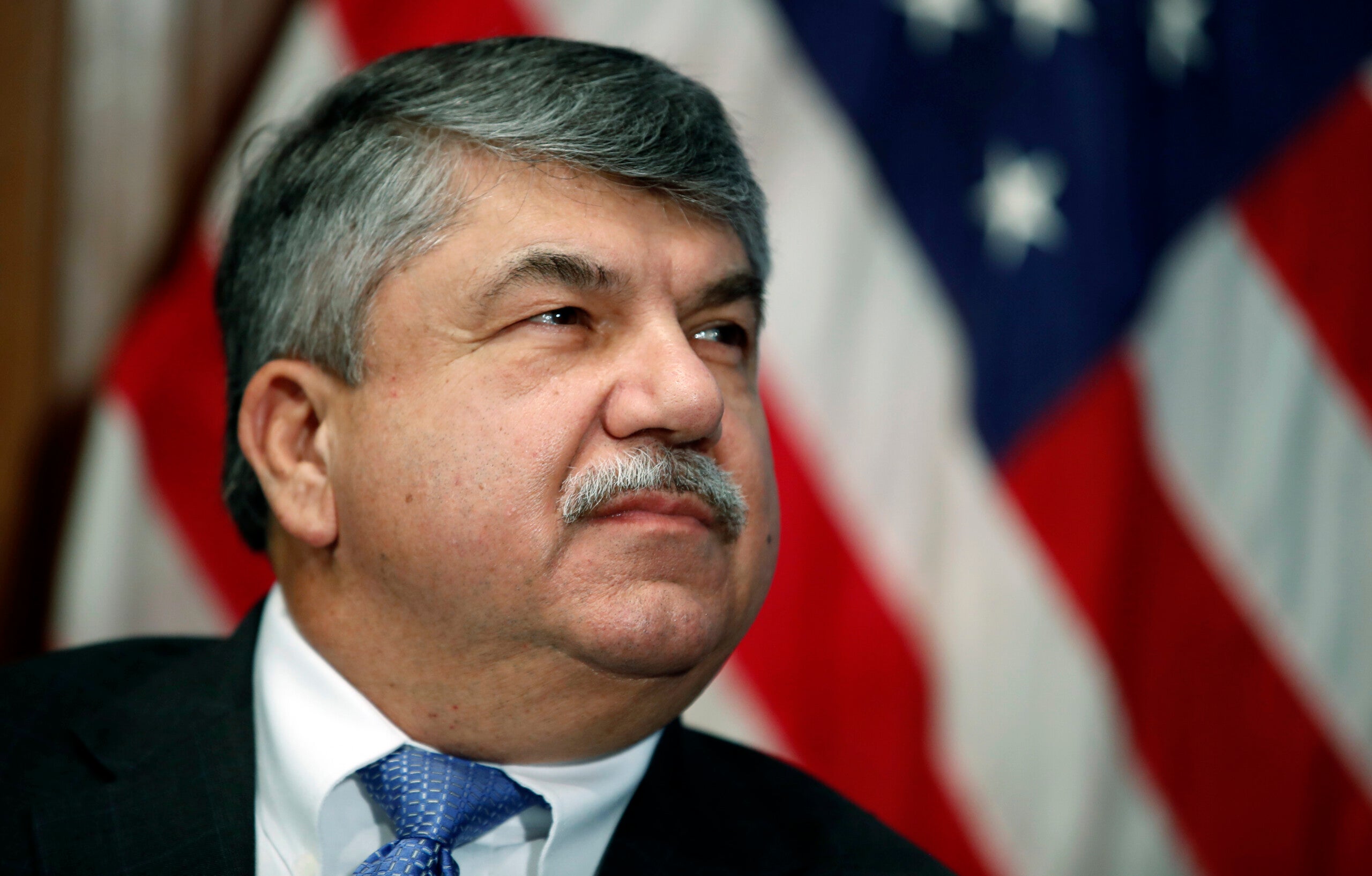 WASHINGTON (AP) — Richard Trumka, the powerful president of the AFL-CIO who rose from the coal mines of Pennsylvania to preside over one of the largest labor organizations in the world, died Thursday. He was 72.

The federation confirmed Trumka’s death in a statement. He had been AFL-CIO president since 2009, after serving as the organization’s secretary-treasurer for 14 years. From his perch, he oversaw a federation with more than 12.5 million members and ushered in a more aggressive style of leadership.

“The labor movement, the AFL-CIO and the nation lost a legend today,” the AFL-CIO said. “Rich Trumka devoted his life to working people, from his early days as president of the United Mine Workers of America to his unparalleled leadership as the voice of America’s labor movement.”

Further details of Trumka’s death, including the cause and where he died, were not immediately available.

Senate Majority Leader Chuck Schumer announced Trumka’s death from the Senate floor. “The working people of America have lost a fierce warrior at a time when we needed him most,” he said.

President Joe Biden called Trumka “a close friend” who was “more than the head of AFL-CIO.” He apologized for showing up late to a meeting with Asian American, Native Hawaiian and Pacific Islander civil rights leaders, saying he had just learned Trumka had died.

A burly man with thick eyebrows and a bushy mustache, Trumka was the son and grandson of coal miners. He grew up in the small southeast Pennsylvania town of Nemacolin, where he worked as a coal miner while attending Penn State University.

He was elected in 1982 at age 33 as the youngest president of the United Mine Workers of America, pledging that the then-troubled union “shall rise again.”

There, he led a successful strike against the Pittston Coal Company, which tried to avoid paying into an industrywide health and pension fund, the union’s website said.

At age 43, Trumka led a nationwide strike against Peabody Coal in 1993. During the walk-off, he stirred controversy.

Asked about the possibility the company would hire permanent replacement workers, Trumka told The Associated Press, “I’m saying if you strike a match and you put your finger on it, you’re likely to get burned.” Trumka insisted he wasn’t threatening violence against the replacements. “Do I want it to happen? Absolutely not. Do I think it can happen? Yes, I think it can happen,” he told the AP.

As AFL-CIO president, he vowed to revive unions’ sagging membership rolls and pledged to make the labor movement appeal to a new generation of workers who perceive unions as “only a grainy, faded picture from another time.”

“We need a unionism that makes sense to the next generation of young women and men who either don’t have the money to go to college or are almost penniless by the time they come out,” Trumka told hundreds of cheering delegates in a speech at the union’s annual convention in 2009.

That year, he was also a leading proponent during the 2009 health care debate for including a public, government-run insurance option, and threatened Democrats who opposed one.

“We need to be a labor movement that stands by our friends, punishes its enemies and challenges those who, well, can’t seem to decide which side they’re on,” he said in August, 2009.

During the 2011 debate over public employee union rights in GOP-controlled statehouses Trumka said the angry protests it sparked were overdue.

Trumka said he hoped then-Wisconsin Gov. Scott Walker’s bill to strip public employee unions of their bargaining power, which drew thousands of protesters to the Capitol in Madison, could renew support for unions after decades of decline.

Whether he meant to or not, Trumka said, Walker started a national debate about collective bargaining “that this country sorely needed to have.”

Eulogies poured in from Trumka’s Democratic allies in Washington.

“Richard Trumka dedicated his life to the labor movement and the right to organize,” House Speaker Nancy Pelosi said in a statement. “Richard’s leadership transcended a single movement, as he fought with principle and persistence to defend the dignity of every person.”

Democratic Sen. Joe Manchin of West Virginia said he was “heartbroken” to learn of the death of his friend.

“Rich’s story is the American story — he was the son and grandson of Italian and Polish immigrants and began his career mining coal. He never forgot where he came from. He dedicated the rest of his career to fighting for America’s working men and women,” Manchin said in a statement.

“Today, the labor movement lost a titan and a fierce advocate. AFL-CIO President Richard Trumka was driven by his lifelong commitment to working people. He knew there was nothing more powerful than workers standing together for a better life. The Indiana AFL-CIO is mourning the loss of our leader, but standing on his shoulders, we’ll keep fighting every day to ensure that all workers have a good job and the power to determine their wages and working conditions. We can honor him today by continuing to fight tooth and nail to pass the PRO Act.

“On a personal note, I lost a friend today in President Trumka. Over the years, we’ve shared stories of our grandchildren, smoked a few cigars, and imagined a world where working people don’t have to struggle for economic justice. May his memory be an inspiration.”