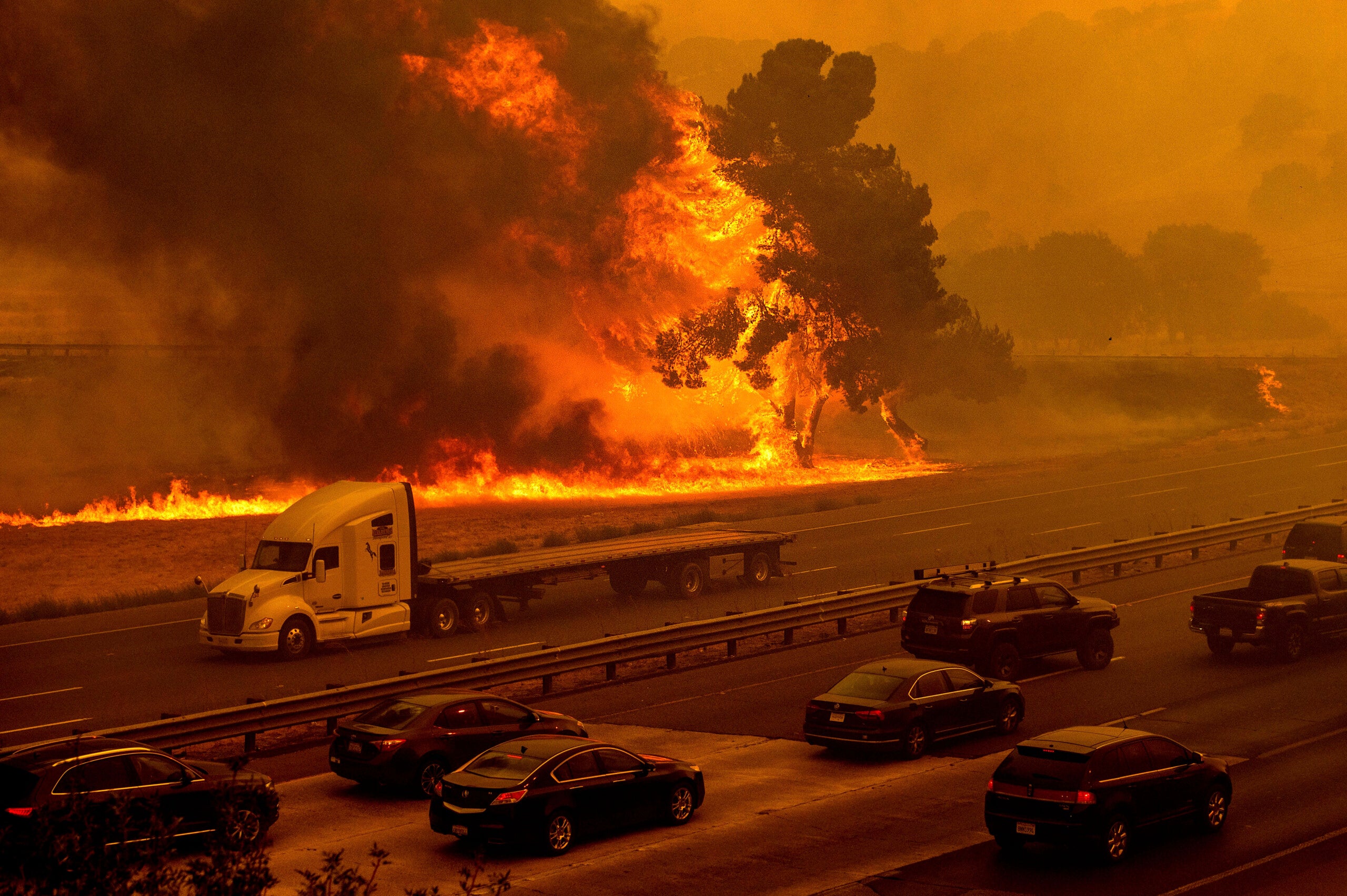 The fires, many caused by lightning and sometimes pushed by strong winds, had burned hundreds of thousands of acres as they chewed through brushland, rural areas, canyon country and dense forest surrounding San Francisco. Fires also burned in the Sierra Nevada and Southern California wild lands.

With so many burning at once, firefighters say they’re unable to tap resources such as extra personnel and equipment. In Marin County, just north of San Francisco where a small fire is burning near the Pacific Ocean, county fire chief Jason Weber said they are waiting for assistance from Montana to arrive this weekend.

He said that in his 25 years in fire service, “we’ve never seen this level of draw-down” with heavy competition within the state and in the western U.S. for equipment and people.

Kevin Stover, 42, was struggling with indecision early Thursday morning when a mandatory evacuation order was issued for the rugged and small town of Felton outside the beach city of Santa Cruz.

“I don’t want to leave,” said Stover, a camera operator and rigger now driving for Door Dash and Lyft because of the pandemic. His car, loaded with important papers, his father’s urn and some arrowheads that meant a lot to him, had a flat tire. He had put a plug in the tire and patched it with gaff tape.

“I’m trying to figure out if I should cut these original oil paintings out of the frame to salvage them,” he said.

In addition to about two dozen major blazes, small fires kept erupting, though most were quickly stopped.

In central California, a pilot on a water dropping mission in western Fresno County died Wednesday morning when his helicopter crashed.

The pilot was working with Fillmore-based Guardian Helicopters, which had a contract with the state fire agency to provide emergency services, said Zoe Keliher, an investigator with the National Transportation Safety Board.

A Pacific Gas & Electric utility worker died at a fire in the Vacaville area between San Francisco and Sacramento but circumstances were not clear. The worker was found in a vehicle and CPR was performed but he was pronounced dead at a hospital, said a California Department of Forestry and Fire Protection statement.

He had been clearing poles and lines to make the area safe for first responders, Cal Fire said.

Two fires in Sonoma County prompted evacuation orders for 8,000 residents near the Russian River Wednesday and residents of Healdsburg, which has a population of about 12,000, were warned late Wednesday night to be ready to flee.

Ash and smoke filled the air in San Francisco from at least seven fires — known as the LNU Lightning Complex — that destroyed more than 100 buildings, including some homes, and threatened 25,000 others in five counties.

Residents in nearby Vacaville, a city of about 100,000, were roused before dawn Wednesday by orders to flee.

California State Parks announced full or partial closures of more than two dozen parks, including Big Basin Redwoods in the Santa Cruz Mountains, where the park headquarters and other facilities were damaged. The park featuring magnificent towering stands of ancient coast redwoods dates to 1902 and is the state’s oldest.

Some firefighters were working 72-hour shifts instead of the usual 24 hours.

“We’re in the unfortunate position where firefighters are going to be spending several days out on the fire line,” Cox said. “It’s grueling, it’s exhausting.”

In Southern California, firefighters worked in high heat to increase containment of fires in mountains north and east of Los Angeles. A huge fire also burned in the remote Mojave National Preserve.