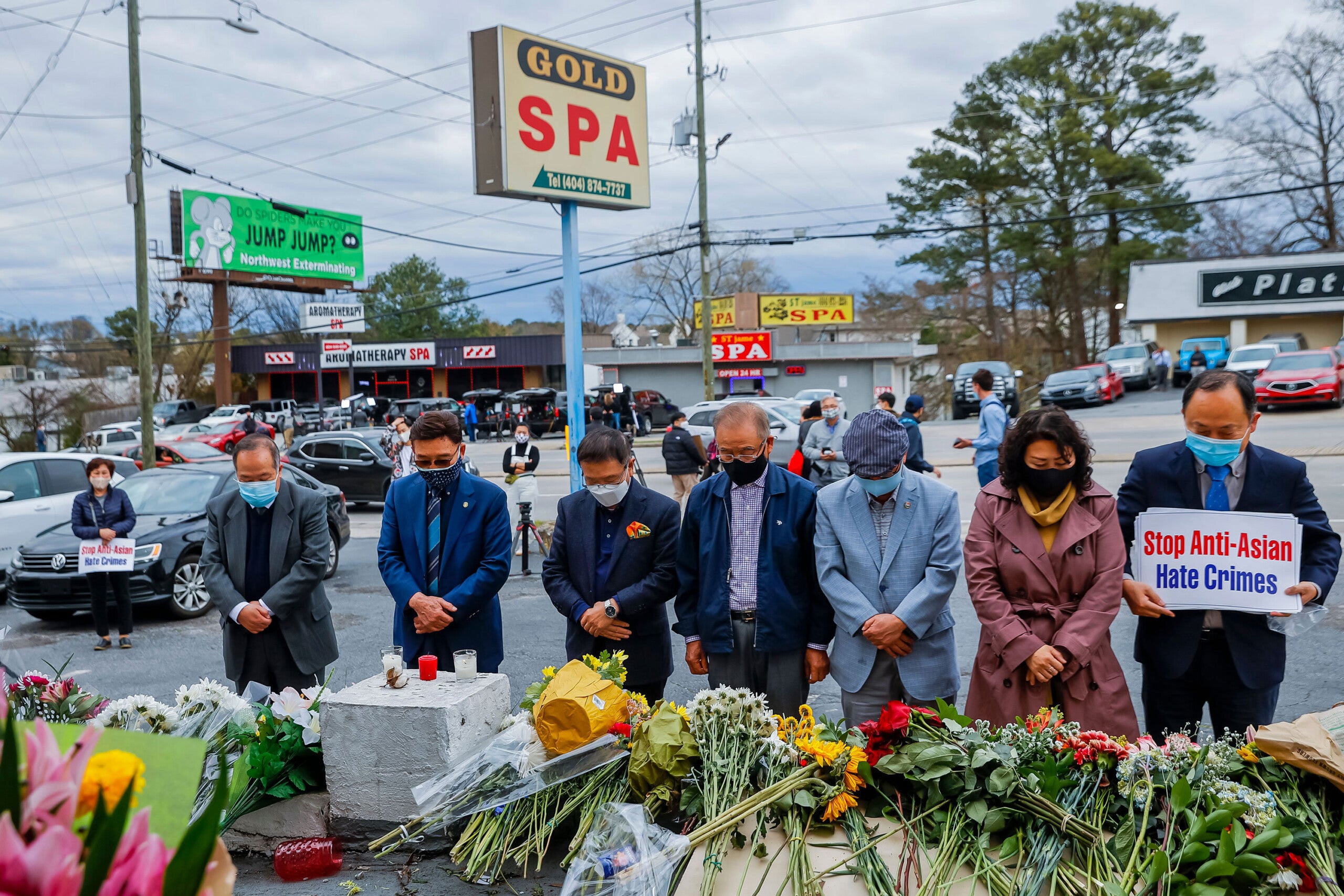 (CNN) — Timothy Phan drove eight hours from Florida to attend a Saturday rally in Atlanta, aimed at grieving those killed at three Georgia spas and opposing hate against Asian Americans.

Phan didn’t know the eight people slain, six of whom were women of Asian descent. But with reports of attacks against Asian Americans against the rise, he felt like it hit close to home.

His family works in the nail salon industry. He’d heard officials say the suspect in Tuesday’s shootings might have been headed to Florida to do more harm when he was arrested.

“The people, the women who perished, I see my family in them,” he told CNN at Saturday’s rally, which scores of people attended at Liberty Plaza next to the Georgia Capitol in downtown Atlanta.

Atlanta’s rally was one of several scheduled around the country Saturday to honor the victims and decry violence against Asian Americans. Events were planned in New York, Houston, Columbus and elsewhere.

Authorities say they are still investigating the motive in the killings, and that the suspect claimed to investigators that the shooting wasn’t racially motivated.

Eight people were fatally shot Tuesday — four at a spa in Georgia’s Cherokee County, and four more about an hour later at two spas some 30 miles away in Atlanta.

But community leaders have said Tuesday’s violence has added to the fears that Asian Americans already were feeling. Anti-Asian hate crimes have more than doubled during the coronavirus pandemic, according to the Center for the Study of Hate and Extremism at California State University, San Bernardino.

The crimes have surged along with racist rhetoric during the pandemic. Many Asian Americans have been subjected to vitriol about the “China virus” or the “kung flu” — even those who have never been to Asia.

Outside one of the Atlanta spas, Xinrui Li walked up to leave flowers on Saturday. The Atlanta resident of Asian descent told CNN that she, too, was shaken by Tuesday’s shootings.

“Right now I really feel very insecure, because even before this, when I was on the street sometimes people will ask me questions like, ‘Why are you here?'” she said.” Nowadays after these things happen, I really feel scared.”

Similar sentiments were expressed Friday in New York City, where people gathered at Foley Square for a candlelight vigil for the victims.

“It took a really long time for us to even be acknowledged about what was happening, and it took the deaths of eight people — six of the women who look like me — for people to start realizing what we’ve been saying (about rising violence) since last year,” Jo-Ann Yoo, executive director of the Asian American Federation, told Spectrum News NY1 at the rally.

Saturday’s rally in Atlanta was attended by Georgia’s two new US senators, Jon Ossoff and Raphael Warnock, who criticized a Cherokee County official’s comments this week that the suspect had a “really bad day.”

“I’m not interested in whether or not he had a bad day,” Warnock said, adding, “We got to stop pretending like hate laws and laws regarding terrorism only apply to Black people and brown people and people of color and Muslims.”

“We stand resiliently in defiance of hatred and murder,” Ossoff said. “This is Georgia. This is love. This is compassion. This is the best of us and this is what defines the people of our state and our nation, not those who kill or scapegoat or engage in racism or hate speech or hate crimes.”

The level of planning seen in the shootings would show the suspect was motivated by more than just a “bad day,” retired FBI supervisory Special Agent Jim Clemente told CNN’s Erin Burnett on Friday.

“His actions show that he targeted a particular type of person on this particular day, and not only did he do it at one location, but he went to a second and a third location,” Clemente said.

President Joe Biden and Vice President Kamala Harris visited Atlanta on Friday and condemned the shootings and the rising number of hate crimes against Asian Americans.

Some public officials have said they want prosecutors to consider hate crime charges, whether on the basis of race or sex, both of which are covered in Georgia’s hate crime law.

While in Atlanta, Biden and Harris did not explicitly state that they considered the shootings a hate crime. But they noted that whatever the shooter’s motivation, the killings come as hate crimes are rising against Asian Americans.

“The conversation we had today with the (Asian American and Pacific Islander) leaders, and that we’re hearing all across the country, is that hate and violence often hide in plain sight. It’s often met with silence,” Biden said. “That’s been true throughout our history, but that has to change because our silence is complicity.”

During Biden and Harris’s visit, community leaders talked with the President and vice president for more than an hour about their concerns about crimes against Asians and other issues, Georgia state Rep. Bee Nguyen told CNN’s “Erin Burnett OutFront.”

Long told police he believed he had a sex addiction and that he saw the spas as “a temptation … that he wanted to eliminate,” said Cherokee County sheriff’s Capt. Jay Baker on Wednesday. He claimed the attacks weren’t racially motivated, Baker said.

But Atlanta police have said it is still too early to know the suspect’s motive. And Cherokee County District Attorney Shannon Wallace said the investigation is ongoing and appropriate charges will be brought.

Long is being held without opportunity for bail in Cherokee County, where he faces four counts of murder with malice, one count of attempted murder, one count of aggravated assault and five counts of using a firearm while committing a felony.

He has been charged with four counts of murder in connection with the two spa shootings in Atlanta, according to Atlanta police.

Victims leave behind families: ‘She was one of my best friends’

The names of all eight people slain have been released.

About 30 miles away and within an hour of the first shooting, four Asian women were killed in Atlanta — three at the Gold Massage Spa, and one at the Aroma Therapy Spa across the street, authorities said.

One of the four victims in Atlanta was a South Korean citizen and permanent resident of the US, according to Kwangsuk Lee, South Korea’s deputy consulate general in Atlanta. The other three are believed to be Americans of Korean ethnicity, Lee told CNN on Friday.

Of the four Atlanta victims, three died of gunshot wounds to the head, and one died of a gunshot wound to the chest, the Fulton County medical examiner’s office said.

Grant was a “single mother who dedicated her whole life to providing for my brother and I,” her son Randy Park wrote on a GoFundMe page.

“She was one of my best friends and the strongest influence on who we are today,” Park wrote.

The GoFundMe page, set up for Grant’s two sons, hadraised more than $2.2 million from more than 57,000 donors as of Saturday morning. GoFundMe told CNN the page is verified; Park did not immediately respond to CNN’s request for comment.

The page says the donated money will pay for food, rent and other monthly bills. It says the brothers now only have each other in the US, with every other relative in South Korea.

“Losing her has put a new lens on my eyes on the amount of hate that exists in our world,” Park wrote.

Yaun’s husband, Mario Gonzalez, told the Mundo Hispanico newspaper that he and his wife were at the spa to get massages, and she was in a separate room when the shooting started.

“About an hour in … I heard the shots. I didn’t see anything, only I started to think it was in the room where my wife was,” he told the newspaper.

“(The shooter) took the most valuable thing I had in my life,” Gonzalez said. “He left me with only pain.”