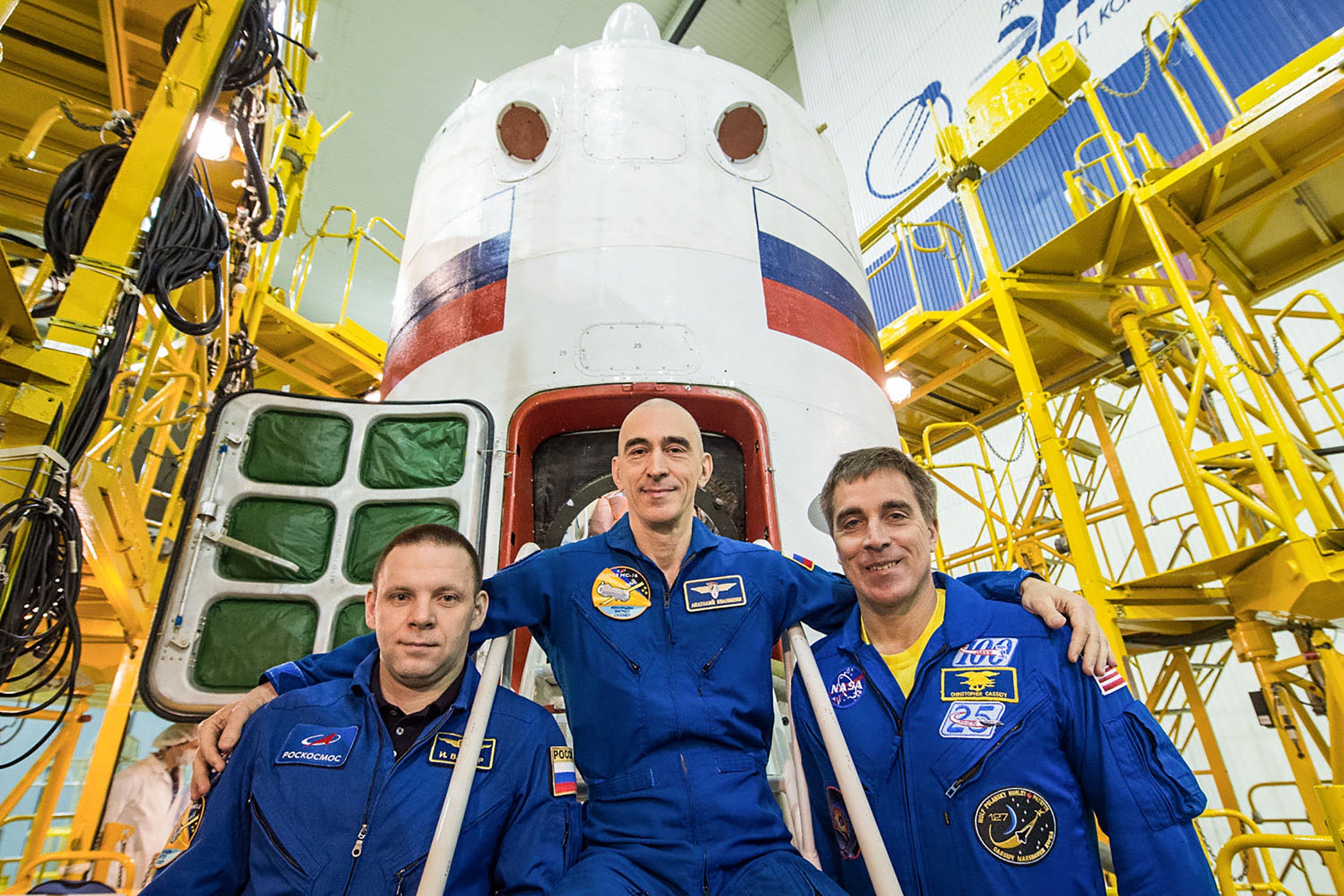 At the Baikonur Cosmodrome in Kazakhstan, Expedition 63 crewmembers Ivan Vagner (left) and Anatoly Ivanishin (center) of Roscosmos and Chris Cassidy (right) of NASA pose for pictures April 3 in front of their Soyuz spacecraft as part of their pre-launch activities. They will launch April 9 on the Soyuz MS-16 spacecraft from Baikonur on April 9 for a six-and-a-half month mission on the International Space Station. Courtesy/Roscosmos
by: Ashley Strickland, CNN
Posted: Oct 21, 2020 / 05:27 PM EST / Updated: Oct 21, 2020 / 05:27 PM EST

(CNN) — After launching to the International Space Station on April 9, NASA astronaut Chris Cassidy and Russian cosmonauts Anatoly Ivanishin and Ivan Vagner will return to Earth on Wednesday, Oct. 21.

The crew launched just weeks after the World Health Organization declared COVID-19 as a pandemic, making them the first crew to launch to space under such conditions.

Cassidy, the current Expedition 63 mission commander, handed over the command of the space station to newly arrived Russian cosmonaut Sergey Ryzhikov during a change of command ceremony on Tuesday.

The departing crew will bid farewell on Wednesday to NASA astronaut Kate Rubins and Russian cosmonauts Ryzhikov and Sergey Kud-Sverchkov, who just launched and arrived on the space station last week.

They closed the hatch to their Soyuz spacecraft on Wednesday at 4:24 p.m. ET. The crew was delayed in closing the hatch because of a camera issue that prevented NASA and Roscosmos, the Russian space agency, from seeing a live view of the hatch closure.

They will undock from the station at 7:32 p.m. ET and are expected to land at 10:55 p.m. ET southeast of the remote town of Dzhezkazgan on the steppe of Kazakhstan, according to NASA. The agency will provide live coverage of the crew’s departure and landing on its website.

Once the crew has landed on Earth, helicopters will take them to a recovery staging site in Karaganda, Kazakhstan. Cassidy will return to Houston aboard a NASA plane. Ivanishin and Vagner will take a Gagarin Cosmonaut Training Center aircraft flight to Star City, Russia.

Cassidy, Ivanishin and Vagner spent 196 days in space during their stay on the station. During that time, they completed 3,136 orbits around the Earth and traveled 83 million miles.

This was Cassidy’s third trip to the space station, and he has spent a total of 378 days in space. That places him with the fifth highest total among US astronauts.

It was Vagner’s first spaceflight and the third for Ivanishin, who has spent a total of 476 days in space.

The NASA astronaut and Russian cosmonauts worked on a variety of science experiments during their time on the station.

Cassidy participated in experiments that could benefit human health on Earth, researched water droplet formation and flow in space and even worked with some free-flying robotic astronaut assistants. The cube-shaped Astrobee robots could eventually be used to help astronauts with routine duties and tasks in the future.

During their stay on the space station, Cassidy, Vagner and Ivanishin welcomed NASA astronauts Robert Behnken and Douglas Hurley. Behnken and Hurley launched to the station from the US on NASA’s SpaceX Demo-2 mission.

It was both the first crewed spaceflight using a commercial spacecraft and the first crewed launch from the US to the space station since the end of the shuttle program in 2011, according to NASA.

Behnken and Cassidy, both veteran spacewalkers, conducted four spacewalks to replace aging batteries on the outside of the space station in June and July.

This brought the total of spacewalks to 10 for both Behnken and Cassidy, putting them in a tie with NASA astronauts Michael Lopez-Alegria and Peggy Whitson for the most spacewalks by Americans.

It’s a similar story now for NASA astronaut Rubins, who will be the only NASA astronaut on board the station after Cassidy’s departure until the arrival of the SpaceX Crew-1 mission carrying NASA astronauts Michael Hopkins, Victor Glover and Shannon Walker, and Soichi Noguchi of the Japan Aerospace Exploration Agency. That will bring the total crew number to seven.

Scheduled to launch in November, this crew will launch on the first long-duration commercial crew mission to the station and return to Earth in spring 2021, according to NASA.