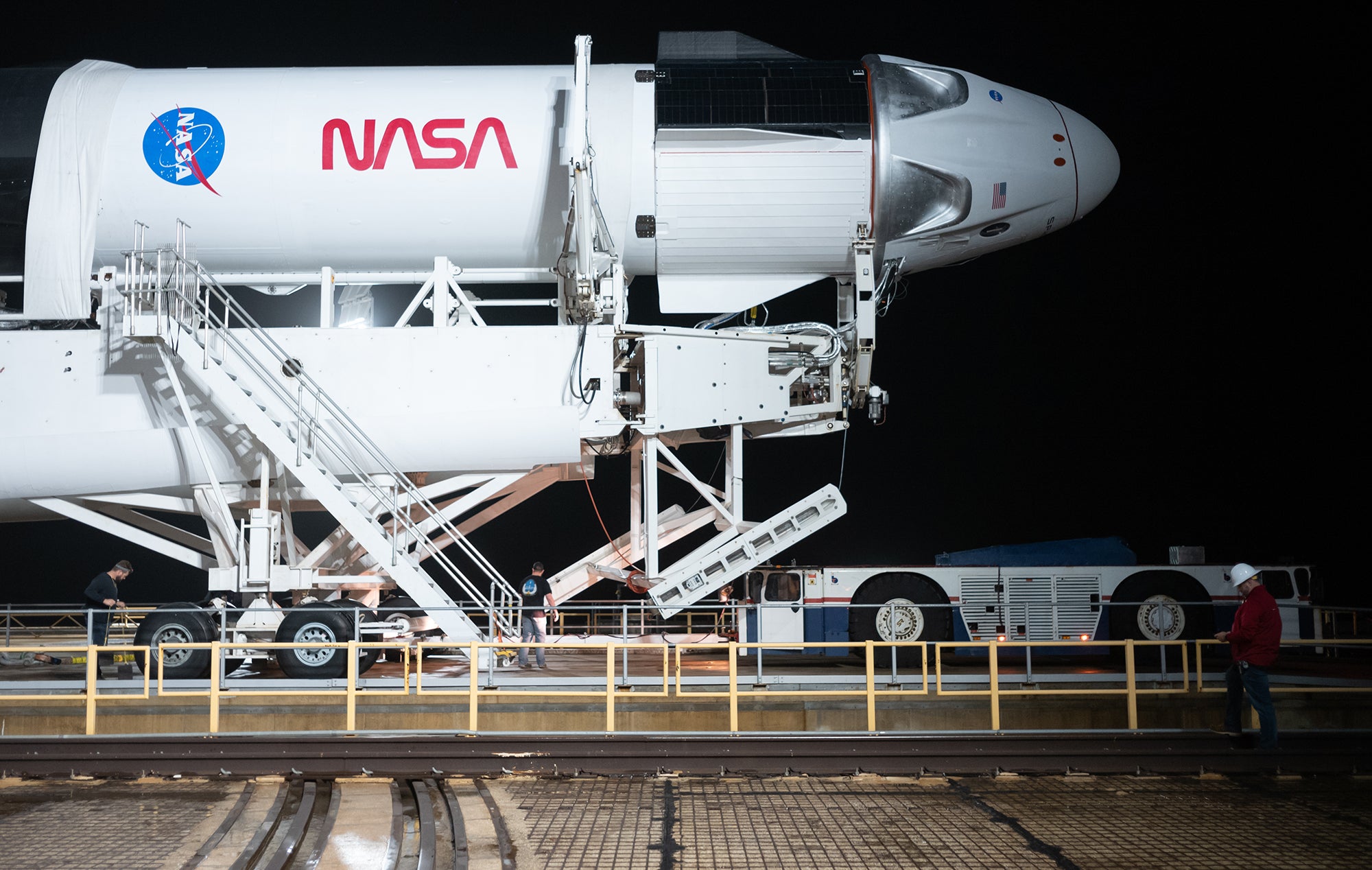 A SpaceX Falcon 9 rocket with the company's Crew Dragon spacecraft onboard is seen on the launch pad at Launch Complex 39A before being raised into a vertical position, Monday, Nov. 9, 2020, at NASA’s Kennedy Space Center in Florida. NASA’s SpaceX Crew-1 mission is the first operational mission of the SpaceX Crew Dragon spacecraft and Falcon 9 rocket to the International Space Station as part of the agency’s Commercial Crew Program. NASA astronauts Mike Hopkins, Victor Glover, and Shannon Walker, and astronaut Soichi Noguchi of the Japan Aerospace Exploration Agency (JAXA) are scheduled to launch at 7:49 p.m. EST on Saturday, Nov. 14, from Launch Complex 39A at the Kennedy Space Center. Photo Credit: (NASA/Joel Kowsky)
by: Jackie Wattles, CNN Business
Posted: Nov 13, 2020 / 06:08 PM EST / Updated: Nov 13, 2020 / 06:08 PM EST

(CNN) — Four astronauts are slated to ride into orbit aboard a SpaceX Crew Dragon capsule this weekend, kicking off what NASA hopes will be years of SpaceX conducting routine trips to keep the International Space Station fully staffed.

SpaceX made the call to delay the launch, according to a NASA spokesperson.

That news came shortly after SpaceX CEO Elon Musk also revealed on Twitter that he had experienced a fever and cough for a few days and had received both positive and negative test results for COVID-19. It’s not yet clear if he has the virus, but Bridenstine told reporters earlier Friday that, per NASA guidelines, Musk would need to self-isolate and SpaceX would need to do contract tracing to determine who may have been exposed if Musk does have the virus.

Three NASA astronauts — Michael Hopkins, Victor Glover, and Shannon Walker — will be joined by Soichi Noguchi, an astronaut with Japan’s space agency, JAXA, on the trip. Whether or not their Sunday launch time sticks will also depend on the weather. But the odds of favorable conditions on Sunday appear to be even lower than they were for Saturday, according to the latest forecast from the military’s 45th Space Wing, the United States Space Force team officially charged with deeming weather suitable for launch. The Space Wing’s latest forecast showed there was a 70% chance of good conditions on Saturday, but that drops to 60% on Sunday.

Another back-up launch day is slated for Wednesday, November 18.

This launch will follow the historic mission in May in which SpaceX’s Crew Dragon first flew astronauts. That marked the first time that astronauts went into orbit aboard a private spacecraft and the first time astronauts launched to space from US soil in nearly a decade. That trip, however, was still considered a “demonstration” mission and was flown bytwo veteran NASA astronauts and and former military test pilots. Everything went off without a hitch, but NASA did not officially certify Crew Dragon as a “human-rated” spacecraft, meaning it has officially been deemed safe to carry people into space, until final reviews finished this week.

This weekend’s mission, dubbed Crew-1, will really kick things off. The four astronauts aren’t all test pilots. They come from a variety of backgrounds — from academia to robotics engineering — and they’re prepared to become full-time residents once on board the space station, where they’ll conduct research as well as complete repairs and maintenance on the 20-year-old orbiting laboratory.

What is Crew Dragon?

It’s a gumdrop-shaped capsule that measures about 13 feet in diameter and is equipped with seven seats and touchscreen controls. SpaceX spent a decade developing and testing the spacecraft, which should not be confused with SpaceX’s experimental Mars rocket, Starship, or the company’s cargo-only Dragon spacecraft, which has been flying loads of supplies to and from the space station for years.

Crew Dragon and the astronauts will ride into orbit atop a SpaceX Falcon 9 rocket, and the astronauts will board the vehicle the day of launch using an aerial “crew access arm.” After the rocket fires the Crew Dragon into the upper atmosphere, the spacecraft will separate and fire up its own thrusters to begin maneuvering toward the space station.

The Crew Dragon capsule is fully autonomous, so the astronauts will mostly need to just monitor the systems and keep in touch with mission control unless something goes awry.

The Crew-1 astronauts have named their Crew Dragon spacecraft “Resilience” in recognition of the “global pandemic, economic hardships, and civil unrest” that has made 2020 a particularly challenging year, according to Hopkins.

“We feel like it is a connection with all of you, to everybody. We hope that it brings a smile to your face and we hope that it provides something positive to your life,” Hopkins said about the “Resilience” name during a recent press conference.

From now on, any missions that SpaceX flies on behalf of NASA will have “Crew” names: The Crew-2 mission, the next to take off after Crew-1, is slated to fly in spring 2021. On both missions, the astronauts will be headed for the space station to join an official ISS “Expedition,” the term used to identify crews of astronauts that serve as full-time staff members on the space station.

Though NASA oversaw the Crew Dragon’s development over the past decade and provided a large share of the funding, SpaceX will still own and operate the spacecraft. Technically, NASA is SpaceX’s customer for this mission, though the two organizations work hand-in-hand at launch and mission control. NASA has estimated that it’s paying SpaceX about $58 million per seat.

But SpaceX doesn’t have to sell seats only to NASA or other professionally trained astronauts. The space agency has said SpaceX will be able to sell seats aboard future missions to tourists, private researchers or anyone else who can pay for a seat.

Already, a Houston-based company called Axiom is planning a mission with four private citizens aboard a SpaceX Crew Dragon. That mission, dubbed AX-1, is expected to take off next year. Details about that mission have not yet been released.

Who is going to space?

Glover, 44, will pilot this mission.

Born in Pomona, California, Glover has a bachelor’s in engineering from Cal Poly, and he has three master’s degrees from various engineering programs.

Glover served in several military squadrons in the United States and Japan in the 2000s, and he completed test pilot training with the Air Force. When he was selected for the NASA astronaut corps in 2013, he was working for an unnamed US senator as a legislative advisor.

Though he’s spent about 3,000 hours piloting more than 40 types of aircraft, the SpaceX Crew-1 mission will mark the first time Glover has flown to space.

And his inclusion in this mission will have its own historic significance. Though more than a dozen Black Americans have traveled to space since Guion Bluford became the first to do so in 1983, Glover will be the first to become a full-time crew member on the ISS.

Walker, 55, will be one of two mission specialists on Crew-1, putting her in charge of monitoring the Crew Dragon’s on-board systems during flight and keeping other crew members on schedule.

She holds bachelor’s and master’s degrees in physics, as well as a doctorate in physics, all from Rice University. She joined Rockwell Space Operations in the late 1980s, where she worked closely with NASA and supported seven Space Shuttle missions from the mission control center in Houston. She later joined NASA’s ISS program, working on designs for various robotic components, before spending a year with Roscosmos,the Russian space agency, in Moscow where she helped coordinate with various international partners. She was back working at NASA’s Houston facilities in 2004 when she was selected for astronaut training.

Walker has logged one previous mission in space: In 2010, she served as a pilot on board a Russian Soyuz mission to the ISS, where she spent 161 days before returning to Earth.

Hopkins, 51, will serve as the commander of the Crew-1 mission, which will give him pretty much the same duties that captains have on seafaring ships.

Born in Missouri, Hopkins has master’s and bachelor’s degrees in aerospace engineering from the University of Illinois (where he was also captain of the football team) and Stanford University, respectively. He test piloted aircraft at Edwards Air Force Base in California for a few years, then studied political science in Italy before going to work as an engineer at the Pentagon. He joined NASA’s astronaut corps in 2009.

Like Walker, Hopkins has made one prior trip to space. In 2013, he flew aboard a Russian Soyuz spacecraft and spent nearly six months aboard the ISS, logging 166 days in space.

Noguchi, 55, will be the first astronaut from Japan’s JAXA space agency, a longtime NASA ally, to ride aboard a SpaceX Crew Dragon. He’ll serve alongside Walker as a mission specialist during the Crew-1 flight.

He grew up in Chigasaki, a small city near Yokohama, and he watched the first Space Shuttle missions on TV as a teenager. Noguchi went on to study aeronautical engineering and earned bachelor’s, master’s and doctorate degrees from the University of Tokyo. He was working on spacecraft component development in Japan before he was selected by the Japanese government for astronaut training in 1996. Noguchi spent two years training with NASA and Russia’s Roscosmos space agency, and he’s since flown on two missions to the ISS. His first, in 2005, was a NASA Space Shuttle mission, and in 2009 he flew back to the space station on a Russian Soyuz spacecraft. He’s logged a total of 177 days in space.

All four Crew-1 astronauts will join Expedition 64 alongside NASA astronaut Kate Rubins and Russia’s Sergey Ryzhikov and Sergey Kud-Sverchkov. They arrived at the space station aboard a Russian Soyuz spacecraft last month.

Why is this important?

NASA has been anxiously awaiting this mission for a decade.

The United States was left without the ability to fly its own astronauts to and from the ISS after the Space Shuttle program retired in 2011. For years, Russia’s Soyuz spacecraft was the vehicle keeping the space station staffed.

SpaceX changed that with the Crew Dragon’s inaugural crewed flight over the summer — the “Demo-2” test mission — which flew test pilots Douglas Hurley and Robert Behnken to begin a two-month stint on the ISS. But the primary goal of that trip was to collect data about how the Crew Dragon performs.

The spacecraft that will carry Hopkins, Walker, Glover and Noguchi will have had “a lot of upgrades” based on what NASA and SpaceX learned from that flight, according to NASA’s Steve Stich. The spacecraft’s solar panels, for example, were bolstered to make them more durable.

Now that the Crew Dragon has been officially certified as a vehicle worthy of carrying humans, NASA plans to see it fly multiple trips to the ISS every year, carrying new groups of astronauts — and perhaps, one day, private citizens.

Those frequent trips will keep the ISS better staffed than it has been for the past decade, and that should drastically increase the amount of scientific research that can be carried out, according to NASA.

Is it safe to launch during a pandemic?

According to NASA, yes.

The astronauts have been in strict quarantine together, and extra precautions are being taken to keep everything clean.

NASA, SpaceX and military personnel will need to gather in control rooms to support the launch, and they’ve implemented additional safety measures to combat the spread of COVID-19.

One thing NASA can’t control, however, is how many people crowd onto nearby beaches in Florida to watch the rocket take off.

During Crew Dragon’s last mission in May, thousands of people packed into tight crowds on public beaches to catch a glimpse of fiery takeoff. Soon after, Florida became a COVID-19 hotspot, though its not clear how many cases were linked to the rocket-watching crowds. More than 17,200 people in the state have died from the virus.

Florida’s rate of infection has since drastically decreased, but NASA officials are once again begging tourists to stay home and watch the livestream of takeoff.