What it means to be a patriot? Experts say it’s not easy to define 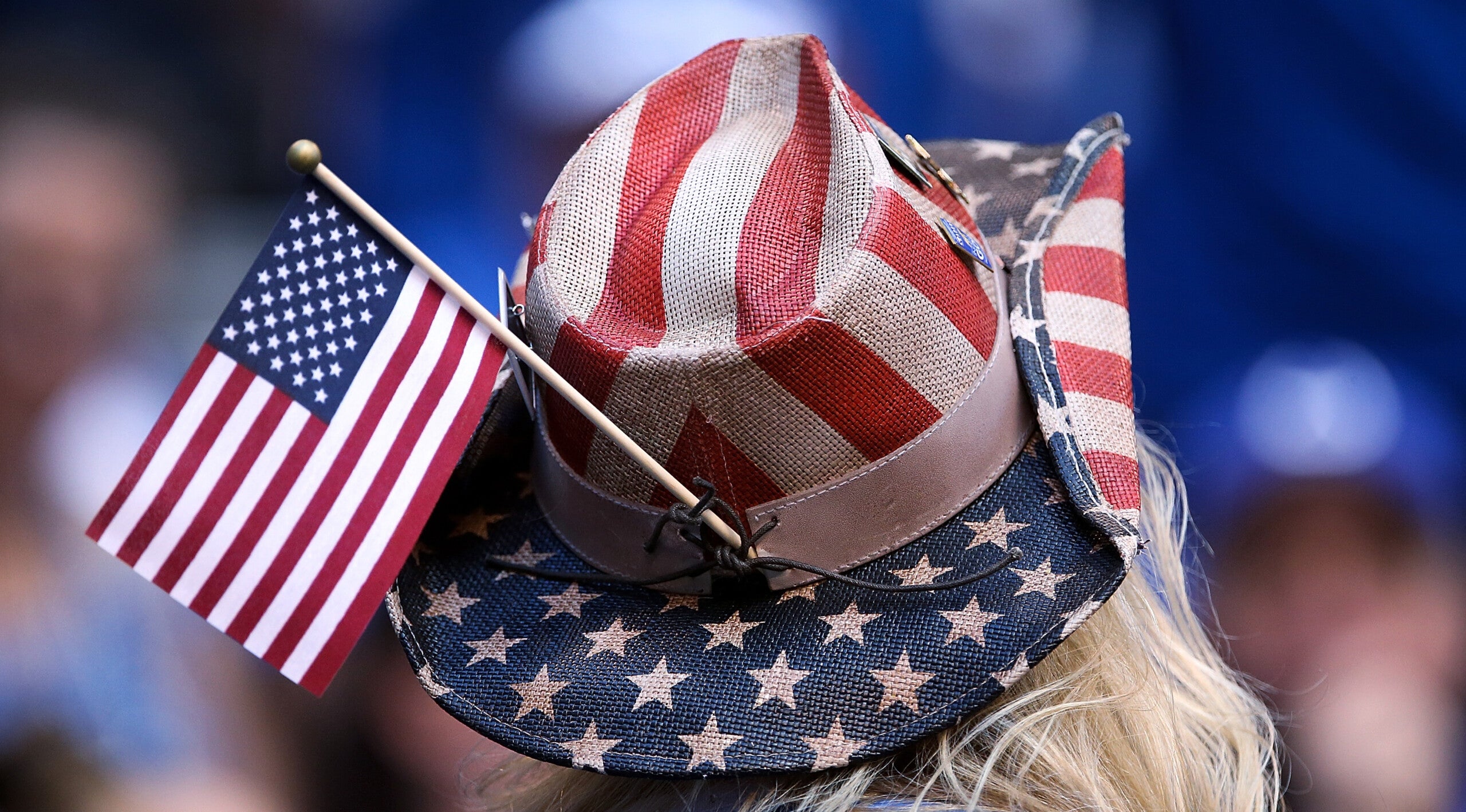 (CNN) — For many, being considered a patriot is as American as it gets.

Of the millions of words in the English language, the word “patriot” has long instilled a sense of pride in Americans. By definition, it means “one who loves and supports his or her country,” according to the Merriam-Webster dictionary. One expert told CNN calling someone a “patriot” brings with it a higher level of pride and respect, putting a person on par with the founders of this country who are seen as the original patriots.

It’s a word that’s supposed to bring unification and joy, but throughout history, it’s also divided and excluded people.

In modern times, conspiracy theorists and extremists — including some members of the groups who participated in the Capitol riots on Jan. 6 — have latched on to the word “patriot” as a way to describe people who are purely American and (usually) White. Those who are not patriotic are against the US and everything it stands for, making them the enemy.

At the same time, the word is still used in popular culture to illustrate the heroes of America, who were incidentally fighting against people who they deemed weren’t American. An advanced search on IMDb finds at least 94 popular movie and TV show titles that are related to “patriot” or “patriotism.”

So what makes “patriots” such a unifying, yet divisive word at the same time? Here’s a look at the history of it and its context.

‘Patriot’ is derived from a French word

Like most words, “patriot” does not have English origins.

It’s derived from the Greek word “patrios,” which means “of one’s father.” “Patriot” entered the English lexicon through the French word “patriote,” meaning “fellow countryman” or “compatriot,” according to Merriam-Webster.

There’s never been any arguments about the literal definition of “patriot,” but it’s context — usually political — is what has changed over time, according to Kristen Syrett, associate professor of linguistics at Rutgers University/New Brunswick.

During the 17th century, a patriot in Europe was someone who loved their country and agreed with the established government, religion or both, Merriam Webster’s essay on the word states.

The word then changed in meaning and connotation as infighting in Europe led to the formation of new nations such as America.

During the American Revolution, “patriot” had a positive connotation in America, but a negative one in England, Sokolowski said. It’s because of this that the founding fathers are seen as the epitome of patriotism.

“It kind of made them religious figures,” Sokolowski said.

The unabridged definition of “patriot” in Merriam-Webster’s dictionary also says it is someone who is a member of a resistance group. That definition has not been updated in at least 30 years, Sokolowski said.

In the Oxford English Dictionary, one of the oldest in the world, an entry of “patriot” was revised in 2005 to say: “An opponent of presumed intervention by federal government in the affairs of individuals, esp. with respect to gun and tax laws. Frequently in the names of right-wing libertarian political and militia groups.”

A spokesperson for Oxford’s Languages team told CNN in an email the definition was part of a regular series of updates in 2005.

“The definition in question is part of wide range of nuanced uses of the word ‘patriot’ recorded in the (Oxford English Dictionary) and changes were made based on evidence of how the word is used in day-to-day life,” the statement read.

The addition of right-wing groups “traces the direction the language is going,” Sokolowski said.

Hate groups use ‘patriot’ for propaganda

“Patriot” in nativist, nationalistic and hate speech goes back to at least the mid-1800s to the Know Nothing Party, according to Sam Jackson, an assistant professor at the University at Albany who studies patriotism and violence in far-right groups.

“That movement was organized around perception that external influences — like non-White Europeans and others — were a threat to American values,” Jackson said. “By the 1850s, we’re seeing language of patriotism and symbols being used in political ways and to mark people as ‘one of us and one of them.'”

The “us vs. them” attitude of patriotism would continue into the new century and morph into an idea that patriotism is American and anything not American is bad.

“If I say someone is a true patriot, I have a clear idea of what that means and what it means to not be a patriot,” said Syrett, the Rutgers professor. “This is a word that is really conditioned by what our set of values is and what we think we’re fighting for.”

The values of being a patriot for those who had nativist and nationalist ideologies meant that America came first and foremost. Anyone against that particular set of values was seen as a threat, even if that threat was the U.S. government.

The “America first” conditions set the tone for the late 1980s and 90s when conspiracy theorists begin forming what is known as the Patriot Movement, an anti-government movement with White supremacist leanings, according to the Southern Poverty Law Center. This movement culminated in the Oklahoma City Bombing on April 19, 1995.

“The word ‘patriot’ is frequently exploited by people that want to take advantage of this idea of a love for country,” said Hayden, the Southern Poverty Law Center senior investigative reporter. “There is nothing wrong with wanting to do good for your country, but when that passion is corrupted … that is taking good intentions and corrupting them for the purpose of doing harm.”

Some people who stormed the U.S. Capitol on Jan. 6 called themselves patriots.

Former President Donald Trump and his daughter Ivanka have also used the word when referring to supporters.

Ivanka Trump addressed the rioters as “American Patriots” in tweet from Jan. 6 that she later deleted.

Trump also called the rioters “great patriots” in a tweet on Jan. 6.

In July 2019, Trump defended attendees of his Greenville, North Carolina, rally — where members of the crowd chanted “send her back” about Minnesota Rep. Ilhan Omar — calling them “incredible patriots.”

According to Jackson, the University at Albany professor, “When you say someone is a patriot, you’re saying there’s some goodness in them. It validates them.”

In pop culture, “patriot” can bring forth many images.

For some it could be the founding fathers or the generation around the American Revolution, like in the 2000 film “The Patriot” starring Mel Gibson. Others may think of US soldiers fighting for freedom, like those seen in 1998’s “Saving Private Ryan.”

Then there are those movies where the characters embody America going against an adversarial force that represents a threat to American values, much like 1985’s “Rocky IV” or the “Captain America” storyline in the Marvel Movies of the 2010s.

Being a patriot is “a word that addresses identity,” Sokolowski, of Merriam-Webster, said.

“Identity is an enormously personal and political part of language,” he said. “When it comes to identity, you’re getting to something that touches people deeply.”

Syrett said these movies and TV shows depicting patriotism are a reflection of the times and show there is an audience for such content.

“Pop culture not only encourages a change in word meaning but it also capitalizes on a sentiment that is there on the broader public,” she said.

But there are also pop culture disagreements around what constitutes a patriot.

There are some, for example, who would call Colin Kaepernick a patriot. The former NFL star sparked controversy after he sat in protest during the national anthem in 2016 for a pre-season game, saying he would not honor a song nor “show pride in a flag for a country that oppresses black people and people of color.” Kaepernick’s protest was part of a continuing national debate about law enforcement’s unequal treatment of Black people.

Still, others believe that in taking a knee, Kaepernick disrespected America.

In the same vein, Syrett and Sokolowski said there are some who would say the rioters at the US Capitol were patriots, while others may have seen them as terrorists.

Syrett said the discrepancy over who or what is a patriot is a battle of linguistics that has been fought since the country’s founding — when it wasn’t even agreed upon on what it meant to be American.