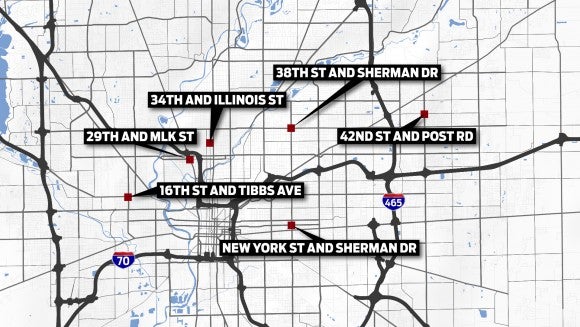 INDIANAPOLIS (WISH) — The second phase of a plan to turn around some of Indianapolis’ most troubled neighborhoods is now underway. New data released by the city Tuesday paints clearer picture of just how much work lies ahead.

The six neighborhoods are deemed as “focus areas” by Indianapolis’ Department of Public Safety. Crime data identified those areas as neighborhoods surrounding the following intersections:

An I-Team 8 analysis last week found reports of crimes on the rise in at least four of them. DPS believes there is a reason behind increases in reported crimes in some of those neighborhoods, and new data released Tuesday may help explain why.

According to comparisons compiled by the city, the six focus neighborhoods, totaling just eight square miles, make up just five percent of Indianapolis’ total population. Yet, they accounted for 27 percent of the city’s homicides last year.

They also accounted for 30 percent of the city’s non-fatal shootings,13 percent of EMS overdose runs and 14 percent of all EMS mental health calls.

Those figures stand in sharp contrast to what would likely have made news headlines for DPS this year:

Citywide, criminal homicides are down by 35 percent so far in 2015, when compared with the same time period on 2014. Other crimes are also down, citywide, from year to year, according to DPS data released Tuesday:

But, the numbers are trending the other direction in the six focus areas, DPS said Tuesday.

But, Riggs also said Tuesday that an increase in crime reports alone may not necessarily be a negative development, because it could mean that residents in the troubled neighborhoods may finally feel comfortable enough to report crimes when they happen. That could drive up numbers.

Crime data suggests as many as 30 to 50 percent of non-violent, property crimes in Marion County may go unreported each year, Riggs has previously said.

“We’re seeing some signs that people are increasing their activity in reporting through our Crime Stoppers numbers. We need them to take the next step and actually report the crime,” Riggs said.

Riggs credited that sharp decrease, in part, to a smoke detector blitz put on by the Indianapolis Fire Department that he said has helped save at least five lives so far in 2015.

But, much work remains in Phase Two of the focus area project, Riggs said, including priority projects like identifying at least 100 of the highest risk prison parolees or other convicted criminals re-entering the focus neighborhoods. IEMS will also be focused on better identification of underlying mental health issues, particularly on drug overdose calls.

“If we can find a way to connect with them, primarily through social workers, through Midtown Mental Health and (others), that’s the key,” said IEMS Director Dr. Charles Miramonti.

“We’re investing a lot of money, time, effort and talent in these areas, because we want to support residents and we believe they deserve better,” said Riggs.

That investment now involves at least 30 different city partners, from faith based ministries to community centers, hospitals and even Indianapolis Animal Care and Control.

But, even with their added involvement, which Riggs was quick to praise Tuesday, he again cautioned that turning the troubled neighborhoods around could take a year or even longer.

“When an officer makes an arrest, that’s usually because of a lot of things that have gone wrong in someone’s life,” he said. “It’s needed at times, we understand that. But, we’re trying to look at those root causes and deal with those. Those are generational. With decades of momentum, you don’t stop them overnight.”