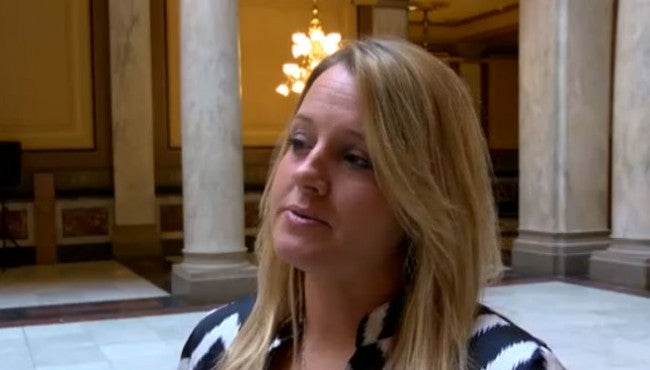 INDIANAPOLIS (WISH) — A mother’s fight for justice has brought change to Indiana.

The mother, Jennifer Lee, said she was not only robbed of her daughter but also a grandchild.

Thanks to Lee’s efforts, someone who commits a similar crime in the future will spend even more time in prison.

Brittany McNew, 18, was shot and killed May 4 at an Indianapolis home. Brittany was 11 weeks pregnant.

Lee said, “This was my daughter’s life. This was our first grandbaby.”

Indianapolis Metropolitan Police Department officers later arrested 27-year-old Jonathan McGee in connection with McNew’s death. McGee’s next court date on the charges in his criminal case is set for May 10.

Lee said, “He got ‘attempted murder’ for the man he came to kill. He got ‘murder’ for my daughter and ‘aggravated battery’ for my grandbaby.”

This week, Gov. Eric Holcomb signed a bill into law that allows someone to be charged with murder, manslaughter or feticide of a fetus in any stage of development. The law excludes legal abortions. The new law said the person could be slapped with an extra six to 20 years behind bars. It’s a law Lee championed from the start.

Lee said, “My first reaction was to call my daughter and tell her we got justice for her baby. There’s no phone call; there’s no hug. There’s no nothing.”

Lee still is calling it a victory for her and her unborn grandchild she named Peanut.

“At the same token,” Lee said. “Peanut’s going to stand up for many babies’ voices that are not heard.”

Lee said she and her family are having an event to honor their murdered daughter and unborn grand child. The “Hope for Peanut” Evening of Hope event will be from 6 p.m. to 11 p.m. April 28 at The Atrium, 3143 E. Thompson Road.

The SIA Legal Team has its own thoughts on the new law. The group of national and state organizations helps people end their own pregnancies without the threat of arrest for themselves or anyone who assists them.

Jill Adams, chief strategist for The SIA Legal Team, said, “We are relieved that Indiana lawmakers have clarified the intent of Indiana’s fetal harm law was never to punish a woman for ending a pregnancy. Women who have lost or ended pregnancies have suffered unnecessarily because of ambiguities in the law, so it is about time lawmakers see to it that nobody else experiences that same humiliation or trauma. There are many more ways the Legislature could go about protecting pregnant women than expanding criminalization, but clarifying that these laws can’t be used to punish pregnant Hoosiers is an important step in the right direction.”