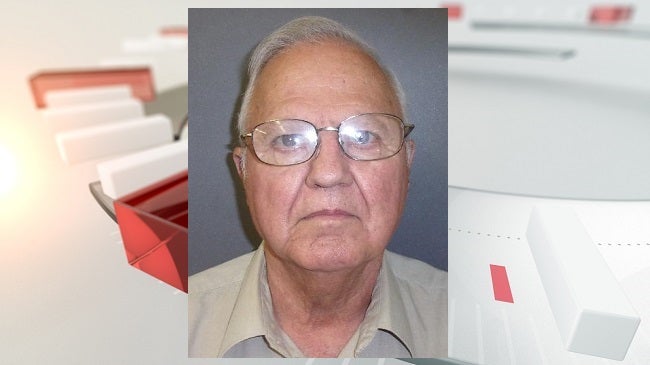 RUSHVILLE, Ind. (WISH) — A 72-year-old pastor already facing several counts of child molestation is in trouble with the law again.

Garry Evans and his wife, Gay, were arrested for trespassing on his son’s property.

The police chief said it’s fortunate no one got hurt, but those threatening voicemails left for Evans’ son by members of his own family are causes for concern.

The family is split by the accusations against Garry Evans.

“It continues to be strange and a bit out of the usual from what we’re used to dealing with here,” Tucker said.

Garry Evans is accused of several counts of child molestation from his time as pastor at Rushville Baptist Temple, where his name is now gone.

Evans went to the home of one of his sons, whose girlfriend told the pair to leave.

When they didn’t, police said the girlfriend brought out her gun.

“Mrs. Evans reached in, according to the complainant, to take the firearm from her,” Tucker said.

“Anytime there’s a firearm at play it’s quite serious. There could have been great potential for any one of these participants to be harmed as a result of the firearm being in play,” the police chief said.

Gay Evans bonded out of jail, but Garry Evans remained in jail Thursday due to his other charges.

This week’s arrest did not sit well with some of Garry Evans family.

Relatives left several voicemails for the son, who shunned his parents entering his home. They were posted on Facebook. Some were angry while others more alarming.

It’s a case that has scarred the town, one that brings out emotions. Chief Tucker said safety is priority one.

“Just stay calm and let the courts do what they need to do put this through its paces,” he said.

Evans next court appearance is scheduled for March on his child molestation charges.