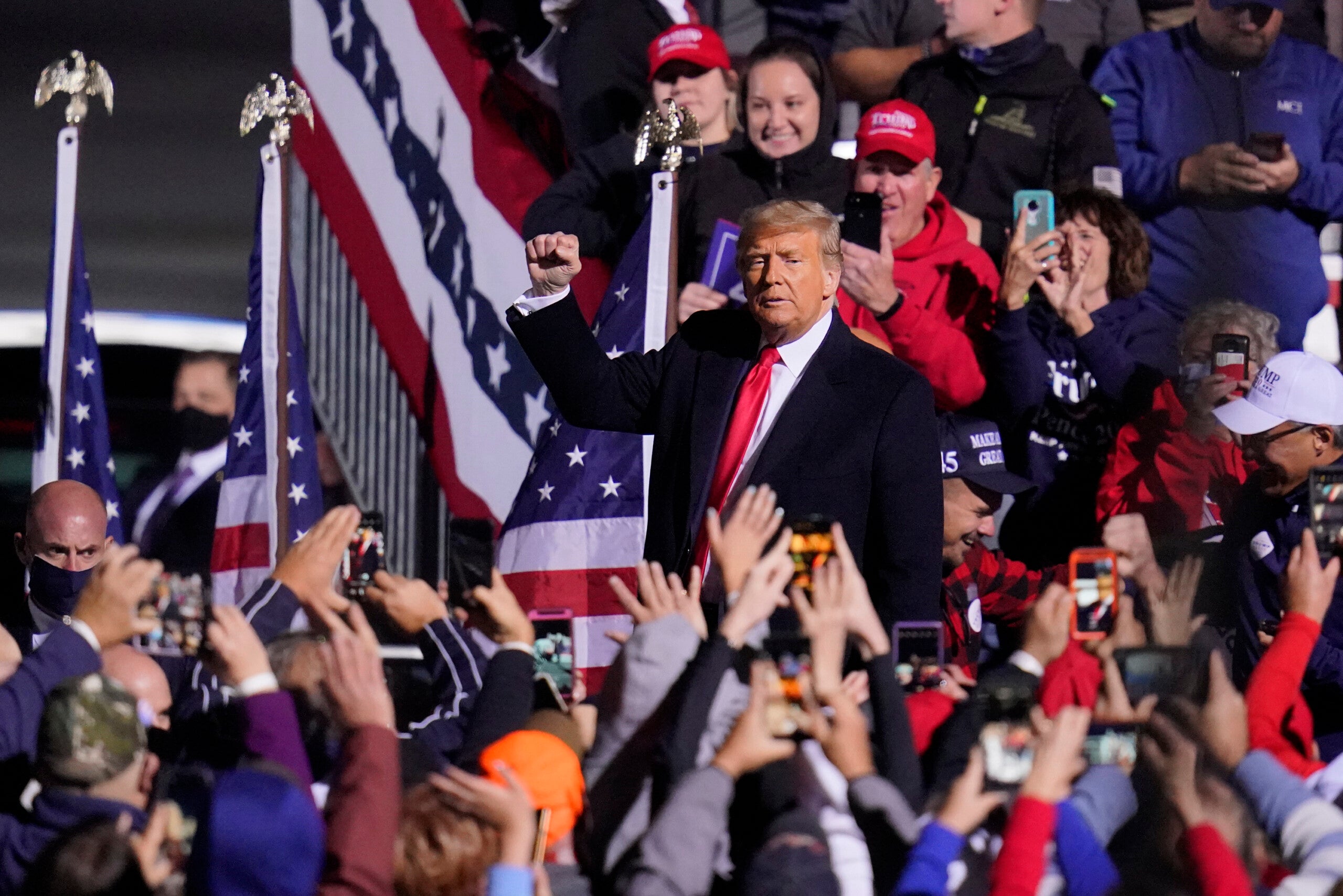 WASHINGTON (AP) — President Donald Trump is being forced to play Electoral College defense with a trip to Iowa, a state he won handily in 2016 but where Democrat Joe Biden is making a late push before the Nov. 3 vote.

Trump’s heavy travel this week, including a rally Wednesday in Des Moines, reflects his uphill climb three weeks before the election. He has already visited Pennsylvania and Florida, will head to another state, North Carolina, he can’t win without and plans stops in Iowa and Georgia, which he once thought were in his grasp but where recent polling shows a competitive race.

The president’s trip to Iowa comes as the state this week surpassed 100,000 coronavirus cases and has seen a recent surge in hospitalizations. Biden has tried to make Trump’s handling of the pandemic, which has killed more than 215,000 Americans, the central issue of the election.

“But President Trump isn’t coming to the Hawkeye State to offer words of comfort to those suffering, or a helping hand to the Iowans who are out of a job, or an actual plan to get the virus under control,” Biden said in a statement. “Instead, he’s here to spread more lies about the pandemic and distract from his record of failure.”

The candidates will have dueling town halls Thursday night on network television — Trump’s in Miami and sponsored by NBC News, Biden’s in Philadelphia and on ABC. Debate organizers last week changed their original plan for a town hall debate that night to a virtual event after Trump’s coronavirus diagnosis, but the president backed out. Biden quickly signed on to his own town hall; Trump’s campaign on Wednesday announced its competing event.

Both candidates tailored their campaigning Tuesday to best motivate voters who could cast potentially decisive ballots.

Biden did not have any public campaign events scheduled Wednesday, an unusual move just 20 days before the election, after visiting Florida on Tuesday to court older voters. He was looking to deliver a knockout blow in a state Trump needs to win while trying to woo a group whose support for the Republican president has slipped.

Trump was in Pennsylvania on Tuesday, arguably the most important state on the electoral map, unleashing fierce attacks on Biden’s fitness for office in his opponent’s backyard.

“He’s shot, folks. I hate to tell you, he’s shot,” Trump told a big rally crowd in Johnstown, saying there was extra pressure on him to win because Biden was the worst presidential candidate of all time. “Can you imagine if you lose to a guy like this? It’s unbelievable.”

In his second rally since contracting the novel coronavirus, Trump spoke for more than an hour to thousands packed in tightly and mostly maskless. Like the night before in Florida, Trump seemed healthy, and his rhetoric on the pandemic — including the dubious claim that it was mostly a thing of the past — changed little despite his own illness, except for his threat to kiss audience members to prove his immunity.

Biden spent Tuesday in Florida, his third visit to the state in a month, looking to expand his inroads with older voters. To Trump, “you’re expendable, you’re forgettable, you’re virtually nobody,” Biden said at a senior center in Pembroke Pines, about 20 miles (32 kilometers) from Fort Lauderdale.

The “only senior Donald Trump seems to care about” is himself, Biden added.

Biden’s campaign believes it can win the White House without Florida’s 29 electoral votes, but it wants to lock up the state to pad a margin of victory over Trump, who has questioned the legitimacy of an election where many people will cast mail-in ballots during the pandemic. Biden has vowed to win Pennsylvania, but if he falls short, his path to victory narrows substantially.

The Trump campaign has grown increasingly worried about states he won handily four years ago, including Ohio, Iowa and, to a lesser extent, Texas. He all but must win at least one of the three Great Lakes states he flipped red in 2016.

But facing stubborn deficits in Wisconsin and Michigan, the president has placed renewed focus on Pennsylvania and its 20 electoral votes.

Trump will have to run up his margins in the state’s rural areas to win, as his prospects have slipped since 2016 in places like vote-rich suburban Philadelphia, where he underperformed by past Republican measures.