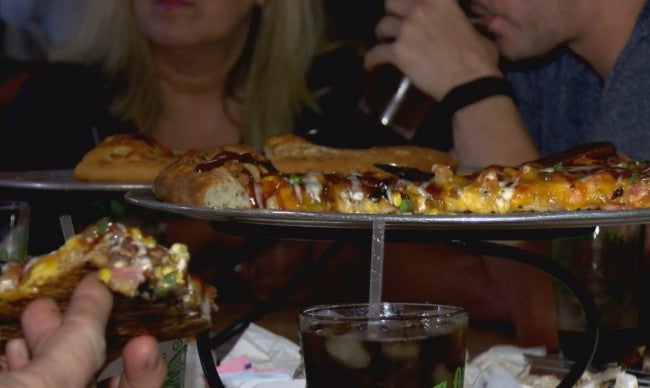 It’s part of a redevelopment plan that has been ongoing for 10 years in Speedway.

Big Woods is known for it’s filling pizza, burgers and beer. On any given day, the restaurant is jam packed. Visitors come from all over the state and farther. Harpa Mikac is visiting all the way from Iceland.

“It was the best pizza I’ve ever had,” said Mikac.

Her son Erik Mikac lives in Bloomington, where a location opened 18 months ago.

“My girlfriend and I wanted the vegetarian’s dish. It was really good,” he said.

During a ground breaking ceremony, Speedway town officials announced plans to build a $2 million restaurant right at the corner of 10th Street and Main Street.

“We realize that this was an extremely critical intersection and we needed to put our best foot forward,” said Redevelopment Commission Executive Director Scott Harris.

It’s all part of a bigger picture. The town has been working on redeveloping the area for 10 years. By years end, Harris said Speedway will start construction on four other businesses: a restaurant, an indoor carting facility, racing team headquarters and a manufacturing plant. Harris says he will make an announcement on the plant this fall.

Big Woods co-owner Jeff McCabe says it was the redevelopment in Speedway that drew them in.

“Speedway just impressed us with the way the city has approached economic development, specifically on Main Street. They showed us a great location. We’re coming in after they’ve done an incredible amount of work to revitalize Main Street,” said McCabe.

Harris hopes with Big Woods, the restaurant will have the same impact in Speedway as it does in Nashville. The pizza joint will create 75 new jobs and bring a unique blend of menu options.

It’s a recipe for success if you ask customers.

“I love it. I don’t have enough time to spend here. I wish I had enough time,” said Harpa Mikac.

Construction for Big Woods is expected to wrap up just in time for the 100th running of the Indianapolis 500 in May.