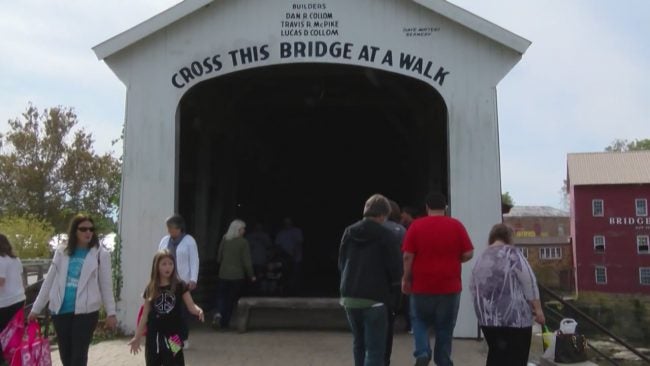 The tents and booths are already set up as vendors have started moving in for the 10-day event. 24-Hour News 8’s sister station, WTWO, talked to one woman Wednesday who is coming back for her 18th year, all the way from Texas.

Vendors will offer a variety of products ranging from crafts to clothing and household gadgets and much more. And while the vendors have their same products to sell, the actual setup can change from year to year.

“This is just the beginning. The ground is uneven. I know that because I’ve been coming for so long, but it makes it a challenge every time because you have to move things around and depending on how the fire department sets up the tent,” says vendor Catalina Lacen.

And it’s not just festival officials or vendors getting set, but all of Parke County.

The county expects nearly two million people to visit for the ten day event. It’s the biggest festival in Indiana, and one of the top ten festivals in the country.

While “Covered Bridge” is sure to cause some headaches and long days for the people of Parke County, the community as a whole says it is well worth it.

“It’s basically the Christmas season. You know the 10 days is the push for Christmas and we’ve got some new businesses that have opened in town so you know Rockville is growing,” says G & M Owner, Gary Nicola.

While the community is excited, they know the next few weeks will be quite busy.

Businesses on the Rockville square will be doing the same, opening early, and not closing until the last shopper is out.

And with the massive influx of people, delays are expected.

“Traffic, people just have to be patient. There’s no room to move them so we have a few minor fender benders and some angry people, but most generally everybody that comes to the festival knows what they’re expecting and it’s long lines, traffic and hard to find parking spot,” said Chief Kneeland.

During recent festivals, the county hasn’t had too many problems with accidents or pedestrian injuries and Chief Kneeland would like to see that continue.

“Just be careful, and drivers should be slowing down, paying attention to their surroundings.” Chief Kneeland added. “Try not to watch the side of the road as much as they are watching the road. Don’t try to window shop driving down the road.”

While there may be some headaches involved, shop owners in the area say it’s vital to their business, not only growing the festival’s future, but also building clientele all year long.