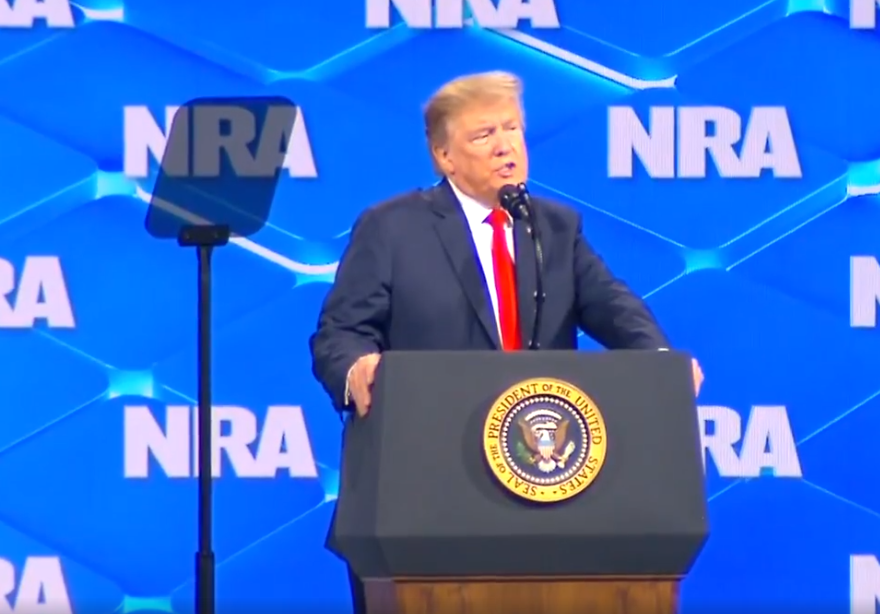 INDIANAPOLIS (WISH) — The 148th NRA convention is in full swing at Lucas Oil Stadium in Indianapolis.

President Donald Trump and Vice President Mike Pence flew into Indianapolis to speak at the event.

Vice President Pence stepped into a familiar role as the champion for this administration. He wasted no time taking shots at democrats for their attempts to push any gun control legislation.

“Men and women of the NRA the stakes have never been higher, the choice has never been clearer. It will not be enough to just win the next election we have to win the next generation,” said Vice President Mike Pence on Friday. “This is our challenge it wouldn’t be easy it never has been. We are ready to stand with all of you to fight to defend and expand freedom for every American.”

President Donald Trump takes the stage at the NRA convention

President Donald Trump spoke after Pence for almost an hour. During his speech the president removed the United States from a United Nations arms treaty.

He said America is “rejecting this treaty” and “taking our signature back.”

Tens of thousands of people are expected in Indianapolis for the NRA convention with events lasting through the weekend.

While thousands gathered inside Lucas Oil Stadium, it was a much different scene outside the courthouse.

Instead of guns, they had signs. Groups protested during President Trump and Vice President Pence’s arrival at the NRA conference.

It wasn’t a large group but their message was clear.

About 30 people walked from the state house to Lucas Oil Stadium. Although each protester’s motive was different, the overall message was the same.

Many voiced their concern about school safety and the idea of teachers being armed.

Protesters said they believe having more guns in school would only cause more problems.

Other protesters wanted tighter regulations on who can legally purchase a firearm, suggesting background checks for all firearm purchases and other avenues that they said would keep guns out of the hands of the wrong people.

“I have lost 3 former students due to gun violence. I am just fed up with it. I think there should not be guns in schools. There should be fewer guns in schools rather than more and I think the more guns you have in a space that you know about the more tense and stressed people get,” said former Indiana Public Schools teacher Nina Rozes.

“We have got mass shootings everywhere and our president thinks that we should speak at the NRA? Like I don’t understand, when our children are dying in schools,” added protester Kim Saylor.

Though the city banned the giant Donald Trump baby balloon from appearing near the conference, protesters brought smaller versions of the balloon that gained quite a bit of attention and even brought a few people in to join the march.

The police presence was strong in the protesting, the protest stayed peaceful for the most part.

Due to the large crowds traffic closures were implemented Friday.