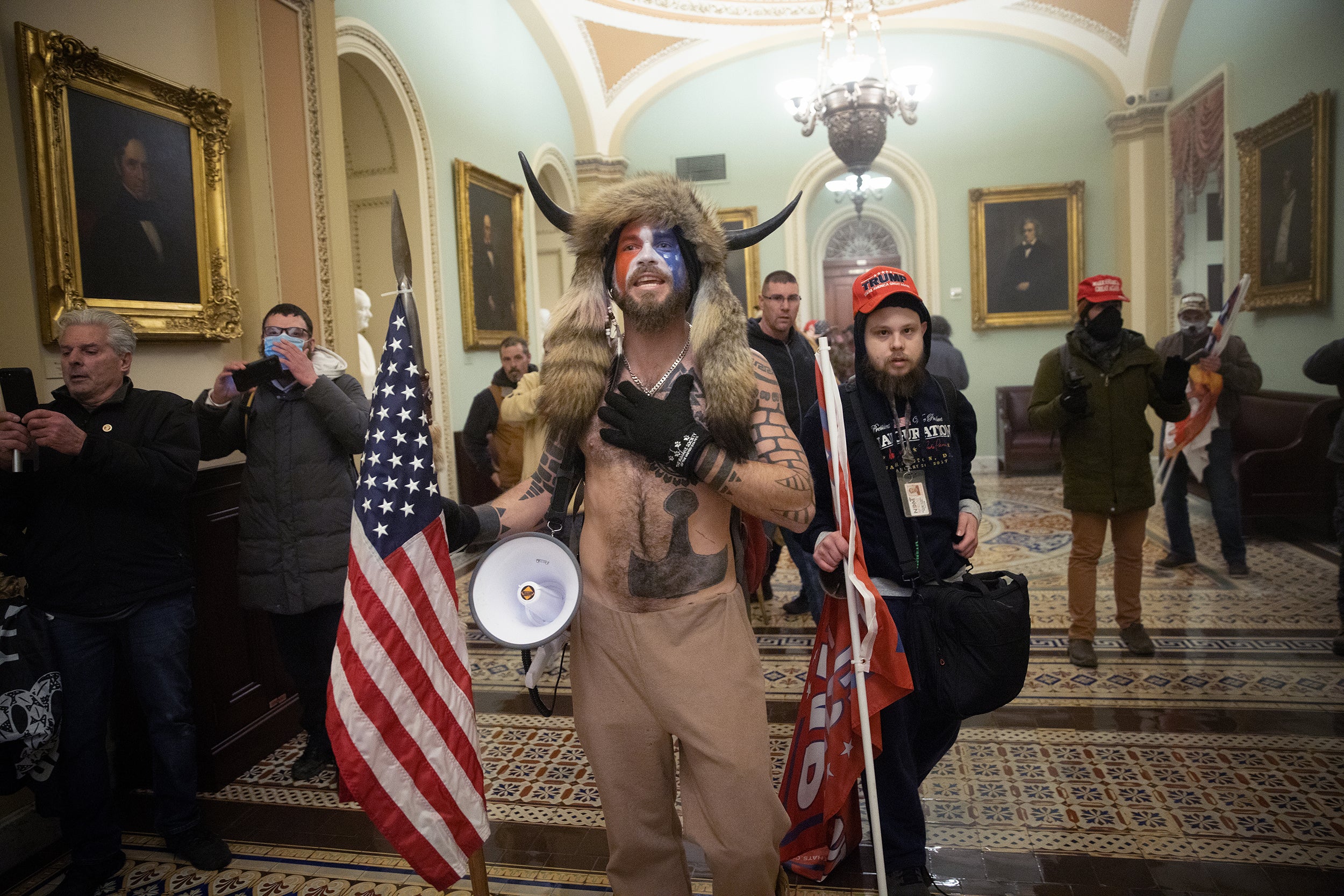 (CNN) — The Justice Department is asking for the so-called QAnon Shaman, who wore a headdress and posed shirtless on the Senate floor during the siege of the US Capitol, to be sentenced to a prison term of more than four years, the longest incarceration prosecutors have asked for any guilty Jan. 6 defendant so far, according to a new court filing.

Prosecutors’ request for the high-profile Capitol riot defendant Jacob Chansley is as a harsh assessment of his crime and calls him “quite literally, their flagbearer” among the mob on Jan. 6.

In their sentencing request to the judge filed late Tuesday night, prosecutors made clear they hope to use Chansley’s sentence as an example to deter future attacks on the government.

The attempted coup, prosecutors wrote, “has made us all question the safety and security of the country in which we live.”

“Those enormous harms, borne out of the acts of this defendant, must be deterred so that we never see a similar assault on our democracy again,” they continued.

Chansley is set to be sentenced next Wednesday by Federal Judge Royce Lamberth of the DC District Court, as one of the first felony defendants to receive his punishment. He has been in jail for nearly 10 months.

Chansley, from Arizona, is a well-known figure in the QAnon movement and one of the most infamous of the January 6 rioters. Federal authorities zeroed in on him quickly after the attack, making him one of the earliest charged defendants out of more than 650 in total so far.

Now, in this latest court filing, they heap responsibility for the riot onto Chansley, because of how he spread political disinformation online before Jan. 6.

“We shall have no real hope to survive the enemies arrayed against us until we hang the traitors lurking among us,” the prosecutors quote Chansley as writing on Facebook to his thousands of followers in mid-November 2020.

“The government cannot overstate the seriousness of the defendant’s conduct as a one of the most prominent figures of the historic riot,” prosecutors wrote in their sentencing request to the judge late Tuesday. “The severity of his actions, and respect for the laws of this country, must be impressed upon him.”

The Justice Department asks for the judge to sentence him to 51 months in prison, followed by three years on supervised release, a calculation at the high end of US Sentencing Commission guidelines for a defendant like Chansley. A violent rioter who is set to be sentenced on Wednesday by the same judge drew a lesser recommendation from prosecutors of 44 months in prison.

Pictures of Chansley at the Capitol went viral because of a bizarre appearance — shirtless, with face paint and a horned, furry headdress — while leading others through the Capitol, shouting into a bullhorn. As one of the first 30 rioters inside the building, he made his way to the Senate dais that was hastily vacated earlier by Vice President Mike Pence, and left a note, according to his plea documents.

Chansley also carried an American flag on a speared flagpole, which prosecutors have characterized as a weapon.

Since his arrest, Chansley has continued to stay in the public eye, by asking then-President Donald Trump for a pardon, going on a hunger strike in his attempt to get organic food while in custody and by speaking to “60 Minutes” from jail without permission.

Prosecutors allege Chansley’s showed little remorse after the attack, according to their filing on Tuesday.

In September, Chansley pleaded to a felony charge of obstructing Congress’ certification of the 2020 vote. He has already agreed to pay $2,000 in restitution for contributing to damage at the Capitol, and that is likely to be part of his sentence as well.

He is asking the court to sentence him to time served, so he would be released from jail immediately.

The judge will have wide latitude to sentence Chansley as he sees fit. The maximum sentence he can receive is 20 years in jail, though a sentence even nearing that amount is unlikely.

Chansley’s lawyer has so far attempted to cast him as a peaceful part of the crowd at the Capitol — a person struggling with mental health issues who merely was responding to an “invitation” from Trump to enter the building. Afterward, his lawyer noted, Chansley took initiative to cooperate with federal criminal investigators.

“He was not an organizer. He was not a planner. He was not violent. He was not destructive. He was not a thief,” his court filing said on Tuesday in advance of the sentencing. “It is time for the Shaman to start on his journey to freedom — not from jail, but from mental health infirmities of significance.”

All Indiana Bets / 9 mins ago