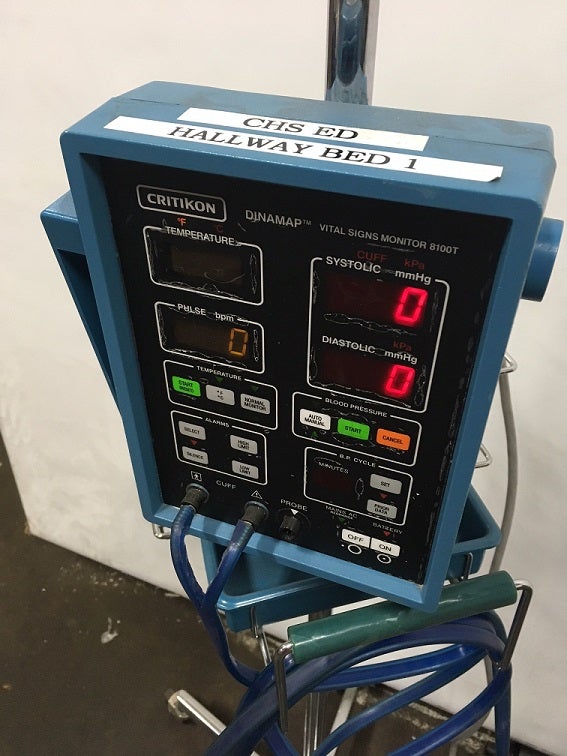 INDIANAPOLIS (WISH) — More than $1 million worth of medical equipment has disappeared from the Indianapolis VA Roudebush Medical Center in recent years, an I-Team 8 investigation has uncovered.

At best, VA officials concede that the losses are small in terms of the inventory’s size, but may indicate poor record-keeping. At worst, the records show a systemic pattern of hundreds of thousands of dollars worth of items that go missing each year at the Indianapolis VA.

What’s more, I-Team 8 discovered that four years after the VA inked a massive $543 million contract to install tracking devices on these items – hundreds of thousands of dollars’ worth of items still go missing each year. And the technology has been implemented in only about a third of 152 VA medical centers nationwide.

In reacting to I-Team 8 investigation, Sen. Joe Donnelly said he would look into the matter.

“Anytime processes are in place that are being followed it’s concerning,” Donnelly said. “My obligation and my passion is to make sure that veterans receive the proper healthcare they deserve. We’ll looking into that right away.”

Sen. Todd Young’s office released a statement to I-Team 8 on Friday stating: “This latest mark on the VA Roudebush Medical Center is unacceptable and confirms the continued need for reform, accountability, and the transparency at the VA. We owe at least that much to our veterans. I am committed to robust congressional oversight over the VA to ensure that our veterans are properly cared for, and that our tax dollars are well spent.”

“Medical equipment going missing at VA facilities is not only wasteful and expensive, it jeopardizes veterans’ health. The VA has the tools needed to help prevent equipment loss and theft, but the slow and incomplete implementation of these solutions is unacceptable. Hoosier veterans whose lives depend on receiving quality care at VA facilities deserve urgent action to fix these problems, not more delays. I will continue to monitor this situation and hold the VA accountable to ensure our veterans get the care they earned.”

Some of the lost items – like a $28,000 surgical drill or $22,000 worth of patient lifts – have vanished without explanation. Other items, like smaller hand-held medical devices, may have been stolen, documents show.

In one inventory record, obtained by I-Team 8 under the federal Freedom of Information Act, a VA survey official writes: “another varying problem is that some items are easily able to be put into staff pockets due to the size and the equipment leaves the facility and does not return.”

Other records show “communication is extremely poor” between two VA campuses in northern Indiana which they suspect leads to more items being lost.

I-Team 8’s review of three years’ worth of inventory records from the Indianapolis VA found that – between 2014 and 2016 – the Indianapolis VA lost more than $1.5 million worth of items. Those same records show about $520,000 worth of medical supplies and equipment were later discovered upon additional searches. That leaves the total amount of missing equipment over that time period at more than $992,000.

Officials with the Indianapolis VA refused to be interviewed on camera, but did release a statement saying:

With assets in excess of $124M, our ongoing inventory indicates less than one percent falls into the misplaced category. This does not imply a perfect record or apathetic concern; items are lost, missing and not found. Though we regret every missing item, we continuously strive to improve our asset management program including the recent implementation of the Maximo asset management system just this month. This culture of constant improvement serves the best interest of Veterans and taxpayers and anything we can do to improve our ability to serve Veterans is worth our time and energy.

But veterans interviewed by I-Team 8, including Robert Szramoski of Anderson, Ind., said that the VA’s explanation falls short of expectations.

“There is no reason this should be happening with today’s technology, not at all,” Szramoski said. “It just boggles the mind.”

You can view the VA’s own lost and found records here.The VA’s $543 million plan to address it falls behind

In February of 2013, the VA inked a massive $543 million contract to provide real-time location systems or – RTLS – in an effort to help improve asset management and help curb the number of items being reported lost at all 152 VA medical centers nationwide.

But to date, the technology – that includes placing tracking devices on medical supplies and equipment – has only been installed in about a third of the VA’s medical centers in the U.S., VA officials in Washington tell I-Team 8.

A 2013 news release from the VA’s subcontractor – Intelligent Insites – notes at the time that “initial case uses will include asset management, cath lab supply management, sterile processing workflow and automated temperature monitoring.” But four years later, less than 10 percent of the inventory at the Indianapolis VA has been equipped with tracking devices that can send out a signal pinging their exact location. Roughly 70 percent of the items at the VA Roudebush Medical Center have been given passive tags that allow for VA technicians to scan for them individually or in groups, according to Kimberly Brayley, the VA’s Program Director for the RTLS technology.

VA officials in Washington could not explain why the technology has been not been fully implemented four years after inking that $543 million contract in 2013. Both Brayley and Cokl said that the implementation is still underway but that real-time tracking was not fully operational in every medical center.Numbers by comparison

Phil Shealey, the assistant director at the VA’s Northern Indiana Health Care System, agreed to talk to us about how RTLS technology works at his two campuses in Fort Wayne and Marion.

Like Indianapolis, Shealey says the losses at his campus represent less than one percent of his $46 million inventory. Still, he agrees he’d like the number of lost or stolen items to shrink.

When it comes to larger items, especially older medical equipment or devices that appear to be beyond their natural shelf life, Shealey said the lost or misplaced item is likely to do an administrative error.

“Something fell through the cracks,” he said.

But when it comes to smaller items – like that $28,000 surgical drill we referenced earlier – he believes those could have been stolen.

“When it comes to (those items) it unfortunately could have been theft,” Shealey told I-Team 8 during an interview at the VA Marion Medical Center.

Shealey says that the RTLS technology has been somewhat successful at the VA’s NIHCS two campuses. When asked directly if it is successful, why has it not been fully implemented nationwide? Shealey said the VA is large system and that the four-year timetable for a roll out was not surprising to him.

While Shealey contends that the RTLS can help reduce theft or loss with these medical devices, his counterparts in Washington disagree to an extent.

Brayley contends that RTLS is not designed to be a loss prevention technology but rather to use the technology to help VA employees locate items “they are looking for.”

But the intention in that 2013 press release from the VA subcontractor appears to be clear – the intial phase was supposed to include asset management. Brayley admits the VA is not fully utilizing the technology to track items in real-time to date.

You can view some of the VA’s own lost and found records here.