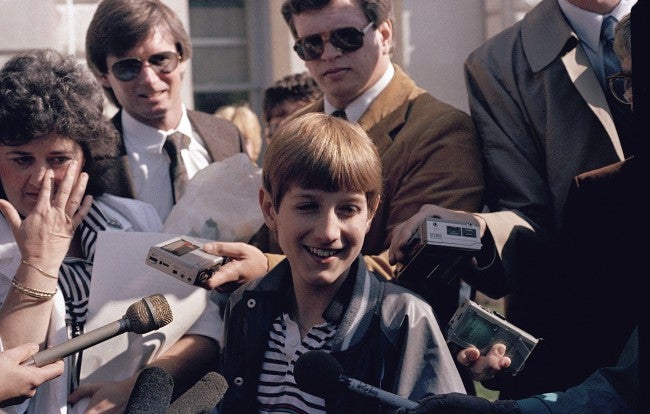 INDIANAPOLIS (WISH) – It has been 25 years since an HIV positive student’s physical struggle ended and his legacy began.

Ryan White, 18, died on April 8, 1990 while receiving treatment at Riley Hospital for Children.

Five years earlier, White was diagnosed with HIV after receiving a contaminated blood treatment for hemophilia.

He became the victim of discrimination and misunderstanding while trying to attend school in his hometown of Kokomo. The legal battles received national media attention.

Three months before his death, WISH-TV’s Dick Wolfsie interviewed White as his health deteriorated. Wolfsie was producing and hosting a live talk show in Indianapolis at the time.

“It took a very special young man in that position to become the iconic symbol of this struggle because if he had been another kid who wasn’t as open and wasn’t as honest, wasn’t as sensitive, wasn’t as brave, everything would have been different,” Wolfsie said.

Wolfsie’s one hour conversation with White would be the teenager’s last interview.

“I remember saying to him, ‘Are you afraid to die?’ Which is a good example of a question where you ask that on live television and I had no idea how he was going to react to that,” Wolfsie recalled. “He had a wonderful answer. He said, ‘If I were afraid to die, I would be dead already,’ That gave me a real chill.”

A one-on-one interview at the time with White was not easy and proved to be the most nerve-racking the reporter had over decades of experience.

“If something were to happen that were to embarrass him, if I were to ask an inappropriate question; you can’t take that back,” Wolfsie said.

A new lecture series has been created at The Indiana University School of Public Health-Bloomington. The Ryan White & William L. Yarber Lecture Series opened thanks to the generous support of Yarber, a nationally and internationally recognized faculty member, scholar and researcher at the school.

Speakers invited to the lecture will be honored with the Ryan White Distinguished Leadership Award. For more information click here.