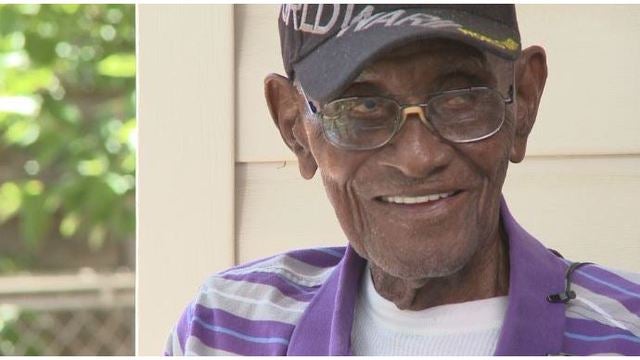 AUSTIN, Texas (KXAN) – The oldest living World War II veteran and oldest living man in the U.S. turns 112 Friday, and his family and friends are celebrating by inviting everyone to stop by and see him.

Richard Overton, born in 1906, still lives in east Austin in the house he built 72 years ago. Overton moved into the house, now on a street named after him, in 1946, and still spends his days on his front porch, smoking cigars and drinking whiskey.

“I feel fine every day,” Overton told a gaggle of reporters and photographers gathered outside his home on Thursday. “No pain and no aches.”

Hanging on his porch over his head were two types of t-shirts family friends are selling Friday. One features the photo of Overton smiling alongside the mural depicting him at 12th and Chicon streets, and the other a photo of the man with a cigar with the caption, “Keep Austin Ashy.”

Another friend, Chaka Dada of the hip-hop group Riders Against the Storm, had 112 shirts made with the words Overton told to Steve Harvey when the pair met: “Keep living, don’t die.”

The friends plan to donate some of the money from the shirts to Overton’s GoFundMe page to finance his round-the-clock in-home care.

Overton’s party is planned for Friday afternoon from 4-7 p.m. at his home at 2011 Richard Overton Avenue. The public is invited to stop by and wish him well.