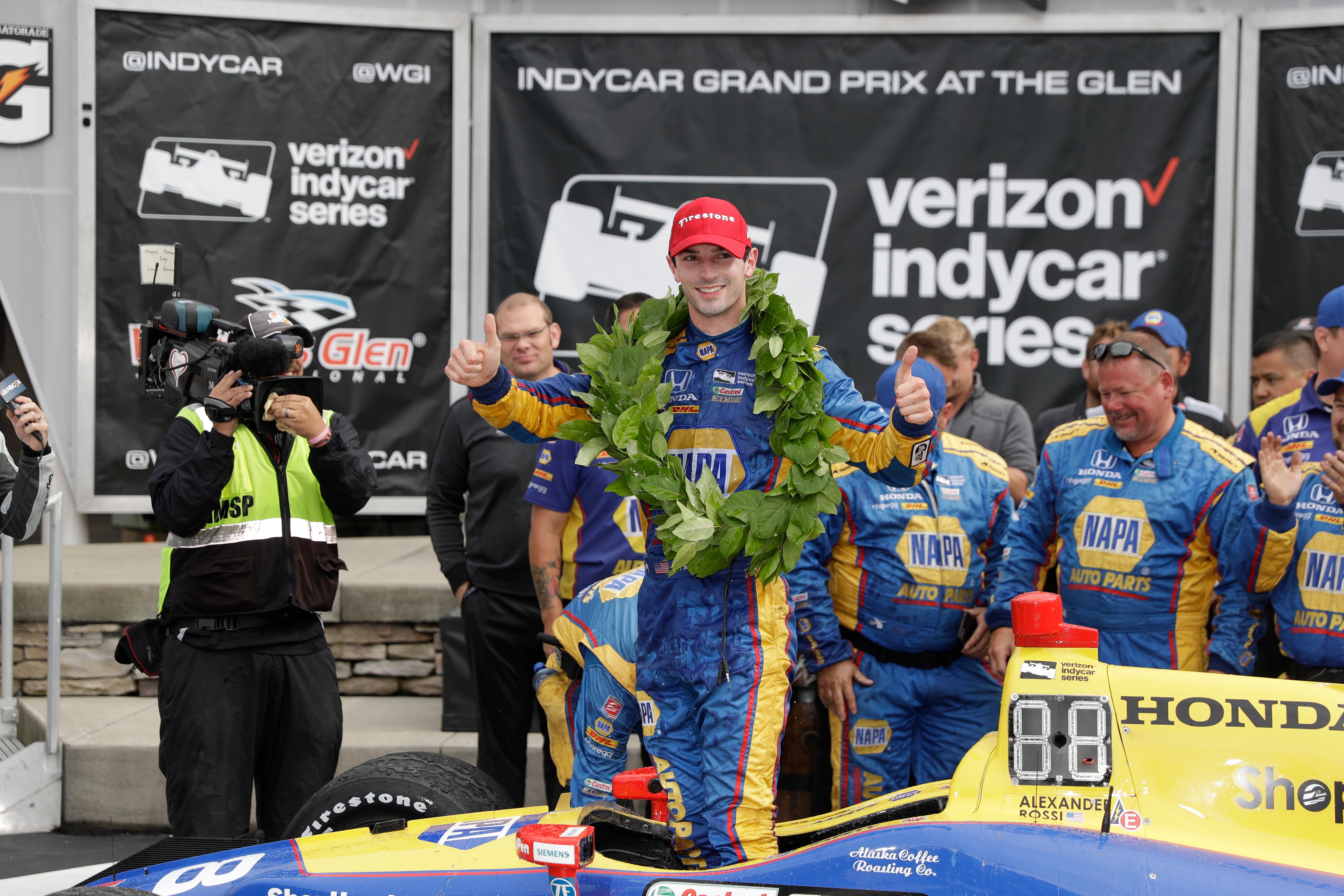 Rossi used a stroke of good fortune to win the IndyCar Grand Prix at The Glen on Sunday from the pole, leading just over half of the 60-lap race and easily holding off four-time series champion Scott Dixon over the closing laps at Watkins Glen International for his second career victory. His first one came last year in the 100th running of the Indianapolis 500.

“Today I was finally able to prove what I’ve been talking about the past month, two months, in terms of the step forward Andretti Autosports has taken,” said Rossi, who has five straight top-six finishes. “We have the package in the car and the people to be at the front. Just had things go wrong and we weren’t able to execute fully.”

The win was the 57th Indy car triumph for Andretti Autosport and the team’s first win at Watkins Glen. It was somewhat overshadowed, though, by the sudden fall by Newgarden after a costly error in the pits that relegated him to an 18th-place finish.

Dixon’s second-place finish for Chip Ganassi Racing erased most of Newgarden’s 31-point lead and left the four-time champion just three points behind heading to the season finale at Sonoma next week, which is worth double points.

“I’ve been in situations like that,” Dixon said. “I think you just got to treat next week as another race. I think you can’t overcomplicate it. Obviously, we want to win it. There’s a lot on the line. But, you know, I think if you overthink things too much, then it ends up being a very bad thing.

“I’ve never raced Josef, really, in a championship like this,” said Dixon, who stole the title from Juan Pablo Montoya two years ago by winning the finale to earn the double points. “You can have a pretty hefty swing.”

Newgarden, who has a series-high four wins, took the championship lead for the first time in his career after his win at Mid-Ohio in late July. His victory last week at Gateway Motorsports Park over Penske teammate Simon Pagenaud was his third in four races and seemed to stamp him as the man to beat.

Then his lead in the standings vanished in a flash at Watkins Glen.

After taking his only lead of the day, Newgarden pitted with 15 laps to go around the 11-turn, 3.37-mile natural terrain road course. But he slammed the guard rail exiting the pits when his front tires locked up and he veered left into the blue steel barrier. He was hit from behind by Sebastien Bourdais, breaking part of the rear of the No. 2 Chevy. That brought out a caution and Newgarden had to pit again, his crew frantically working on the car as he fell two laps down.

“It was going to come down to Sonoma,” Newgarden said. “I made a mistake. It looks like a pretty stupid error, but it’s easy to do. I just made a miscalculation …. came out of the pits too hot.

“It was one small thing, but those small things add up at the end of the day. It’s all on me,” he said. “It’s not good for the team, but they’re resilient. I’m sure they’ll give me what I need at Sonoma.”

Other things to know about the IndyCar race at Watkins Glen International:ROSSI’S SPECIAL WEEKEND

Rossi also inked a contract extension with Andretti Autosport that was announced on Friday, and he won his first career pole Saturday by zooming past Dixon on his final lap.

That good fortune seemed to change on lap 24 when he had to pit off sequence because of problems with his refueling adapter. A 12-second stop left him back in 18th, but when the third caution flew one lap later, Rossi regained the lead.

“I thought we were pretty much done,” Rossi said. “We were fortunate … to have that yellow come out to where it negated those little things that had gone wrong.”

Rossi led Dixon on the final restart and it became a two-car race over the final laps between a four-time winner at Watkins Glen and a driver racing at the famed road course for only the second time, but Dixon never threatened.HELIO’S STILL ALIVE

Forty-two-old Helio Castroneves finished fourth and remained in third place in points, now just 22 behind his teammate in the quest for that elusive first career title. He’s finished second in points four times.

“I will do everything to bring the championship home for Team Penske,” Castroneves said. “It’s a big battle right now.”

Also in the hunt is defending champion Simon Pagenaud in fourth, 34 points behind teammate Newgarden after a ninth-place finish at The Glen.WHAT RAIN?

Rain that was forecast never materialized, although the race began with the teams on rain tires due to moisture on the track from earlier showers.RESULTS