School bus need: ‘WISH-TV stepped right in there and got it taken care of’ 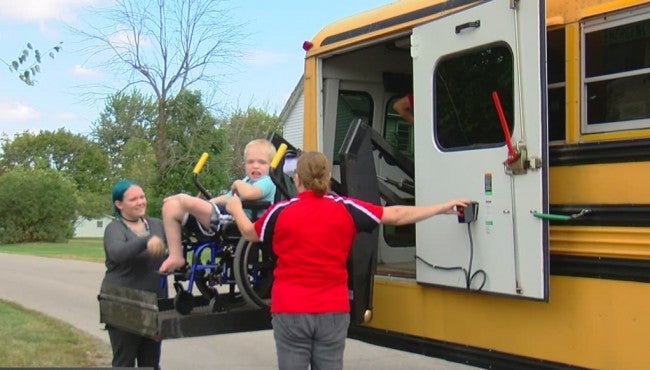 HARTFORD CITY, Ind. (WISH) — Getting kids ready for school and on the bus every morning can be a big job.

But, it’s an even bigger job when children have special needs. One mom said her school district was making it even more difficult. She said they refused to treat her son with the same courtesies as other students with special needs, so she contacted I-Team 8.

Chadd is in a wheelchair and fully depends on his mom for everything. Fraze said Chadd spent much of his life in Riley Hospital of Children at IU Health in Indianapolis and has a very weak immune system, which makes waiting outside in the cold for the bus very tough. So, Fraze asked repeatedly for the bus to pick him up at their door — as is stated in the Individuals with Disabilities Education Act.

“It makes me angry, but it also kind of upsets me because it’s like you can push and do all that you can and try to be the good parent and your child’s advocate and I feel like I’m not getting anywhere,” Fraze said.

Amber Bye, another mom who lives in the same apartment complex and also has a son with special needs, echoed Fraze’s concerns.

I-TEAM 8: “So other kids on this bus are getting door-to-door service?

BYE: “Yes, and my child is not because we live here.”

I-Team 8 called the Blackford County School District and reached out to Superintendent Chad Yencer to ask why they refused to pick Fraze’s son up at his door — or at least farther back inside the apartment complex.

“I think that they just don’t understand how much of a difference it would make,” Bye said.

After weeks of calls, a new small school bus arrived to pick Chadd up at his door!

“It’s upsetting that it took all of that to get something accomplished for our kids, but it let them know that we were serious, and WISH-TV stepped right in there and got it taken care of, and we’re very grateful for that,” Fraze said.

When we spoke with Superintendent Yencer, he said they were already planning to buy the smaller bus before we got involved as part of their annual bus replacement plan. But, he did not have an explanation as to why the district had previously refused to drive the existing bus farther into the complex. The new small bus picks up Chadd every day and is also used wherever else it’s needed throughout the district.