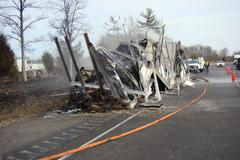 SEYMOUR, Ind. (WISH) – The northbound lanes of I-65 near Seymour were closed for about four hours Monday because of a semi-trailer fire and a multi-vehicle car accident.

Indiana State Police say Clifton Bennett, Jr., 48, of Sunman, Ind. was driving his 1985 Western Star tractor/2013 Great Dane Trailor near the 44-mile marker of I-65 when he realized his trailer brakes had caught fire at approximately 2:22 p.m.

According to responding ISP, Bennett pulled over to the shoulder of the road and tried putting the fire out. But after a few minutes, Bennett realized the fire was too big, so he separated the tractor from the trailer, police say.

Police say the trailer and all 40,000 pounds of its contents were destroyed, but Bennett was uninjured.

At approximately 2:38 p.m. at the 43-mile marker of the northbound lanes of I-65, a small traffic back-up had built up, and within that multi-vehicle accident.

Police reported that a 2005 Nissan Altima, driven by Richard Kermode, 48, Indianapolis, rear-ended a 2003 Mitsubishi Eclipse, driven by Mackenzie Pritchett, 19, Brownstown, which had slowed down to pass the semi fire. This accident caused a chain reaction with two other cars; a 2008 Hyundai Sonata driven by Dawn York, 38, of Kenosha, Wisc. and a Mercury Mariner, driven by June Beatty, 45, of Shepardsville, Ky.

Kermode’s Altima caught fire shortly after the accident, police say. Kermode was not injured, but ISP cited him for speeding to avoid a collision.

Pritchett, York and Beatty were treated for non-life-threatening injuries.