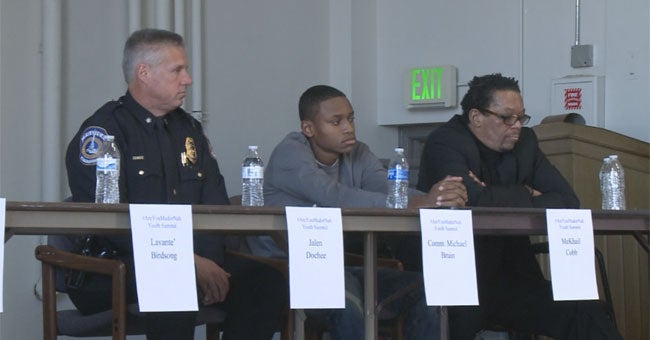 “It gives us more understanding of what’s going on, and how they look at us and how we look at them, so they know,” Mekhail Cobb, one of the teens who led the dialogue, said.

There was plenty of open dialogue about safety in a trusting setting between law enforcement, youth and their parents.

“Sometimes they don’t feel comfortable going to their parents or mothers and fathers, but when they’re around their peers, and their peers start opening up and talking, it gives them the opportunity to open up and dialogue too,” James Wilson, with Circle Up Indy, said.

IMPD Chief Rick Hite attended the meeting, and says he will start a monthly forum with teens from across the city to air out any differences and try to foster that trust these teens say they do not even have with their neighbors, let alone with law enforcement.

“If they’re one on one in the street, they ought to know that their dignity is not going to be impugned, no matter what you’ve done, we’re not going to take your dignity away and embarrass you on the street,” Hite said.

The youth say they want the police to hear them out, and to help keep them away from the influence of gangs and drugs.

“They do feel like no one cares about them, and so that’s when they get into other activity, because they don’t know anywhere else to go,” Arnetta Scruggs, with Bloom Project, Inc. said.

The teens say they are ready to lead and lift up their peers.