Trump suggests paying for US border wall with Pentagon funds 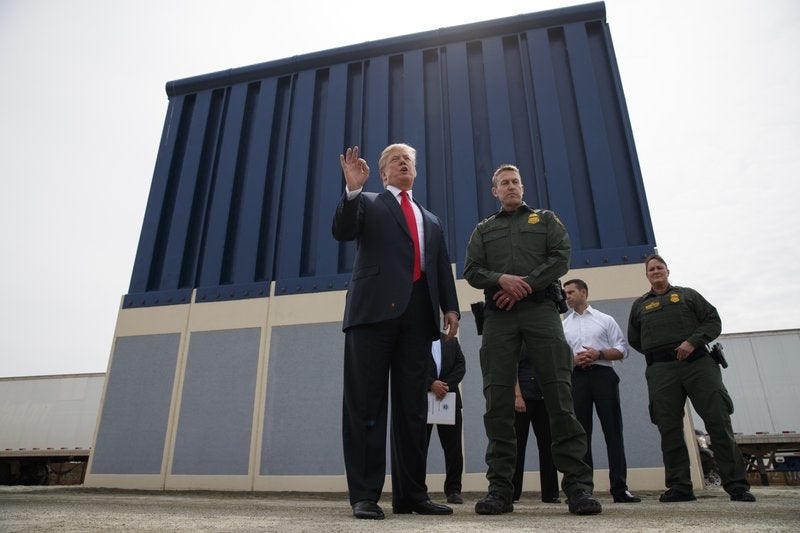 Still angry about the budget deal he signed last week, President Donald Trump has floated the idea of using the Pentagon budget to pay for his long-promised border wall with Mexico, despite the fact that such spending would likely require approval from Congress.

Trump raised the funding plan with House Speaker Paul Ryan at a meeting at the White House last Wednesday, according to a person familiar with the discussion who wasn’t authorized to speak publicly and spoke on condition of anonymity.

And he has tweeted that building “a great Border Wall” is “all about National Defense” and has called to “Build WALL through M!” — the military.

Departments, however, have limited authority to reprogram funds without congressional approval. Pentagon spokesman Chris Sherwood referred all questions on the wall to the White House, where spokeswoman Sarah Huckabee Sanders deflected them, saying she was “not going to get into the specifics of that.”

Trump threw Washington into a tizzy on Friday when he threatened to veto the omnibus spending bill, in part because it didn’t include the $25 billion he’d tried to secure for the wall in a last-minute bargaining spree.

The $1.3 trillion funding package did include $1.6 billion in border wall spending. But much of that money can only be used to repair existing segments, not build new sections. Congress also put restrictions on the types of barriers that can be built.

Trump has tried to justify signing the deal by pointing to the boost in funding it provides for the military. But he nonetheless remains frustrated, according to people familiar with his thinking who weren’t authorized to discuss private conversations and who spoke on condition of anonymity.

Trump first publicly floated the idea of having the Pentagon pay for the rest of construction in an obscure tweet that left many confused.

“Building a great Border Wall, with drugs (poison) and enemy combatants pouring into our Country, is all about National Defense,” he wrote Sunday. “Build WALL through M!”

Some people close to the president have also suggested creating a GoFundMe campaign that Trump could use to raise money from the public to fund construction. The White House did not immediately respond to questions about the idea, and it’s unclear whether it has gained any serious traction.

Congress, under the Constitution, has the power to determine federal appropriations, and the administration has little authority to shift funding without congressional approval. The Senate Appropriations Committee was not aware of any authority that would allow the Defense Department to fund the wall without congressional approval, said a GOP aide.

Sanders said Tuesday that Trump would work with the White House counsel to make sure any action taken was within his executive authority. And she insisted the “continuation of building the wall is ongoing and we’re going to continue moving forward in that process.”

Building the wall was one of Trump’s top campaign promises, and the idea that drew the loudest cheers from supporters at his rallies. Trump also insisted he’d make Mexico pay for the construction. But Mexico has made clear it has no intention of doing so.