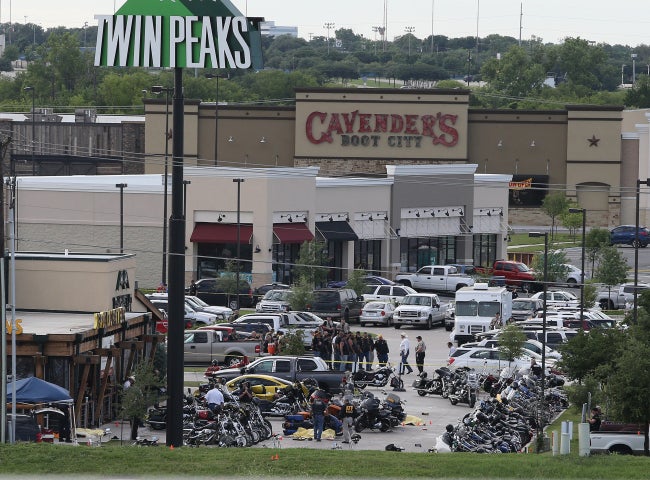 WACO, Texas (KXAN) – Less than a day after a deadly shootout between five biker gangs at a Twin Peaks in Waco, corporate officials for the chain restaurant say they are revoking its franchise agreement.

“We will not tolerate the actions of this relatively new franchisee and are revoking their franchise agreement immediately,” said Twin Peaks’ corporate officials in a statement. “Our sympathies continue to be with the families of those who died and are very thankful on employees, guests, police officers of bystanders were hurt or injured.”

Waco Police Sgt. W. Patrick Swanton says the shooting could have been prevented by restaurant management. The shooting left nine people dead and 18 others injured.- a shooting Swanton says is now considered a capital murder case “because of the number of people killed in one episode.”

At last count, Swanton says 170 people have been arrested and are in the process of being booked and charged with engaging in organized crime in connection to the shooting.

Swanton says the details of the charges are still being worked out, but everyone is in the process of being booked on charges of engaging in organized crime.

“What happened here today could have been avoided,” Swanton told the media during a news conference. He went on to say that police alerted the restaurant to the threat of violence and that the manager was asked to discontinue “bike night.”

Swanton says police presence has been at that Twin Peaks for about two months now, adding that this incident wasn’t the first Sunday that they’d been out there.

“They were aware that there were issues here. We have been working with management here – to no avail. And I have to say: That was local management here,” said Swanton. “We told them of the issues. We tried to get assistance from them in dealing with this crowd, but they would not cooperate … There was a statement that local management put out last night that was absolute fabrication. It was a lie.”

Jay Patel, operating partner of the Twin Peaks Waco franchise, offered up a statement on Facebook.

“We are horrified by the criminal, violent acts that occurred outside of our Waco restaurant today. We share in the community’s trauma. Our priority is to provide a safe and enjoyable environment for our customers and employees, and we consider the police our partners in doing so. Our management team has had ongoing and positive communications with the police, and we will continue to work with them as we all want to keep violent crime out of our businesses and community. We will continue to cooperate with the police as they investigate this terrible crime.”

“We feel like they could’ve done more. We feel like that they did not take our advice and try to keep the bike groups from being here,” said Swanton on Sunday after the shooting. “They absolutely have a right to refuse service to people that may be a harm to their patrons and employees. They didn’t do that, and today is the ultimate aftermath of what their decision was.”

Swanton says that the police department has had officers in plain clothes – in large numbers – at the restaurant for the past two months. He also said there have been several arrests stemming from incidents at Twin Peaks, most of them minor skirmishes, warrant arrests and arrests of that nature.

“As of about a week ago, we were in contact with the national management of Twin Peaks because we were getting no cooperation locally, and we were going to them for assistance,” said Swanton. “People have civil rights. Until a law is broken, there’s nothing we can do if we don’t have management to support – to assist us – in keeping individuals out of a business. There’s nothing we can do until a law is broken.”

No bystanders were hurt, despite another packed restaurant just 25 feet from the gun battle.

As bikers from across the state began to pour into town Sunday afternoon, Waco police decided to close the mall where the restaurant is located.

While five different gangs are believed to be involved in the fight, officers on scene said it appeared some of the gangs appeared to be in alliance with one another.

“We are in the people business, and the safety of the employees and guests in our restaurants is priority one. Unfortunately, the management team of the franchised restaurant in Waco chose to ignore the warnings and advice from both the police and our company, and did not uphold the high security standards we have in place to ensure everyone is safe at our restaurants. We will not tolerate the actions of this relatively new franchisee and are revoking their franchise agreement immediately. Our sympathies continue to be with the families of those who died and are very thankful on employees, guests, police officers of bystanders were hurt or injured.”

Under a Texas Alcoholic Beverage Commission mandate, the restaurant shut down its alcohol sales for the next seven days as the investigation continues into the shooting that left nine people dead and at least 18 people injured – an investigation that has included biker gang death threats made against uniformed officers. Still, Waco police is urging the restaurant to remain closed entirely – at least for the next week – out of respect for the incident.

“I can tell you that yesterday’s events started as bad guys on bad guys,” said Swanton. “When our officers got there and intervened in the active-shooter situation, those bad guys turned their hostility on our officers, which included Waco and DPS.”

Meanwhile, authorities continue to comb through evidence that spans a Central Texas shopping center, much of which is closed Monday morning due to the amount of evidence they have to go through. Some 50 weapons – including knives, brass knuckles, chains and clubs – have been recovered from the scene so far.

“These were bad-guy weapons. They ranged from brass knucks to knives to chains to clubs and to firearms,” said Swanton. “This was a true gang fight.”

It started with a fist fight in the bathroom of the restaurant near the intersection of Interstate 35 and State Highway 6 Sunday afternoon in Waco. It spilled into the bar, where it quickly escalated into knife fight – and then out into the parking lot where a gun battle raged between five different biker gangs and heavily armed police.

Eight people died at the scene, and another person died at the hospital. Most of the injured either had stab wounds or gunshot wounds – or both. Two people had to be take out of the Waco area because of the severity of the injuries, and most of the others injured were taken to Scott & White Baylor Hillcrest.

“They had a little bit of an issue there as well, with individuals showing up, being threatening to staff, demanding answers and had some problems there,” said Swanton of the hospital situation.

“In 34 years of law enforcement, this is the most violent crime scene I have ever been involved in,” Swanton said. “There is blood everywhere.”

The altercation between biker gangs began just as churchgoers arrived at the Central Texas Marketplace for Sunday Lunch.

In anticipation of any problems, Waco police were already on scene when the violence broke out. Officers say bikers were attacking one another with chains, knives, bats, clubs and firearms.

“These are officers that ran into gunfire to protect our citizens, and they – without a doubt – did a hell of a job doing that yesterday, and we’re very proud of them. And again, we think that saved numerous lives,” said Swanton. “We were quickly able to gain control because of the number of officers we had here on scene. And we began calling for additional resources due to the large number of people that were there and the threat to not only our officers, but the citizens as well.”

It is still unclear if those killed and injured were hit by police gunfire or gunfire from the bikers involved.

“What I want you all to understand: This is not a bunch of doctors and dentists and lawyers riding Harleys,” said Swanton on Sunday afternoon. “These are criminals on Harley-Davidsons that are members of a criminal biker gang, and we know who they are. We know which clubs that they’re with.”

Waco’s proximity to Austin and Dallas, by way of Interstate 35 and less-traveled highways, has made it a popular destination for bikers since the 1970s. The city has several biker bars on the outskirts bearing signs barring gang members from wearing “colors” inside.

Investigators in Waco say the gangs involved in Sunday’s violence were apparently in town in effort to recruit new members.

Austin Police Chief Art Acevedo is jumping into the conversation. He posted the following on Twitter Sunday night:

“Waco today was textbook example of societal problem & illustrates need to give law enforcement tools to keep guns out of the hands of criminals.”