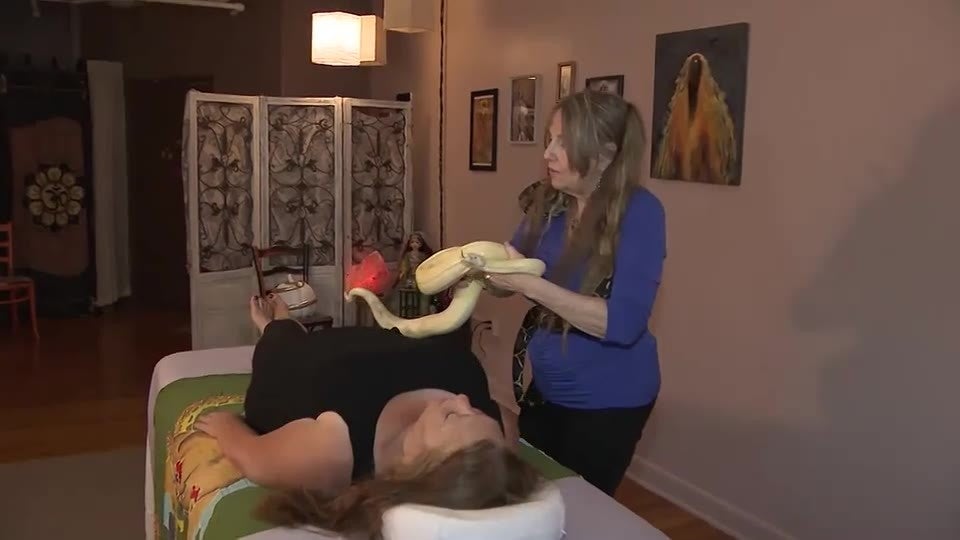 POUGHKEEPSIE, N.Y. (WFLA/CNN) – Getting over your fear of snakes might be as easy as going for a massage.

Boa constrictors, some longer than 6 feet, slither all over Pam Kelly’s body.

We witnessed her first snake massage with Serpentessa at Dreaming Goddess in Poughkeepsie, New York.

Psyche’s the chosen one, for now.

“Enjoy them and feel them on you,” Serpentessa said.

She can’t force them to do anything.

Each serpent chooses its own path — gliding over her, wrapping around her feet, her head, even resting on her neck.

“They tone and stimulate the vegas nerve in our body and that releases endorphins and oxytocin. Those are the feel-good hormones,” Serpentessa said.

This snake priestess said she has specialized as an interspecies facilitator over the past 25 years.

How safe is it?

“So you know, there are no guarantees with a wild animal. You are the one who’s going to choose if this is safe for you or not. So, no one has ever been hurt by one of my boa constrictors,” Serpentessa said.

She said she tells us people typically reach out to her for one of three reasons: healing, empowerment or to get over their fear of snakes.

In the end, she said her session helped.

“It was a lot calmer and peaceful than I thought it was going to be. There was as point it felt like they were just hugging me around the shoulders and then it just became very calm. I could’ve just fallen asleep,” Kelly said.

At this particular establishment, a snake massage, which runs an hour and 15 minutes, will cost you $300.