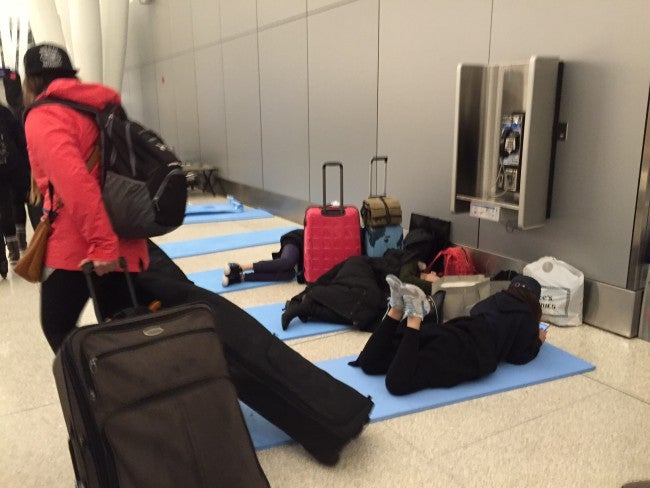 INDIANAPOLIS (WISH)  – Travelers continue struggling to get to their destination after Mother Nature threw a wrench in their plans. Monday’s storms continued to cancel or delay flights across the country.

Indianapolis International Airport has at times looked more like a hotel over the past 24 hours, leaving some people with an extended vacation they weren’t expecting.

Hundreds of stranded travelers had their choice of a yoga mat, cot, or finding enough space on a couch to kick up their feet and relax.

A few neighboring hotels reported seeing a rush of walk-in customers who had their flights canceled. The Ramada Indianapolis Airport Hotel told 24-Hour News 8 it had nearly three dozen customers who were stranded in Indy Monday night.

By Tuesday evening, the amount of stranded people dwindled, but finding them wasn’t difficult.

Defeated, deflated, and despaired; all of those words were written across Benicia Thompson’s face as she and her husband Kenny worked to get their family home to Arizona.

“We got in line, went up to the desk and she says ‘oh your flight just got canceled, we just got word,'” Thompson said. Their problems only continued as they tried to find a new flight.

“Online everything is sold out for the next two days,” Thompson complained. During our interview, Thompson got a call back from Southwest Airlines. She spent several minutes on hold, hoping they would have good news.

Anika Riar’s family has been to three airports in two days. Their vacation started in Costa Rica. They flew to Houston, Texas, were rerouted to Ft. Myers, Florida, then got sent to Indianapolis. Their home destination was Chicago, Illinois. She was also traveling with a group of 20 people.

“We were split into eight different flights because it’s such a huge group,” she said. Because of heavy snow in Chicago, Riar’s family couldn’t get a flight there for a few days. Instead, they decided to rent cars and make the drive from Indy. She said the most frustrating part of the ordeal is that their checked bags already made it to the Windy City without them.

“We’ve been without tooth brushes. Dirty clothes, somehow we all have dirty clothes so we haven’t changed in two days,” she said.

As for Thompson’s phone call, Southwest finally had an option she was willing to accept. They were able to secure a flight for her family of four on Saturday.

“We get to spend New Years in Indianapolis,” she said with a smile.

Luckily for her family, they’ve got relatives in town so there’s no need to get cozy at the airport like some people.

She said the most disappointing part is missing a few days of work, but at least the end to the troublesome trip is in sight.

“As long as we’re not paying for this flight, we’re getting a refunded something it’s all good,” Thompson said. She noted Southwest didn’t charge her for the new flight and also gave everyone in her family a voucher.

As of 10:30 Tuesday night, the airport’s website only listed one arriving flight as canceled. Nearly a dozen other arrivals were delayed anywhere from thirty minutes to a couple hours. All of the departures were listed as on time.