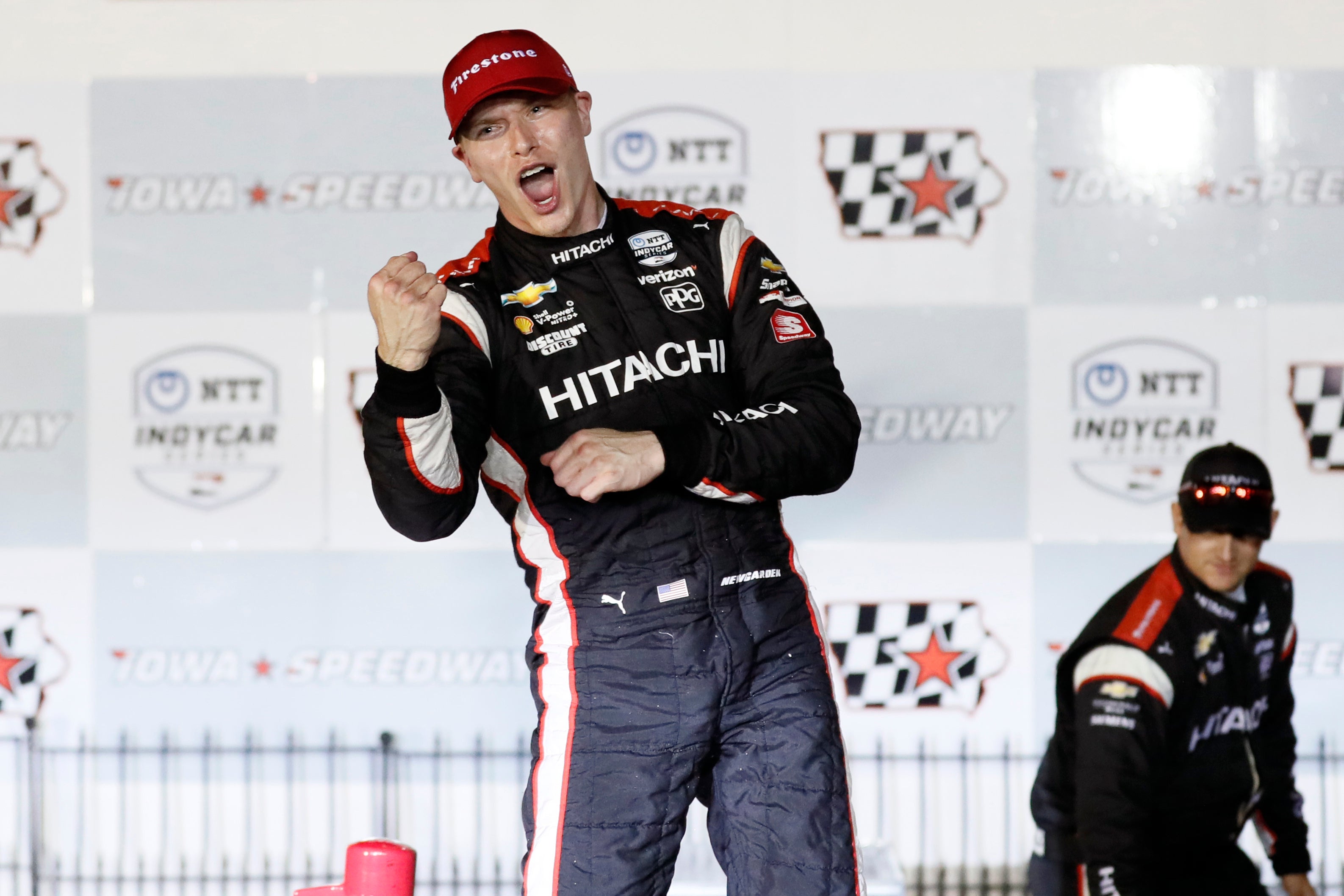 NEWTON, Iowa (AP) — With his championship lead in danger, Josef Newgarden strengthened his hold on the title chase with yet another blistering run in Iowa.

Josef Newgarden led 245 laps of 300 laps and won the weather-delayed IndyCar race early Sunday at the Iowa Speedway, his fourth victory of the season.

Newgarden also pushed his lead over Alexander Rossi from four to 29 points with five laps left.

Five-time champion Scott Dixon gave Newgarden a push after benefiting from a late caution and rallied to finish second. Dixon was joined on the podium by James Hinchcliffe, who won in Iowa a year ago.

Simon Pagenaud was fourth, followed by Spencer Pigot and Rossi.

The affable Newgarden was a bit testy after Friday’s qualifying — despite earning the third spot on the grid — because he knew how fast his No. 2 Chevrolet could be.

Newgarden went out and proved it on Saturday.

Newgarden pushed past teammate Will Power just ahead of a 25-minute red flag for rain. Newgarden was never seriously threatened after that, and when his team nailed Newgarden’s final pit stop with just under 50 laps left the race was all but over — save for Dixon’s

“I was a little down (Friday). I thought we had the pole car, and we didn’t get it right,” Newgarden said. “I was so focused on making sure we got it right.

Dixon might be a longshot for a sixth title, but he showed yet again why he’s one of the best drivers has ever seen by reaching the podium with a car he seemingly fought all night.

Dixon, who at one point was in 16th place and a lap down, stayed out on a late caution and got within three seconds of Newgarden down the stretch.

“Holy smokes. We were in second. I thought we were in 22nd,” Dixon said. “It’s a huge credit to the team. They definitely pulled one out there.”

The skies opened up about an hour before the scheduled green flag, and heavy rain and lightning pelted the track for over an hour. It continued to drizzle after two weather cells moved through though, along with consistent cracks of lightning in the area. The speedway used Air Titans to dry the oval, but track officials struggled to eliminate spots where water seeped through the pavement. The green flag finally dropped at 10:45 local time — only for a red flag to be called 56 laps in for more rain.

Sebastian Bourdais, a four-time CART champion, finished ninth in his 200th start. Bourdais is winless this season, but he won at least once in each of the previous five years.

Marco Andretti was asked to pit by IndyCar for not meeting the minimum speed midway through the race. Andretti, who hasn’t won since taking Iowa eight years ago, retired after 205 laps. Sage Karam and Takuma Sato, who got collected in the final third of the race in an incident that cost Karam a drive-through penalty, also left the race early.