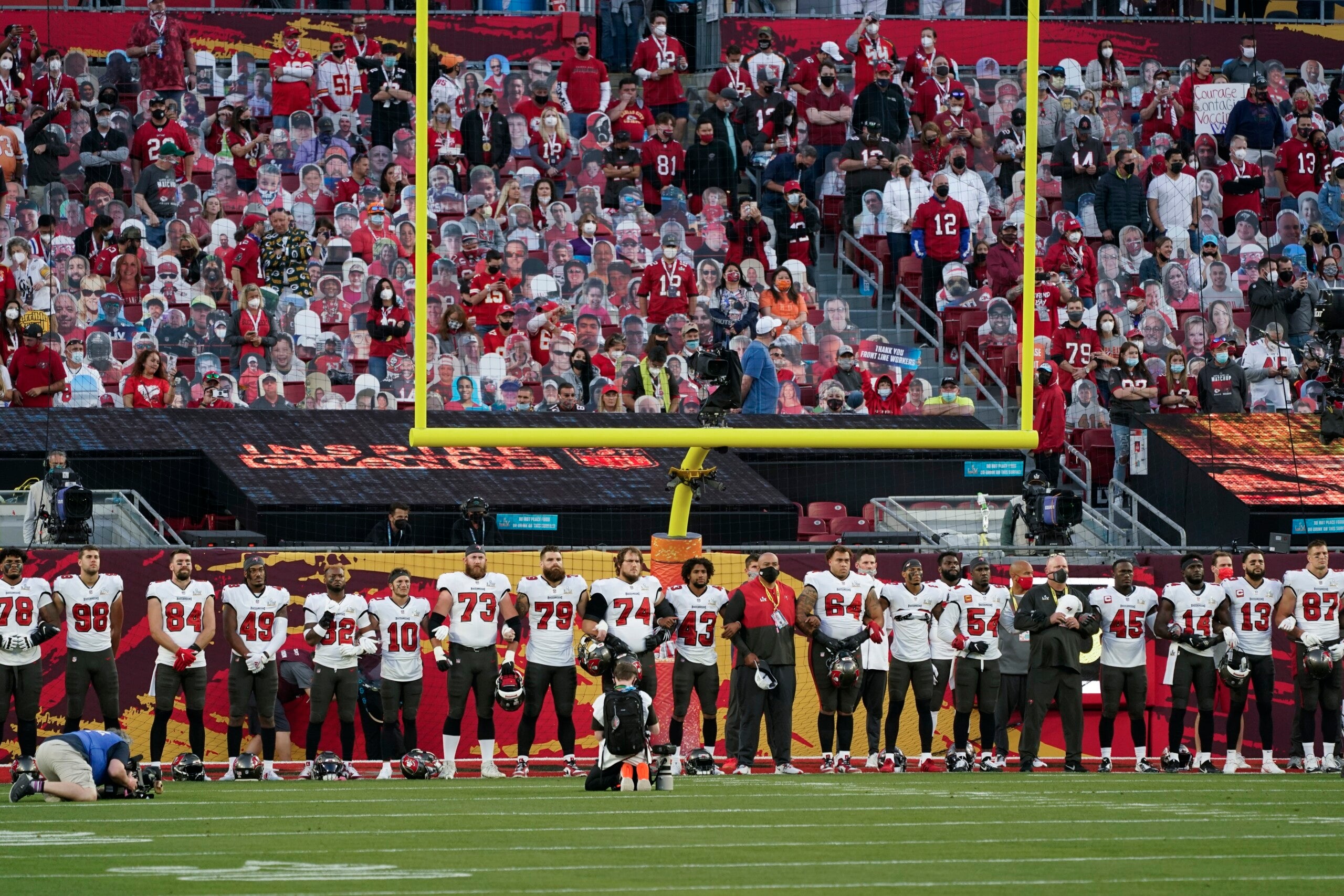 The Latest on Super Bowl 55 (All times EST):

Tom Brady threw two of his three touchdown passes to Rob Gronkowski and the Tampa Bay defense frustrated Patrick Mahomes to lead the Buccaneers to an 31-9 victory over the Kansas City Chiefs on Sunday night for Brady’s record seventh Super Bowl title.

Brady connected twice in the first half with Gronkowski to give the pair an NFL record 14 playoff TD passes and then added another to Antonio Brown to stake the Bucs to a big halftime lead that the defense had no problem holding.

Mahomes was unable to get the Chiefs into the end zone for the first time in his career. He went 26 for 49 for 270 yards and two interceptions.

Brady won it all in his first season in Tampa Bay after winning six Super Bowls with New England. The Bucs got their second championship following the one in the 2002 season.

An unknown man slipped onto the field at the Super Bowl and ran toward midfield, drawing applause from the 25,000 fans in attendance.

The man took off his shirt, waved it above his head and kept running. He slipped between two security guards and then made a beeline for the goal line.

With more security closing in, he wisely slid at the 3-yard line. But he wasn’t afforded the same protection as NFL quarterbacks. Guards piled atop him as he hit the grass, tied his hands and escorted him into a nearby tunnel. He got another ovation as he exited the stadium.

The Chiefs trailed 31-9 and managed just three field goals at the time of the streaker’s appearance.

Tom Brady and Tyrann Mathieu have been going at it all game in Super Bowl 55.

The Buccaneers quarterback and Chiefs defensive back began jawing early in the first half after Mathieu’s interception was negated by a Kansas City penalty.

Mathieu was whistled for a pass interference in the closing seconds of the first half. The penalty set up Antonio Brown’s 1-yard touchdown catch that gave Tampa Bay a 21-6 halftime lead over the defending champions.

After that score Mathieu and Brady jawed at each other and Mathieu was whistled for unsportsmanlike conduct. Defensive coordinator Steve Spagnuolo walked over to an irate Mathieu on the bench and spoke to the safety briefly.

Two series later, the Chiefs had an interception by Tyrann Mathieu wiped out by Chavarius Ward’s holding penalty. When they held the Buccaneers to a field goal, Antonio Hamilton and Mecole Hardman were lined up offsides, giving Tampa Bay a fresh set of down. Brady again finished the drive with a TD pass to Gronkowski.

Finally, Breeland put an exclamation mark on his dreadful half when got called for pass interference on Mike Evans, who had beaten him deep in the final minute.

When Mathieu got called for interfering with Evans in the end zone, Brady hit Antonio Brown on the next play with 6 seconds left to give Tampa Bay a 21-6 lead at halftime.

Tom Brady and Rob Gronkowski have connected on another TD pass.

Brady’s second touchdown pass to Gronkowski in the first half gave the Tampa Bay Buccaneers a 14-3 lead over the Kansas City Chiefs in the second quarter of the Super Bowl.

The two combined on their 13th career playoff touchdown in the first quarter that broke the record for most playoff TD passes for a duo that had been held by Joe Montana and Jerry Rice.

The latest TD came after a potential interception was wiped out by a holding call on Charvarius Ward. The drive was extended again when Antonio Hamilton lined up offside on a field goal. Brady threw the TD pass on the next play.

Patrick Mahomes and the Kansas City Chiefs are off to a slow start in the Super Bowl.

Mahomes is 3 for 12 for 23 yards through the first four drives against the Tampa Bay Buccaneers. It’s the fewest yards he’s ever had after four drives in a game. His previous low was 23 against the Chargers on Nov. 18, 2019.

The Chiefs have punted three times and scored one field goal and trail the Bucs 7-3.

Mahomes hasn’t gotten a lot of help from his receivers with Travis Kelce dropping a third-down pass to end Kansas City’s fourth drive.

Punter Tommy Townsend is off to a rough start as well. He has punts of 27, 29 and 51 yards. His 51-yarder bounced into the end zone for a touchback. Townsend had just one punt in the Chiefs’ first two playoff games.

The Kansas City Chiefs’ goal-line stand has kept the Tampa Bay Buccaneers from adding to their 7-3 lead in Super Bowl 55.

Running back Ronald Jones II was stuffed on fourth-and-goal from the 1-yard line.

That’s just the third time a team went for it on fourth down from the 1 in the last 21 Super Bowls. The Eagles converted on Philly Special three years ago and the Saints were stuffed by the Colts on a Pierre Thomas run 11 years ago.

Tom Brady took a lead heading into the second quarter for the first time in his 10 career Super Bowls thanks to an 8-yard touchdown toss to Rob Gronkowski with 37 seconds left in the first quarter.

Tom Brady has his first touchdown pass in the first quarter in his 10 career Super Bowls.

Brady hooked up with former Patriots teammate Rob Gronkowski for an 8-yard touchdown to put Tampa Bay up 7-3 over the Kansas City Chiefs with 37 seconds left in the first quarter.

It was the 13th time Brady and Gronk have hooked up for a postseason touchdown. That breaks the record they shared with Jerry Rice and Joe Montana.

Brady’s nine Super Bowl teams in New England produced just three points total in the first quarter. That came on a field goal in the Patriots’ 41-33 loss to the Eagles in Super Bowl 52.

The Buccaneers punted on their first two possessions before Brady engineered an eight-play, 75-yard drive.

The Kansas City Chiefs have scored first in the Super Bowl.

Harrison Butker kicked a 49-yard field goal on Kansas City’s second drive to give the Chiefs a 3-0 lead over Tampa Bay.

Patrick Mahomes missed a deep pass to Tyreek Hill on third down to lead to the kick. Mahomes is just 1 for 6 for 3 yards early in the game. He has rushed for 24 yards and two first downs for the most yards rushing for a QB in the first quarter of the Super Bowl since Steve Young had 36 for the 49ers 26 years ago.

The Buccaneers punted on their first two possessions. Quarterback Tom Brady has led only one scoring drive in 19 attempts in the first quarter of his 10 career Super Bowls.

Gorman, who graduated from Harvard University last year, captivated Americans with the recent recitation of her poem on national unity at President Joe Biden’s inauguration.

Afterward, the NFL invited the 22-year-old poet laureate to participate in the pregame pageantry at the NFL championship.

The poem preceded the pregame coin flip won by the Kansas City Chiefs, who kicked off to the Tampa Bay Buccaneers.

The Super Bowl has kicked off with Tom Brady and the Tampa Bay Buccaneers getting the first possession.

The Chiefs won the coin toss and deferred to the second half.

Brady is hoping to accomplish one of the few things he hasn’t done in nine previous Super Bowl trips by scoring a TD in the first quarter.

In 17 drives that started and ended in the opening quarter in those games, he led New England to only one field goal, although he did score an opening drive TD in the opening minute of the second quarter in Super Bowl 42 against the Giants.

The quarterback matchup between Brady and Patrick Mahomes is the sixth ever in the Super Bowl between former AP MVPs, the second between former Super Bowl MVPs and the first between players who had previously won both awards.

Pregame festivities for the Super Bowl have started with a video recording of “Lift Every Voice and Sing” as players from Tampa Bay and Kansas City lined up on each goal line.

The NFL opened the season with the same show of racial solidarity and did it again before the final game. Both teams went to their locker rooms after the rendition by Alicia Keys.

The league chose “Lift Every Voice and Sing” as an addition to the national anthem for opening weekend and for the Super Bowl after a national reckoning over race sparked by the death of George Floyd at the hands of police in Minneapolis.

The NFL is providing masks to all fans and following many of the guidelines used during the regular season in stadiums that allowed fans.

Purchases are cashless, and the first rows of fans are not close to the field. The rows closest to the field in Tampa Bay’s home stadium are covered. The Buccaneers are the first team to play the Super Bowl at home. Raymond James Stadium normally holds about 75,000 fans.

Locker room access is limited compared to previous Super Bowls, and Super Bowl week was much different. Most events were virtual, and Kansas City didn’t travel until the day before the game. Teams traditionally arrive about a week early.

President Joe Biden says it’s his “hope and expectation” that next year’s Super Bowl can be played in front of a fan-filled stadium.

Biden says the NFL title game is “just one of those great American celebrations” and laments “all those house parties, all those things that aren’t happening” because of the coronavirus.

He tells CBS News in an interview aired during the pregame show that, with God’s help, fans can celebrate the game “as usual a year from now.”

The NFL is allowing 25,000 fans in Tampa Bay’s home stadium for the matchup with Kansas City. The crowd is expected to include 7,500 vaccinated health care workers.

Biden declined to pick sides between the Chiefs and the but says Patrick Mahomes and Tom Brady are both “great quarterbacks.”

He says “one is just a younger version, potentially, of an old, great quarterback. Not old. In NFL terms, old.”

Super Bowl 55 pits two of the oldest head coaches in the NFL in an age when young offensive-minded coaches are all the rage.

Lombardi was 54 when his Packers won Super Bowl II over the Oakland Raiders.

Buccaneers coach Bruce Arians is 68. A victory over the Chiefs would make him the oldest to win a Super Bowl.

Bill Belichick was 66 when he won Super Bowl 53 with New England two years ago.

President Joe Biden says his administration intends to take up the NFL on its offer to use all of the league’s stadiums as COVID-19 vaccination sites.

Biden mentioned the offer that came from Commissioner Roger Goodell in a letter this past week during an interview on CBS’ Super Bowl pregame show.

Seven NFL stadiums are already being used as vaccination sites. Goodell’s offer extends to the rest of them.

Biden says “absolutely we will” when asked if the federal government intended to use all the stadiums to try to ramp up distribution of vaccines. Biden says, “I’m going to tell my team they’re available and I believe we’ll use them.”

Tom Brady is looking to extend his record with a seventh Super Bowl title while Patrick Mahomes goes for the repeat and his second crown when Tampa Bay becomes the first team to play the big game on its home field against Kansas City.

The meeting between the two superstars is the largest age differential among starting quarterbacks in Super Bowl history at 18 years, 45 days. Tampa Bay’s Brady is 43, and KC’s Mahomes is 25.

Brady, who has said he might play past 45, is only seven years younger than Mahomes’ dad, 50-year-old former major league pitcher Pat Mahomes.