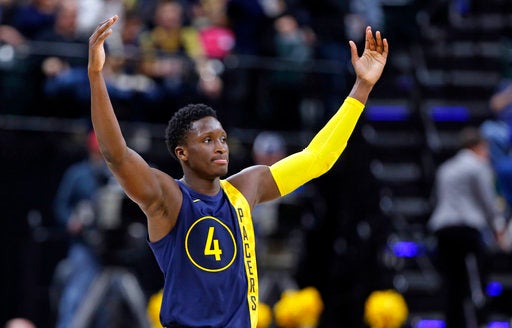 INDIANAPOLIS (WISH) — Victor Oladipo ripped off his rear view mirror over the break. For six hours a day it was a gym, a ball and a two-time All-Star trying to regain his groove.

Sure, there was a day or two off. But, most importantly there is a new message.

News 8’s Charlie Clifford asked Oladipo Wednesday whether he thought this was the best “team” during his Pacers tenure. The response turned into what felt like a well-timed pump-up speech for the final 27 games of the regular season — and more importantly — the 2020 NBA playoffs.

“I base it (team success) off the level of winning,” Oladipo said. “My first year here, we won at a high level. Unfortunately, we lost in the 7th game of series one. That team ended up winning the East. The other year, unfortunately I got hurt. We got swept. Getting swept out of the first round is just unacceptable for us. I mean, we have been doing it for what? Three years now? Come on guys. It is time to grow up, it is time to reach other goals. I know I don’t want to be remembered as the team that gets swept in the first round ever year, or loses in the first round every year. I’ll judge us later. But, when it is all said and done…then we will see. But, right now, I can’t say.”

If that isn’t a mission statement for the remainder of the 2019-2020, I don’t think we will be getting one.

The latest updates on Oladipo’s end include the repeal of his minutes restriction for the remainder of the season and confirmation that playing in back-to-back games is still off the table.

“Our goal is to try and get up the standings and get home court advantage,” McMillan said. “We are 3.5 games out of that fourth spot (entering play Friday in New York).”

15 different starting lineups to this point this season. Using only one the rest of the way is a good place to start.