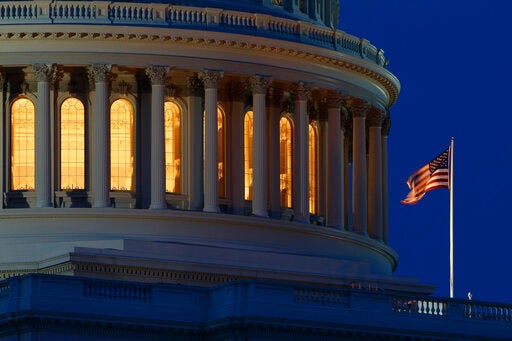 “The time for turning a blind eye is over!” New York Sen. Kirsten Gillibrand exclaimed.

“Don’t tell me that this issue is controversial,” Connecticut Sen. Chris Murphy added.

On Tuesday, Murphy led a group of more than 20 Democratic lawmakers in a marathon of Senate floor speeches demanding that Republicans allow a vote on a bill to close loopholes in the federal gun background check law.

“Leader McConnell—put H.R.8 up for a vote on the floor of the Senate,” Senate Democratic Leader Chuck Schumer demanded.

H.R.8 is the universal background check bill that passed the House back in February.

Massachusetts Sen. Edward Markey urged Republicans to break from the National Rifle Association (NRA) and allow the Senate to vote on the measure.

“Forget the money from the NRA. Forget all of its spending,” Markey said. “Let us not put a price on the lives of 34,000 Americans who died just last year.”

But Republicans maintain they’re waiting on guidance from Trump about what kind of proposal he would support.

“One of the things Mitch McConnell has made clear is that if the president is going to veto something, we’re not going to take it up on the Senate floor,” Ohio Sen. Rob Portman said.

Republicans say they hope to get that guidance from the White House in the coming days.