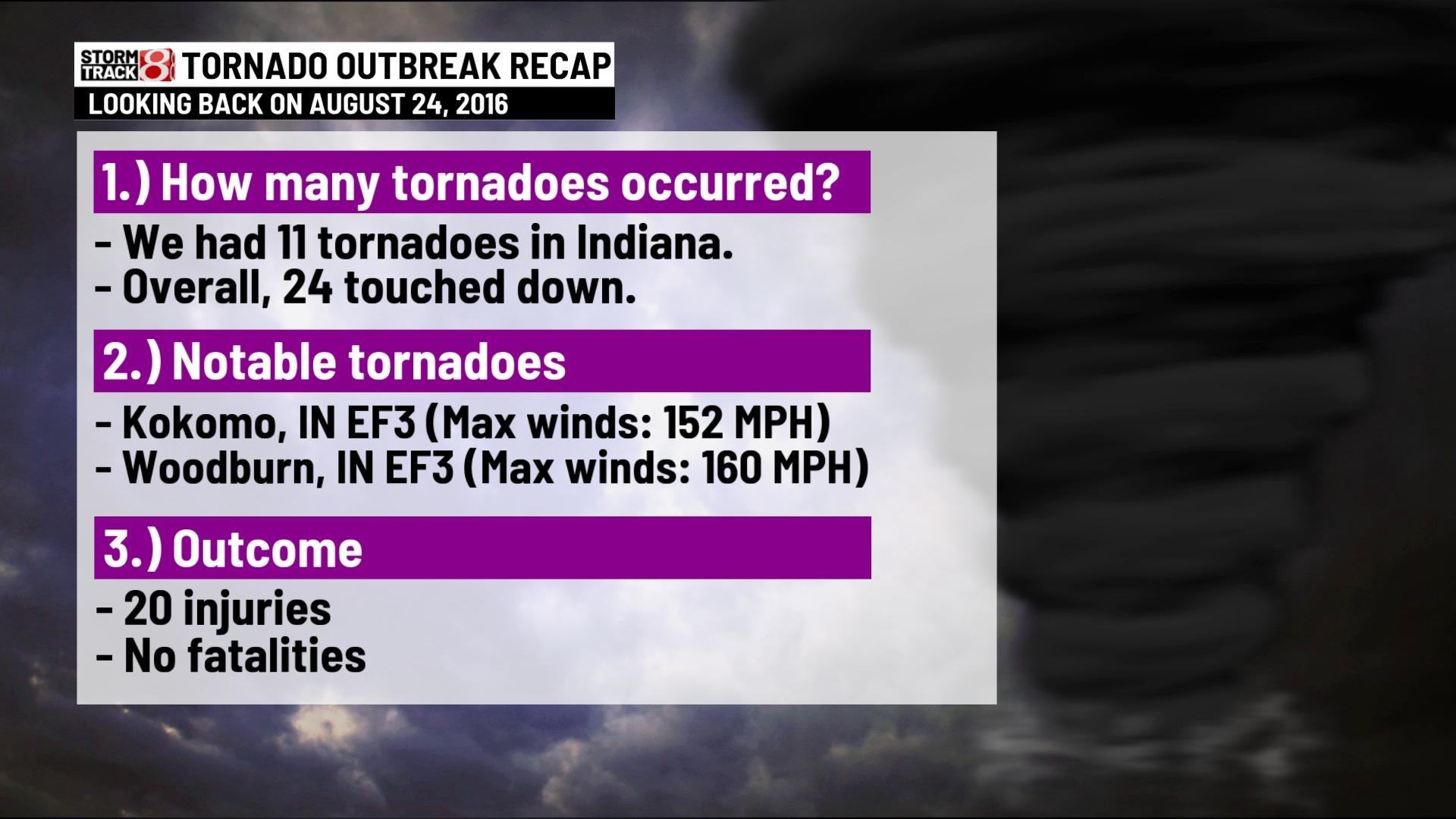 INDIANAPOLIS (WISH) — Five years ago, a tornado outbreak unfolded in portions of Indiana and Ohio on a day that at first didn’t yield any alarming signs of tornado development.

It became the largest tornado outbreak on record of any August in Indiana.

Aug. 24, 2016, started off on more of a typical note for a summer day. Cloudy skies and muggy air were locked into place across central and northern Indiana. No one was thinking about a tornado outbreak being on the horizon as conditions did not initially appear favorable for very active weather.

However, as the day progressed on, the high amounts of moisture in place began to outweigh the effects of the cloud cover. This in turn built unstable air needed for stronger storms to form. As this happened, increasing winds aloft swung in from Illinois. With a cold front in place to trigger storms, the atmosphere was now primed for multiple tornadoes. The first tornado of the day, rated with winds from 115-135 mph, hit south of Crawfordsville shortly after 2:30 p.m. EDT.

At 3:20 p.m. EDT, an intense tornado touched down and proceeded to rip through the south side of Kokomo. For many, the most memorable moment of the day would be when photos showed the damaged Starbucks in Kokomo. About 1,000 homes suffered damage on the south side of town. Later rated with winds from 136-165 mph, it ended up being the strongest tornado in Kokomo since April 11, 1965, when a violent tornado devastated the area.

By 4 p.m. EDT, part of Indianapolis was put under a tornado warning, and a weak tornado with winds of 85 mph or less touched down in the Brightwood neighborhood on the near east side. Another dangerous tornado, rated with winds from 136-165 mph, hit shortly before 5:30 p.m. EDT just east of Fort Wayne; heavy damage occurred in Woodburn.

By the end of the day, 24 tornadoes had formed across Indiana, Ohio, and Ontario, Canada, over a period of 6½ hours. Of the 24 tornadoes, 11 of them struck Indiana.

Despite the unexpected nature of the outbreak and the damage it wrought, only 20 people were hurt and no one died.