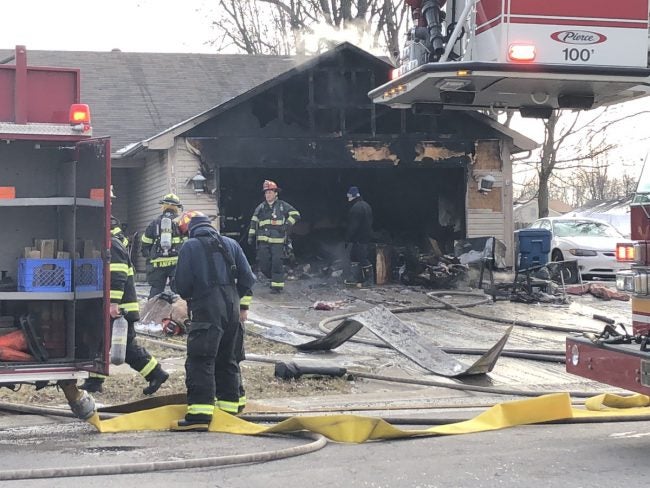 INDIANAPOLIS (WISH) – A 63-year-old man was injured in a house fire on the city’s east side.

Just before 9 a.m. Thursday morning, crews were called to a residence in the 1000 block of Winding Hart Drive.

According to the Indianapolis Fire Department, crews arriving on scene witnessed a fully engulfed garage. Also, a 63-year-old man was discovered laying in the front of the house with serious injuries to his feet.

IFD: A man in his 60’s has serious injuries from this house fire near 10th & Cumberland. He was laying in the driveway when fire crews arrived & taken to the hospital with serious injuries. IFD wasn’t able to confirm what IMPD told me that a random Good Samaritan helped the man. pic.twitter.com/w8fYTZgAws– Kevin Ratermann (@Kevin_Ratermann) February 8, 2018

The Indianapolis Metropolitan Police Department, who were also called to the scene, says they a woman may have helped pull the man from the burning structure.

IMPD: 1 male was pulled out of this burnt garage by a random Good Samaritan. The lady pulled him out, told officers she had kids in the car and then left. Victim has bad burns to his feet, but was awake & breathing when taken to the hospital. #NewsTracker #Daybreak8 pic.twitter.com/QPEaOAcJbf– Kevin Ratermann (@Kevin_Ratermann) February 8, 2018

The man who was transported to the hospital, awake and breathing, suffered serious burns to his feet.

No firefighters were injured and two dogs were also rescued and unharmed.