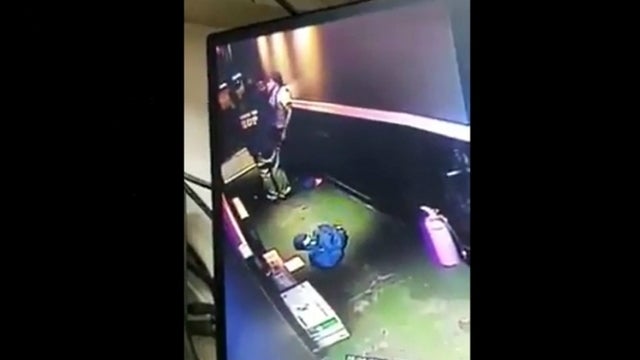 GRAND RAPIDS, Mich. (WOOD) — The downtown Grand Rapids Buffalo Wild Wings has fired a manager who was caught on camera choking a man at the restaurant.

Surveillance video of the incident, bearing a date stamp of Sept. 6, surfaced on social media over the weekend. The video, which does not contain audio of the incident, appears to show two employees talking to a man before one of them suddenly grabs him by the neck. After about 15 seconds, the man being choked falls to the ground before the employees involved drag his limp body out of the camera’s view.

The employee who choked the man was identified by company officials as a manager at the restaurant.

In a phone interview Monday evening, Lanfear said the man who was choked had come into the restaurant and was “very drunk.” She said he went behind the bar and was “creating chaos” in the establishment.

Nonetheless, she said, the manager’s response was inappropriate. She said company officials are looking to speak with the man who was choked.

Lanfear declined to comment on whether the company has been in contact with police. She said the investigation into what happened continues.

“There’s been a history of incidents in the company and nothing’s been done so far,” Herrick wrote WISH-TV’s sister station WOOD.

The video included in the middle of this article was recorded from Facebook and edited to remove the audio due to some profanity.