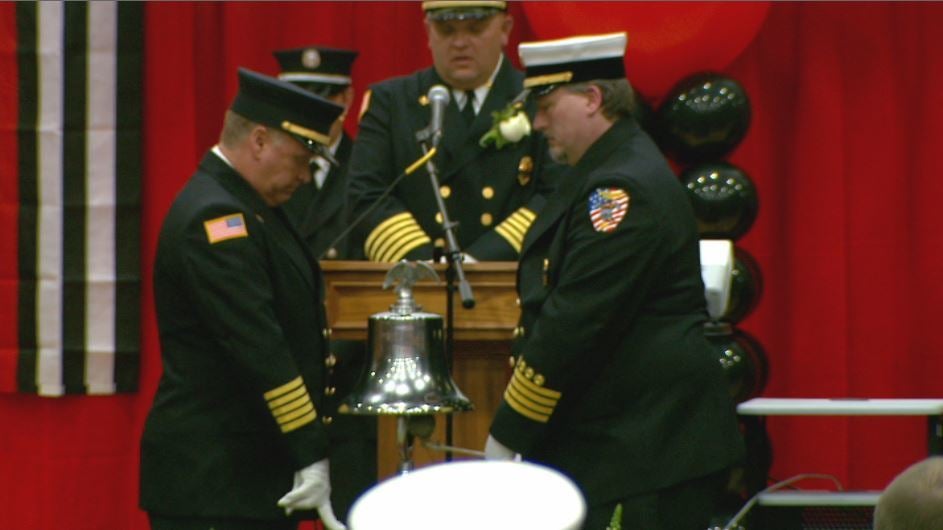 Pipe Creek Township volunteer firefighters Kyle Hibst and David Wittkamper were honored Wednesday with a fireman’s funeral ceremony and a procession with more than 110 vehicles in Elwood.

The two 31-year-old men took off in a private plane April 2 and shortly thereafter crashed into the tail of another small plane attempting to land at the Marion Municipal Airport. Hibst was the pilot, and both were killed in the accident.

Around 500 family, friends and public servants gathered Wednesday inside the Elwood Junior-Senior High School gymnasium to pay their respects to their fallen friends.

“David was in many ways the man we aspire to be. He was athletic, he was brave, he was daring, but on the other hand he was generous, he was kind and he was caring,” said the Rev. Josh Crockett from Grace Baptist Church. David’s father “says, ‘I couldn’t ask for a better son. He was the man every dad wants his son to grow up to be.'”

Kyle “got his pilot’s license before he got his driver’s license,” the Rev. Kal Rissman from St. John Lutheran Church said and laughed. “So, I wonder if you went on a date with Kyle and you said, ‘What are you going to pick you up in?’ and he would say, ‘A Cessna,’ how would that go? But he was able to do that because Kyle was a worker.”

Their fire chief remembered the two friends as great leaders and essential assets in the department.

“The loss that the township has suffered with the loss of these two individuals is the greatest loss in township history,” Chief Richard Shepherd said. “We lost two of the greatest firefighters and individuals I’ve ever had the privilege to lead.”

Fire and emergency response departments from at least seven area counties attended the funeral, along with dozens of area law enforcement agencies from across Indiana. Shepherd noted he’d been contacted by departments outside of the state as well.

“I received a call the other day from California and actually I thought it was a telemarketer,” he said, “but actually it was a fire department offering their condolences.”

Both men were married, and Kyle Hibst left behind a young son. As part of the funeral, their widows were presented with American flags and Indiana state flags. The Fireman’s Bell also rang out nine times each for the two fallen fireman. The fire department also during the funeral broadcasted a final radio dispatch call that stated the two firemen had answered their last call and were resting at quarters.

“Firefighters Hibst and Wittkamper, you may rest now. Your brothers and sisters will carry on from here,” said the radio dispatcher.

Directly after the funeral, caskets were carefully loaded onto two fire engines and passed rows of Elwood Junior-Senior high schoolers who lined the street in front of the school in support.

“When something like this happens, you have an entire high school of kids standing out on the side of the road to honor two amazing people who really deserve the credit they’re receiving today,” said Morgan Johns, who attended the funeral.

“I think as a community, it gives us a sense of pride of who we are that isn’t always apparent to some of the kids who grew up in a small town,” said Karen Tunis while observing the high school students. “They can realize there’s something really special about this little town.”

Tunis said she did not know either firefighter personally, but felt a need to attend their funeral.

“I’m just here to support our fire department,” she said. “We live in the Pipe Creek area. This department is our first responders.”

She and Johns agreed the silver lining in the tragedy of the loss of two public servants is the community show of support that powerfully follows.

“There’s something pretty special about the little town and the camaraderie, the community, the family feeling we have,” Tunis said.

Johns added, “Things like today really show people that we are this really, really great community to come together, and we honor the people that we love, and we take care of all of our citizens.”

The funeral procession traced a path through Elwood, pausing for a moment of silence outside the Pipe Creek Township Fire Department. Community members lined the procession route with hands on hearts or at attention as the emergency vehicles passed.