Coronavirus cases spike across country, with Florida showing signs of the next epicenter 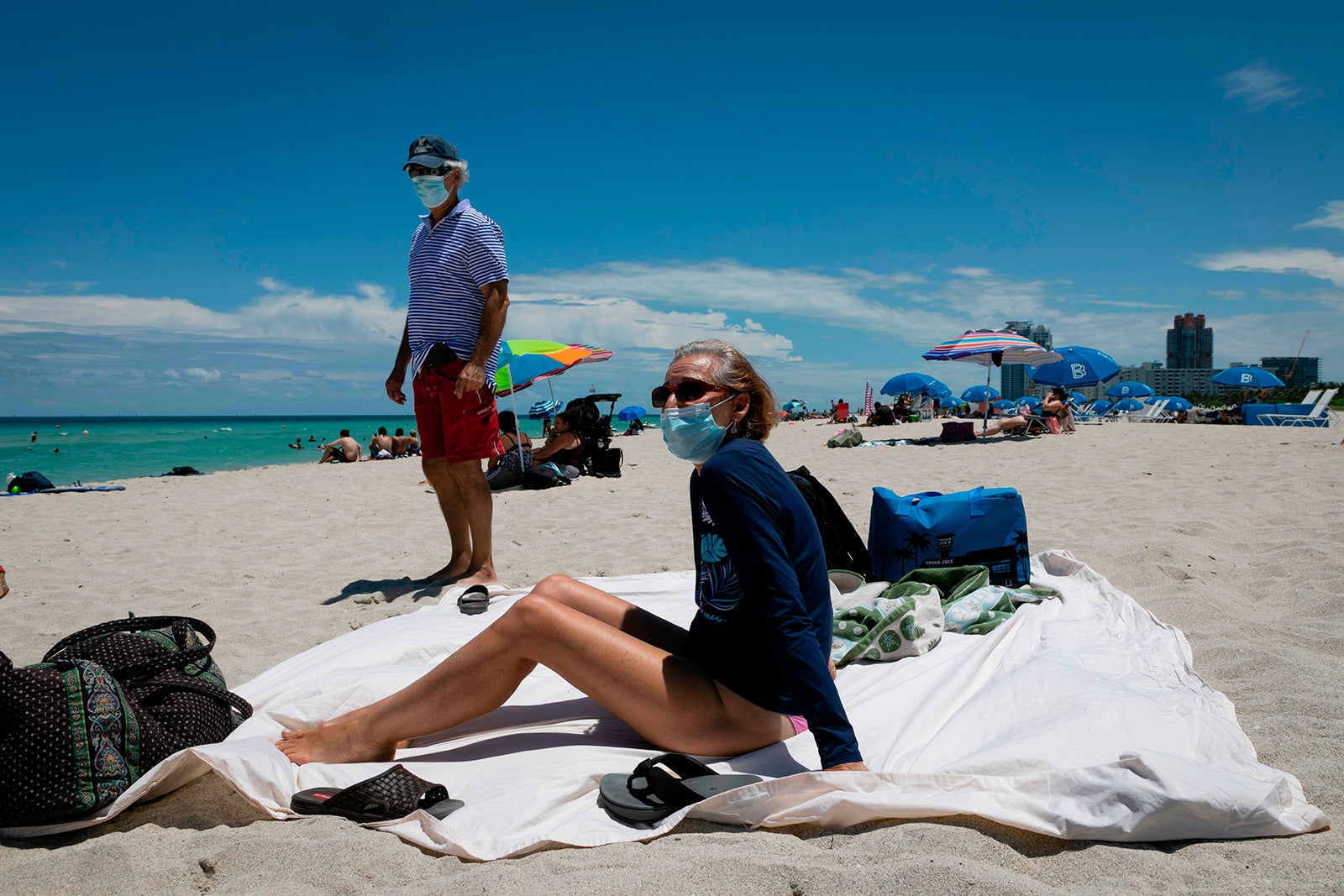 (CNN) — Ten states saw a record number of new Covid-19 cases this week, and one of them could be the next epicenter of the pandemic.

Florida reported 3,207 additional coronavirus cases on Thursday — the largest single-day count in the state since the pandemic, according to the Florida Department of Health. Florida’s total reported cases climbed to nearly 86,000, according to data.

The Sunshine State has “all the markings of the next large epicenter of coronavirus transmission,” and risks being the “worst it has ever been,” according to Wednesday’s projections from a model by scientists at Children’s Hospital of Philadelphia and the University of Pennsylvania.

“The potential for the virus to take off there is very, very nerve-racking and could have catastrophic consequences” because of the state’s aging population and the prevalence of nursing homes and retirement communities, Dr. Jeanne Marrazzo, director of the division of infectious diseases at the University of Alabama at Birmingham, told CNN on Thursday.

More than three quarters of Florida’s adult intensive care unit beds are occupied, according to data from the Florida Agency for Health Care Administration. General hospital beds were at nearly 75% capacity across the state.

St. Petersburg Mayor Rick Kriseman is requiring all workers at businesses who come face-to-face with customers to wear masks. “Certainly as we reopened, we did expect to see an increase but not like this,” he told CNN on Thursday.

“There are all kinds of alarm bells that are going off for me. I’m not comfortable with what I see happening in my community and that’s really the reason I took the actions I took. I think you’re going to see mayors across the state of Florida that are going to take actions in response to these numbers because we’re just not seeing that from our leadership in Tallahassee.”

Police officers in Miami-Dade County, for instance, were being dispatched to stores, beaches and parks to enforce social distancing and mask wearing.

In Arizona, health officials on Thursday reported a new single-day high for coronavirus cases for the second time in this week, with 2,519 new cases.

“What we’re looking at is the reality that we’re going to have rolling outbreaks,” Dr. Scott Gottlieb, former commissioner of the US Food and Drug Administration, said on MSNBC’s “Morning Joe” on Thursday. “There’s going to be parts of the country that get hot where there’s a lot of infection.”

Gottlieb said “more complacency” in Southern and Southwestern states not initially hit hard by the virus has led to “full-blown outbreaks.”

Twenty-three states are seeing an upward trend in new coronavirus cases, and health experts continue to stress the importance of taking precautions to reduce the virus’s spread.

Despite the rising number of cases, the White House has downplayed the risks, with President Donald Trump saying Wednesday in an interview with Gray TV that the virus is “dying out.”

With the White House narrative at odds with the data, health experts including Dr. Deborah Birx and Dr. Anthony Fauci have been absent from many public updates. Dr. Jonathan Reiner, a professor of medicine at George Washington University, told CNN it’s because “they tell the truth.”

“And the truth is that the pandemic is still very, very active in the United States and that we’re not getting back to normal and there are difficult things that the public has to do,” Reiner said.

Fauci warned about an “anti-science bias” contributing to case spikes in the country.

“One of the problems we face in the United States is that unfortunately, there is a combination of an anti-science bias that people are — for reasons that sometimes are, you know, inconceivable and not understandable — they just don’t believe science and they don’t believe authority,” Fauci said in an episode of the US Department of Health and Human Services’ podcast “Learning Curve” on Wednesday.

“So when they see someone up in the White House, which has an air of authority to it, who’s talking about science, that there are some people who just don’t believe that — and that’s unfortunate because, you know, science is truth.”

States reporting spikes in new cases will have to re-implement “significant levels of social distancing” to contain the spread, Dr. Peter Hotez, a professor of pediatrics and molecular virology and microbiology at Baylor College of Medicine, told CNN’s New Day on Thursday.

“We’ve never finished the first wave,” Hotez, dean of the National School of Tropical Medicine, said of spikes in new cases in Florida, Texas and Arizona. “We didn’t complete that social distancing period that we needed to do.”

Models showed states needed to extend stay-at-home orders through May, according to Hotez.

“Things opened up prematurely,” he said.

How states are trending

According to data from Johns Hopkins University:

Nationwide, more than 2 million people have been infected and 117,972 people have died of the virus. The virus claimed 755 lives Wednesday in the US, according to data from Johns Hopkins University..

Local officials are hoping to manage the spread by mandating mask usage.

A day after the city council failed to pass an ordinance, Montgomery, Alabama, Mayor Steven Reed implemented an executive order Wednesday requiring those in the city to wear face masks and coverings in public, according to a post from the city’s official Twitter account.

Arizona physicians have called upon Gov. Doug Ducey to implement a similar executive order statewide. While the governor announced Wednesday that he would be calling up 300 National Guard soldiers to help with contact tracing, he said he would leave mask requirement decisions to mayors.

Some local leaders are unlikely to follow the mandate, rendering it “a self-defeating executive order,” he said.

Earlier this week, nine Texas mayors, including those in Houston, Dallas, Austin and San Antonio, urged Gov. Greg Abbott to give them the authority to require masks be worn in public “where physical distancing cannot be practiced.”

The mayors and physicians have reason to believe the requirements could be effective. A study reported Tuesday found that an estimated 230,000 to 450,000 cases of the virus were prevented in states that required mask use between April 8 and May 15.

Loosening precautions and restrictions means more people are gathering in larger groups, which has, in some cases, swiftly resulted in positive coronavirus tests.

Pinal County, Arizona, Sheriff Mark Lamb announced Wednesday that he tested positive for Covid-19 and is self-quarantining for at least 14 days. He likely encountered an infected person at a campaign event he held Saturday, he said.

The county Public Health Department is working to track everyone he came into contact with, he said on Facebook.

Fauci told the “Learning Curve” podcast that shutdown policies across the country saved “millions of lives” during the pandemic. He predicted the National Football League season may not start this year, particularly if there is a second coronavirus wave.

“Unless players are essentially in a bubble — insulated from the community and they are tested nearly every day — it would be very hard to see how football is able to be played this fall,” he told CNN.

“There’s not going to be a post-Covid world for a long time,” she told CNN.

Earlier this week, a group of 16 friends in Florida said they all became infected with coronavirus after a night out at a recently reopened bar.

Still, Oklahoma, one of the states reporting a record-setting number of new cases, is scheduled later this week to host a campaign rally for Trump.

When questioned, Trump said he is not worried about attendees getting sick, though attendees must agree not to sue the campaign if they contract the coronavirus.

“Actually, Oklahoma has had a very low rate relatively speaking. It is a little spike, a small spike for a specific reason,” he said. “We’ll go there, everyone is going to be safe.”

Republican Sen. James Lankford of Oklahoma acknowledged to CNN the rise in rates, but said the rally should not be postponed and “we are pushing people to be attentive on this.”