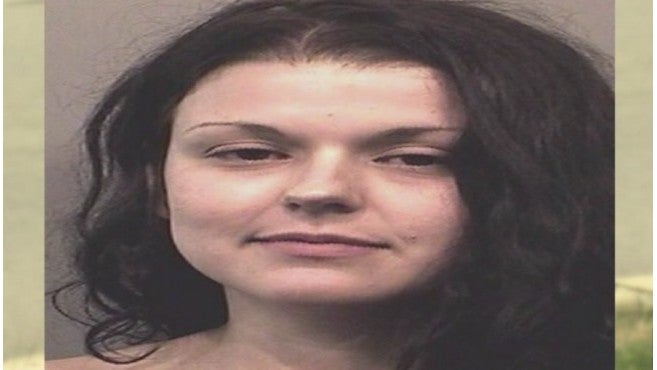 GREENWOOD, Ind (WISH) – Authorities said Thursday that a Greenwood woman offered sexual favors to a Johnson County sheriff deputy after he arrested her.

It started around 1 a.m. Wednesday with a crash on Smith Valley Road. It was a rude awakening on the Fourth of July for the Carnes family. A vehicle had crashed into their mailbox and awakened them.

“I knew it was more than a firework,” Tasha Carnes said. “We came out with flashlights and seen the mailbox, and went down to check to find out that the lady was no longer in the vehicle.”

The family called 911 and so did other neighbors who told police they saw the driver run off.

Inside the vehicle, police found identification belonging to 34-year old Michelle Cooley, according to a police report. Cooley lives less than a mile away from the crash scene.

They later found her walking. Officers who approached her said they smelled a strong odor of alcohol.

Mark Williams, who lives near the crash scene, said “That’s why they tell you don’t drink and drive. This isn’t good, having a drunk out there. It’s horrible.”

But, Cooley’s problems didn’t end there.

After officers arrested her and took her to the Johnson County Jail, she allegedly offered to go home with a deputy, promising she would “do special things” and offering him sexual favors, according to a police report.

“That’s prostitution also because she’s offering her body as payment for turning the other way,” Williams said.

But, officers did not turn the other way. Instead, Cooley faces a slew of charges.

“Now, you just have more charges. Wonder if it was really worth it,” Carnes said.

Cooley preliminarily faces of three OWI charges, including one indicating a previous drinking-and-driving conviction. She also was charged with leaving the scene of a property damage accident and coercion.

Officers tried to do a breathalyzer test, but Cooley allegedly refused. According to the police report, police requested a warrant to have her blood drawn. The report did not indicate the results of that test.

The case will be handed over to the Johnson County Prosecutor’s Office for a review before formal charges are filed in court.