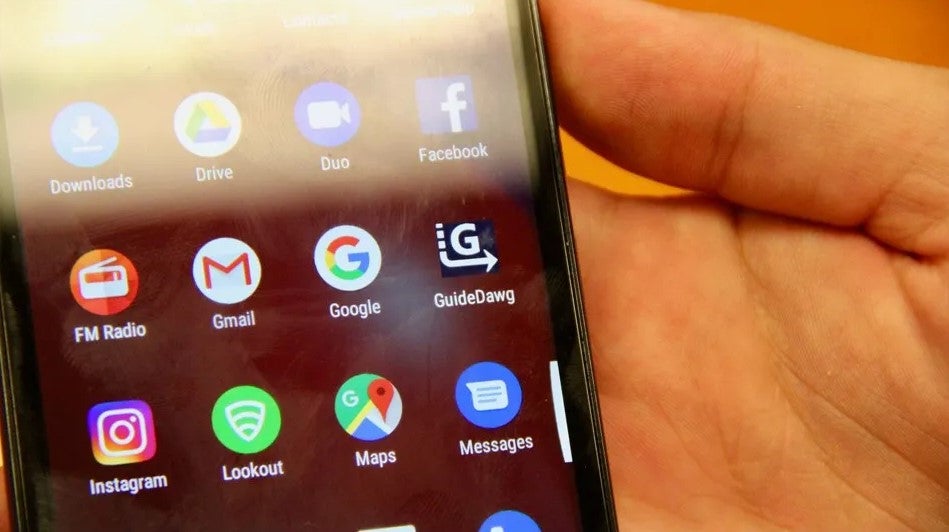 INDIANAPOLIS (Inside INdiana Business) — Navigating an unfamiliar college campus when a student is new can be difficult enough but imagine having the additional challenge of being visually impaired or blind.

A team of undergraduate students at Butler University is working on a solution. It’s a “Guide Dawg.”

Unlike a four-legged service canine, this companion is a digital guide for a smartphone.

“It’s an interesting challenge to try to make it so users can understand where buttons are very efficiently and effectively without seeing them,” says Ryan Graham, a senior studying computer science and on the GuideDawg 2.0 team.

“Originally the Indiana School for the Blind and Visually Impaired approached us and said, ‘We have this need here to help our students navigate on a campus,’” Linos said.

The school reached out in 2015 when he and a team of undergraduate students created GuideDawg 1.0. Now, the next generation is being developed specifically for the Butler campus.

The program is customized for the user. Programmers will add the visually impaired students’ class schedule and building location to help create a path to the classrooms.

The app will announce cues to the user and tell them the best path to take on campus.

“We are building those routes, from building to building from their dorm, to the cafeteria or from whatever they’re doing,” Linos said. “We know their schedule. So, we are storing this information in the cloud in a database, and then that information is pushed down to the app.”

Linos says students on his team are gathering the latitude and longitude of every door on Butler’s campus — every classroom, every entrance to Atherton Union and every bathroom.

The app will be updated to include construction sites on Butler’s campus to avoid the dangers.

“We’re in the process of adopting this technology where you put low energy Bluetooth devices called I-Beacons on construction areas and the app detects those,” Linos said.  “It warns the blind student when they’re approaching a hazardous construction area.”

Haley Sumner is a Butler alum who is blind. During her senior year, Sumner served as a consultant for the development of GuideDawg 2.0. She led developers on a campus tour. Sumner says accessible technology for the visually impaired has improved, and she thinks GuideDawg will further push the technology for users.

“Technology has come a long way,” said Sumner, who graduated in May and is pursuing certification as a life coach. “It needs to continue to be equal and inclusive for everyone. It will cultivate empowerment and diminish stigma.”

GuideDawg 2.0 is being specifically designed and programmed for Butler’s campus, but Linos believes the technology could eventually have broader use.

“We haven’t thought about generalizing it for other campuses, but I don’t think it’s going to be impossible. It could be done but it would need a little bit more thought,” Linos said.

Linos says the students will have enough of GuideDawg 2.0 complete to present at conferences next semester. Linos expects the app to be ready for launch for the fall semester of 2020.