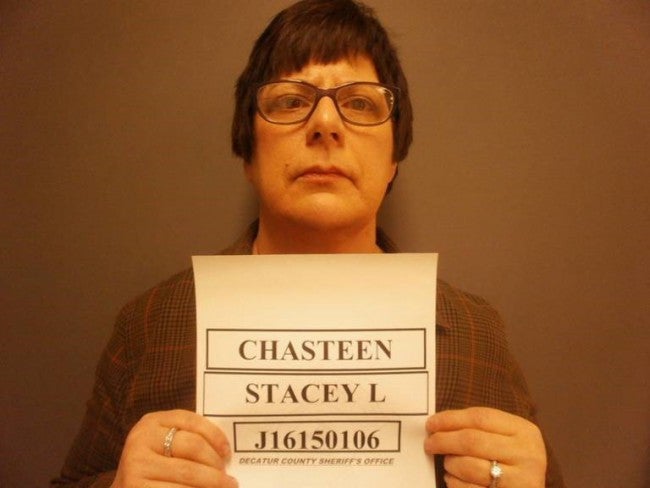 GREENSBURG, Ind. (WISH) – Police arrested former Greensburg police chief Stacey Chasteen Tuesday after she admitted to gambling away tens of thousands of dollars she stole from the department’s property room, according to court documents.

Chasteen was charged with one count of theft and one count of official misconduct. The Greensburg Police Department has been under investigation by Indiana State Police since January when ISP found discrepancies in the evidence room.

In November, Chasteen abruptly resigned from the department. Just a couple weeks later, a police department employee noticed $72,945 in cash missing from the property room. The money was there as part of an investigation into an illegal massage parlor, court documents indicate.

Police interviewed Chasteen’s husband, the Greensburg fire chief, who explained that his wife had a gambling problem and was borrowing money from family to pay back the money she took from the property room, according to court documents. Police also interview Stacey Chasteen, who said she began stealing money from the property room in 2006 and stopped some time during or after 2013. She also admitted to taking the $72,945 from the massage parlor case.

The Decatur County prosecutor said no other people will likely be charged in the case. Investigators also believe there was nothing stolen from the property room other than the cash.

The 49-year-old from Seymour turned herself into the Decatur County Jail Tuesday morning.