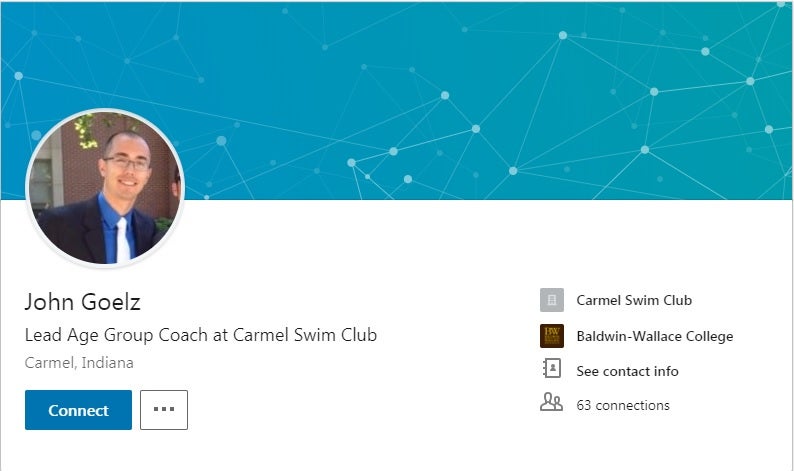 CARMEL, Ind. (WISH) — A former swim coach with Carmel Swim club and Carmel High School faces federal charges of child sexual exploitation and possession of child pornography after authorities say he engaged in a sexual relationship with one of the female athletes he coached.

John Goelz, 29 of Fishers, was arrested Tuesday and on Thursday remained in the custody of the U.S. Marshals Service. His detention hearing is scheduled for July 10, the office of the U.S. Attorney Josh Minkler announced on Thursday.

“Protecting our youth from sexual predators will always remain a top priority of this office,” said Minkler. “Those we put trust in to supervise and coach our children cannot be allowed to take advantage of them and will face tough federal prosecution.”

Law enforcement officials on June 29 learned that Goelz might have been involved in a sexual relationship with a female minor who he coached for both the Carmel Swim Club and Carmel High School’s swim team. Goelz was an employee of Carmel Swim Club and began volunteering as an assistant swim coach with Carmel High School in the 2015-2016 school year.

Authorities were able to determine from screenshots of text message exchanges that the relationship dated back to February 2018.

When a detective met with a juvenile male on June 29 at the Carmel Police Department, the juvenile told him he had seen private messages on Instagram between a 17-year-old girl and Goelz that appeared to indicate Goelz and the 17-year-old were in a sexual relationship. He also told the detective that the girl had admitted to him that she was in a physical relationship with Goelz, according to court documents.

The boy told the detective that the girl had previously provided him with the login information for her Instagram account, which is how he saw the private messages between Goelz and the girl, court documents say. He took screenshots of the messages and gave them to the detective. The boy told the detective that the messages, which refer to aspects of the sexual relationship between Goelz and the female minor, were the result of Goelz’s girlfriend sending messages directly to the female minor, according to court documents.

On July 2, the detective and a special agent with Homeland Security Investigations went to Goelz’s residence in Fishers with a search warrant. Goelz surrendered his cellphone and spoke to them about his relationship with the female athlete. In that interview, Goelz confirmed he coached the athlete on both teams and that their physical relationship began in February. He also said he had engaged in sexual acts with the female minor at various locations, including public parks in Hamilton County, his residence in Fishers and a hotel room in Anderson, court documents say.

Goelz said that on June 30 he had picked up the female minor and taken her to a hotel room in Anderson, where he filmed her performing a sexual act; detectives determined the video was still on his cellphone, according to court documents.

The 17-year-old girl was interviewed on June 30 and said she had engaged in sexual acts with Goelz multiple times between February and June. She also confirmed that she had been in a hotel room with Goelz on June 30 and believed he had filmed her during a sexual act, court documents say.

The investigation was conducted by the U.S. Immigration and Customs Enforcement, Homeland Security Investigations and the Hamilton County Metro Child Exploitation Task Force.

Carmel Police notified us that John Goelz was arrested earlier this week. We wanted to share with you the following information we have received from the U.S. Attorney’s Office. We have been advised that Mr. Goelz had an inappropriate relationship with a female Carmel High School student-athlete.

Mr. Goelz served as a volunteer assistant coach for the Carmel High school swim team and was also a coach for the Carmel Swim Club. He is not a teacher or otherwise employed by Carmel Clay Schools. He is no longer affiliated with either organization. We continue to be in communication with law enforcement in this ongoing investigation.

We are shocked and deeply saddened this has occurred. We will evaluate the situation as more information becomes available and will continue to do all we can to keep our children safe. We ask that you respect the privacy of the family involved during this difficult time.

If convicted, Goelz could face at least 15 years in prison, according to Assistant U.S. Attorney MaryAnn T. Mindrum.

If you have any additional information about this case, you’re encouraged to call the Hamilton County Metro Child Exploitation Task Force at 317-595-3361.