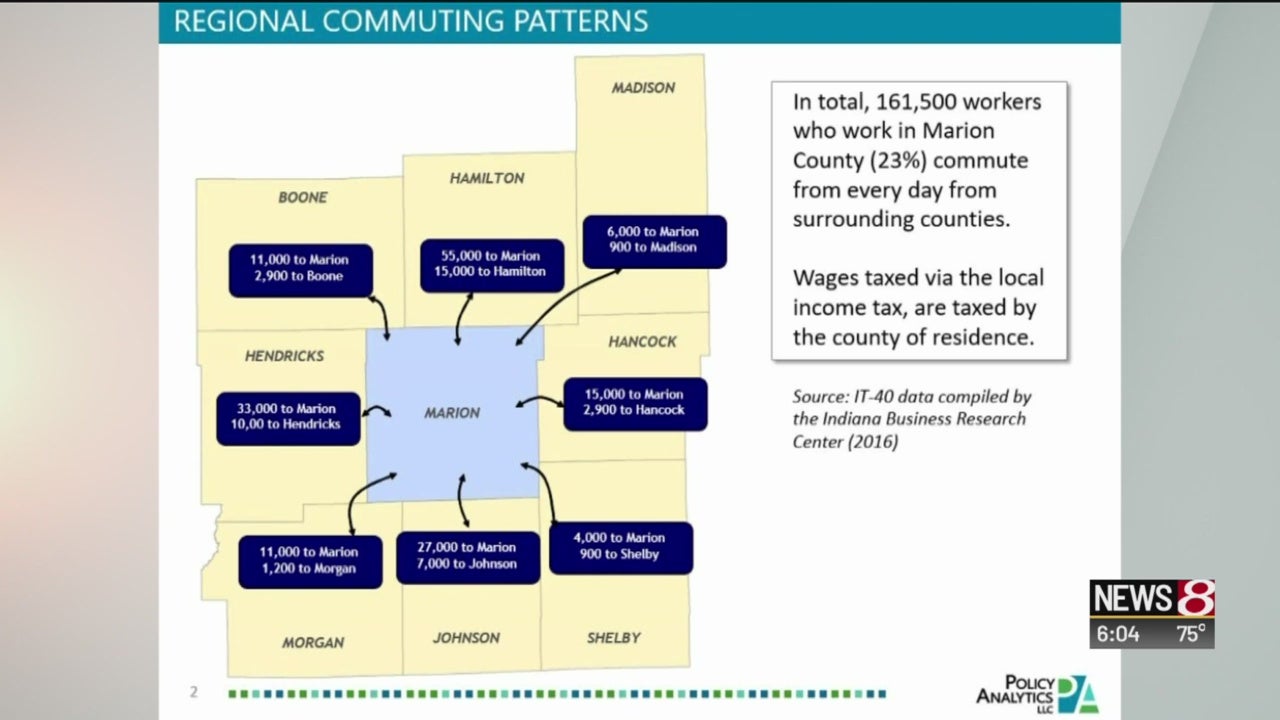 INDIANAPOLIS (WISH) — Mayor Joe Hogsett addressed a hot-button issue during his State of the City address on Wednesday: potholes.

He proposed a solution that focuses on commuters and suggested that surrounding counties pay into a regional infrastructure fund to help fix Marion County roads.

While many agreed the roads are a major issue, the solution received mixed reactions.

Hogsett’s proposal would take a portion of the 1% expenditure rate for nine counties — Marion, Boone, Hamilton, Madison, Hendricks, Hancock, Morgan, Johnson and Shelby — and put the money into what the mayor is calling a “Regional Infrastructure Fund.”

The money would go toward fixing Marion County’s roads that are not federally funded.

“A lot of people do commute downtown to work. So, I would say it is pretty important on the level of things to be done,” commuter Megan Ripley said.

Income tax is distributed to the person’s county of residence, which Hogsett says leaves Marion County left with the bill for fixing the roads that are used by more than 161,000 daily commuters from outside counties.

“I think a lot of people will probably be like ‘Not my road, not my problem. It’s not right by my house,'” commuter Briana Whitaker said.

She said motorists who are using the roads should pay to fix them.

City officials insisted the plan would not require a tax increase; the money would go toward bond payments that, Hogsett said, would be distributed to the most-heavily traveled road.

Commuter Whitaker said, “Especially getting off the interstate, it is pretty rough. Especially all the potholes and where they filled them in they didn’t fill them in very well so there are still divots everywhere.”

Commuter Brooks Bertl said,  “My initial reaction is I think I would like my tax dollars to stay in Hamilton County.”

But for now, many commuters we spoke to are willing to keep an open mind.

“I have in fact had a flat tire going through a pothole, not this year, but a couple years ago, and that is not a pleasant experience,” Bertl said. “I probably would consider in a limited or short-term option supporting that.”

Other city leaders in surrounding counties agreed the funding is an issue but would like to find a solution that ensures a benefit to the entire region.

Indianapolis leaders associated with the proposal said the next concrete steps that would need to be taken are unclear. They said discussions still need to be had involving the General Assembly making some type of regional governing body to better dictate the rules and restrictions involving this decision.