Hotplate may have sparked fire that killed 7 NYC children 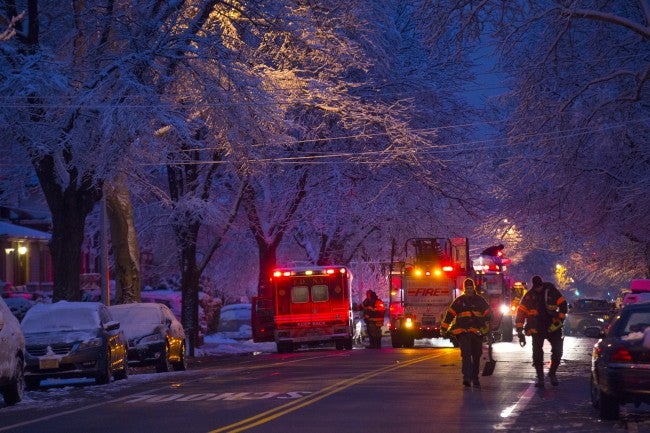 NEW YORK (AP) – New York City’s fire commissioner says a malfunctioning hotplate may have caused a fire that left seven children dead when it tore through a home in a heavily Jewish neighborhood of Brooklyn.

Commissioner Daniel Nigro (NY’-groh) says the deceased range in age from 5 to 15 years old. Nigro says a woman and teen who jumped from the second floor are hospitalized in critical condition.

Nigro says the woman is believed to be the mother of all eight children.

The fire broke out early Saturday at a single-family home in Midwood, a leafy section of Brooklyn known for its low crime and large Orthodox Jewish population.

Nigro says the hotplate was left on because of sabbath prohibitions against cooking.

More than 100 firefighters battled the blaze and brought it under control at around 1:30 a.m, about an hour after it was reported.

THIS IS A BREAKING NEWS UPDATE. Check back soon for further information.

The dead are children ranging in age from 5 to 15 years old, and they are believed to be family members, New York Fire Department spokesman Jim Long said.

Firefighters received a call at 12:23 a.m. about the blaze at a single-family home in Midwood, a leafy section of Brooklyn known for its low crime and large Orthodox Jewish population. Long said more than 100 firefighters responded and brought the blaze under control at around 1:30 a.m.

There was no immediate word on the cause of the fire. Long said it was being investigated by the city fire marshal’s office.

Fire officials had no other immediate details, but the New York Post reported the blaze occurred in a brick home.

The newspaper said that as firefighters worked to put out the fire, paramedics struggled to help the victims.

Neighbor Nate Weber told the paper that he saw children being wheeled away on stretchers.

“I just turned away. I didn’t even want to look,” he said.

Weber told the New York Daily News he heard the children’s mother yelling for someone to rescue her children after she jumped from a window.