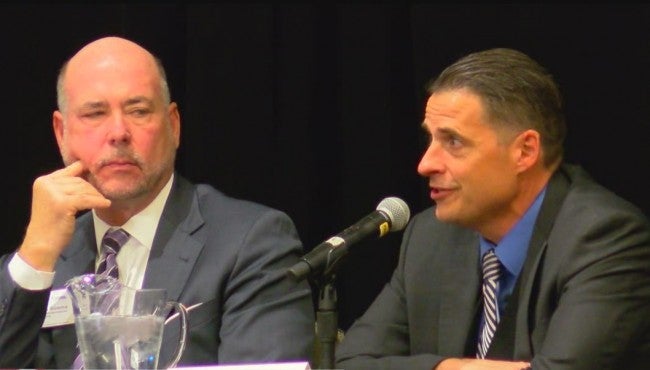 People talked about the key issues the Indiana Chamber is trying to push in the upcoming legislative session. Those include education, water, and healthcare.

First on the agenda: How to fill thousands of well-paying jobs in the tech, science and health industries.

State Rep. Scott Pelath, a Democrat from Michigan City (who is expected to step down Tuesday as the Indiana House minority leader), said, “We absolutely need to do a better job of talking to the employers themselves. They are the ones that know not what jobs they need today, but what jobs they’re gonna need five years from now.”

Which is partly why the Indiana Chamber of Commerce wants lawmakers to require computer science classes for all Indiana students and make it a graduation requirement.

State Sen. Tim Lanane, a Democrat from Anderson, said, “I don’t think it’s a bad thing. I think it will help prepare a workforce for these jobs that we’re seeking to come to the state of Indiana.”

Another chamber priority for this session is getting federal dollars to help fix the state’s aging water utility supply.

Greg Ellis, vice president of energy and environmental policy for the Indiana Chamber of Commerce, said, “Some of those pipes are leaking, environmentally; that’s not a good thing. We’re just wasting a valuable resource.”

The Chamber also wants to make health a priority. People within the Chamber said they support the state raising the smoking age from 18 to 21.

Other lawmakers see it differently.

Speaker of the House Brian Bosma said, “I have a bit of difficulty telling somebody they can go to Iraq and fight for freedom, but they can’t buy a pack of cigarettes.”

The issue of toll roads also came up. Bosma, a Republican from Indianapolis, said it’s an issue that needs to be looked at and talked about in the future, but not today. In terms of toll roads, Pelath said there are often other ways to finance our state’s infrastructure that people are far more supportive of.