Indiana lawmaker from Crawfordsville recovers at home after motorcycle crash 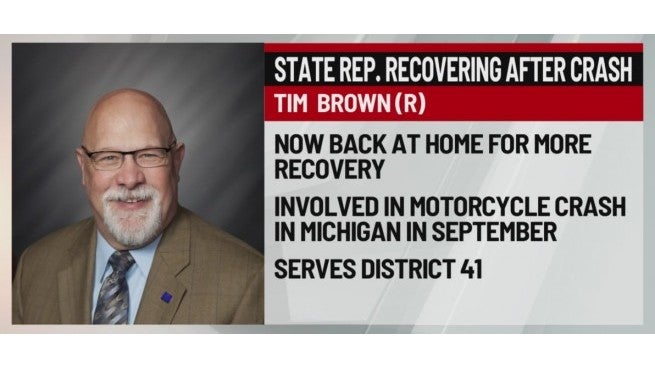 INDIANAPOLIS (AP) — Indiana’s House speaker said a top-ranking Republican lawmaker is recovering at home more than a month after a serious motorcycle accident in Michigan.

Speaker Brian Bosma said in a statement Thursday that House Ways and Means Chairman Tim Brown of Crawfordsville is in therapy and continues to improve. He did not elaborate on the extent of Brown’s injuries.

Brown was thrown from his motorcycle when an SUV pulled in front of him near northern Michigan’s Mackinac Bridge. He was taken in critical condition to a Michigan hospital where he initially was kept in a medically induced coma following the September accident.

Brown was on a trip with fellow Republican Rep. Mike Speedy of Indianapolis, who wasn’t injured.

Brown, a retired emergency room physician, has served in the Legislature since 1994.