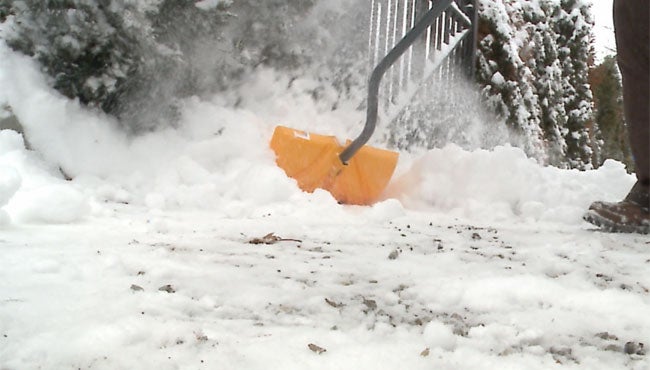 INDIANAPOLIS (WISH) – The Indianapolis Department of Public Works said it has contractors on standby to plow residential streets if the city had six inches or more of snow on the ground.

So far the highest accumulation DPW workers have found of the four locations where they measure is 5.2 inches. Therefore, the contractors have not yet been activated and residents are forced to dig themselves out of their homes.

Matt Dilly lives in the Meridian-Kessler neighborhood and was up early Saturday morning blowing away snow from his driveway.

“[I’m] making room for our cars to get in and out. It was a little bit of a surprise with the amount of snow we got,” said Dilly.

Removing the snow wasn’t too tough of a task for Dilly because he used his snowblower to get the job done. Meanwhile, Dilly’s next door neighbor, Andy Mulvey, stuck with the traditional way to clearing his driveway. Mulvey used his shovel.

“We’re old school. We like the traditional shovel.I enjoy shoveling. It’s a great chance to get outside and get a little exercise” Mulvey said.

Mulvey, an emergency room doctor, admitted using a shovel is back breaking work and he recommended anyone who sticks with the old fashion way of removing snow makes sure he or she is in good health.

Despite the manual labor caused by the snowstorm, both Mulvey and Dilly said they enjoyed seeing the snow.

“I know we’ve had several forecasts for a lot of snow and it didn’t always materialize, but this time it looks like they got it right,” Dilly said

While Mulvey said people should slow down and enjoy the sights.

“Get out and enjoy it. I think too often we don’t take full advantage of the seasons and the blessings of winter with the beautiful snow and before you know it everybody will be complaining about how hot it is,” Mulvey said