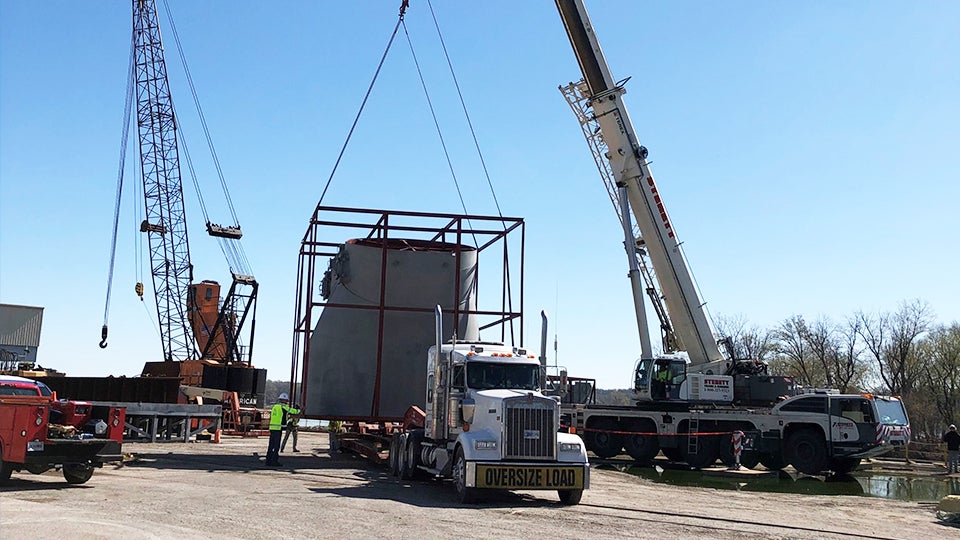 JEFFERSONVILLE, Ind. (Inside INdiana Business) — The Ports of Indiana-Jeffersonville has begun offloading large pieces of equipment for a $600 million project in Lawrence County. The port says it will receive more than 30 barges by the end of June carrying equipment for the expansion of the Lehigh Cement Inc. facility in Mitchell, construction for which resumed in February after a nearly year-long delay due to the pandemic.

The facility is located nearly 50 miles from the port in southeast Indiana. The port says more than 350 pieces of equipment and plant parts are being shipped by barge. Some of the equipment are as large as 100 tons.

Tracy Crowther, plant manager for Lehigh Cement, says the port has a reputation for quick and efficient transport of products by water, road and rail.

“The expansion project has a lot of moving pieces and given the delay last year, timing, cost-savings and logistics is critical to keep things moving forward,” Crowther said in a news release. “It is a huge benefit to utilize the port that also happens to be in our backyard.”

The equipment will travel by truck from the port to the facility in Mitchel. The Indiana Department of Transportation says more than 80 super loads are scheduled to travel the distance during the summer and fall, creating some traffic restrictions. However, INDOT says the super loads will be moved in small convoys during overnight hours.

Plans for the expansion were first announced in July 2018 and officials broke ground on the project in October 2019. However, Lehigh Hanson delayed the project in late March 2020 as the pandemic took hold in Indiana and around the country.

Lehigh Cement says the project will create about 50 jobs once the new plant is operational in 2023.